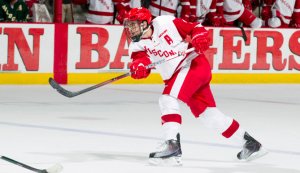 Before the NHL’s free agency kicked off, University of Wisconsin defencemen Justin Schultz was deciding on which NHL team he would start his professional career with. Originally a second round draft pick of the Anaheim Ducks in 2008, Schultz became an unrestricted free agent after his contract expired on June 24th, 2012. Schultz and the Ducks were unable to finalize a deal to keep the highly regarded prospect with the organization creating a unique situation for the US college player.

If you want a defenseman who can control a power play, make great outlets, be creative with the puck, hit his passing targets through tight seams, and know when to join the rush, then Schultz is your guy.

Schultz’s coach at the University of Wisconsin, Mike Eaves, pointed out his past success as an indication of his future potential (Calgary Herald):

To handle the demand for his services, Schultz and his representatives from Newport Sports fielded offers from various NHL clubs. Now keep in mind, Schultz has never played in the NHL, yet NHL managers were flying to Toronto to persuade him to join their clubs. Since the maximum he could make as a rookie was $925,000 over two years, an amount that could fit within any teams payroll, managers had to sell other benefits such as the opportunity to play with certain players, amount and type of ice-time, the marketing opportunities and perhaps even the city.

As great as it is for a 22-year old prospect to be sought after by NHL teams, the perception that this has caused raises some issues. Fans quickly took to Twitter and various message boards to express their belief that Schultz was a greedy, prima donna type player. Regarding a player that they know little about, fans questioned his hockey potential and personal character. Among the comments people had were comparisons to the process taken by NBA superstar Lebron James to sign with the Miami Heat in 2010. James’ highly publicized departure from Cleveland invited the scorn of fans who thought it was insulting to make a spectacle of the decision.

The attention Schultz drew from hockey fans was interesting in that he did nothing wrong to be in the situation he was in. He could not agree to a contract, which is very common for players, including prospects. He qualified for free agency, which is rare for a prospect, but is outlined in the collective bargaining agreement. As pointed out by Jason Gregor of The Nation Network, at no point has Schultz been described as some sort of superstar in the making. Comparisons to other players have been made giving the sense he could turn out to be a decent player, but he’s a prospect nonetheless. Yet the discourse surrounding Schultz’s decision process has increased the expectations of this player and unfairly raised his notoriety.

How it has come to this can be explained a few different ways.

Past the speculation surrounding the game and the social media tools used by fans to participate is a basic desire between human beings to connect. To get to know one another and develop communities, we communicate using tools and find a common bond, whether it’s a topic or a person, to exchange our values. These values are developed through experiences and preconceived biases, but serves as a foundation to the development of relationships and social networks. Unfortunately, since there is little known about Schultz, the majority of the discussion is speculation, which can be easily led astray by gossip, biases and assumptions. Since 29 teams were trying to sign him, a lot more fans were aware of the story and began discussing its developments with one another.

Secondly, the negative perception of Schultz has been fuelled by cognitive dissonance, which is caused when individuals hold conflicting beliefs or ideas simultaneously. For example, fans read about their favorite teams managers, who are seen as powerful decision makers, flying to Toronto to meet a young prospect who gets to have the final say on where he gets to continue his development. In the meantime, news quickly spreads that this player has upset his previous manager in Anaheim and is getting offers of quality ice-time and performance-based bonuses. This scenario goes against our view of players as commodities who get moved and signed regularly and are at the mercy of team owners and managers. Schultz ended up signing with Edmonton, but I cannot imagine the backlash he would have received if he rejected the Oilers after the legendary Wayne Gretzky put in a call to the player.

Fans are a critical component of professional sports, so it is no surprise that a discussion has occurred surrounding Justin Schultz’s decision. What is concerning is how negative the comments have been regarding his hockey career and personal character. It remains to be seen if Schultz pans out to be a decent defenceman as he’s been projected to be. However, the expectations and notoriety that has been a byproduct of his decision-making process will follow him for the rest of his career.

One thought on “The Justin Schultz Sweepstakes”