Teammate: I saw you on the television.

Me: What was I doing?

Teammate: You were at a book launch.

That book launch happened to be for Rhonda Leeman Taylor and Denbeigh Whitmarsh’s Offside: Challenges faced by women in hockey. It was a small but mighty gathering on October 5th at the Original Hockey Hall of Fame in Kingston, Ontario to celebrate a much needed narrative about the development of women’s hockey in Canada. We were all kindly gifted copies of Offside and I managed to read the whole book on my recent flight from Toronto to Vancouver – it’s the first time I’ve ever read an entire book in one sitting.

If you don’t know much about Leeman Taylor, she was an instrumental force for organizing and legitimizing women’s hockey during the 1980s. She was the first woman to earn a salary with the Ontario Women’s Hockey Association and spearheaded the first national tournament. She was also the first woman to sit on the board of what would become Hockey Canada. Her memoir is an easy and entertaining read that serves to thank many of the people who helped get girls and women’s hockey to where it is today.

The lack of documentation about women’s hockey in Canada is an injustice. In Western tradition, pen to paper is what determines value. It’s not the only way that we recognize who and what matters but it is a very dominant form of recognition. Therefore, any stories that we can add to the script of women’s hockey in Canada is a significant contribution. The sexism that Leeman Taylor faced throughout her journey was persistent and by writing it into her narrative she ensures that institutionalized discrimination does not disappear into the annals of history. Leeman Taylor explains in the book’s opening chapter:

I’m not telling my story because it is unique; I’m telling it because I know there are thousands of other women out there who have faced and overcome challenges similar to my own. I do not aim to speak for these women, but rather, beside them.

It was interesting to read about how Leeman Taylor’s hockey career started on the outdoor rinks at Victoria Park in Kingston because I meander by those rinks everyday on my walk to campus. She details her days playing for the Kingston Red Barons and how seeing the Queen’s University women’s team, at the age of 12, gave her a goal for which to aspire. She would eventually play for the Queen’s Golden Gaels…err, correction, at that time they were referred to was the Golden “Gals” because heaven forbid the men’s and women’s varsity teams be called the same thing. She revelled in the resources made available to the women’s varsity team: a dressing room, a Greyhound bus, matching equipment and uniforms, and their own trainer.

The media visibility for Queen’s was another factor that contributed to the perception that we were playing high-level hockey. We had our pictures taken and many of our games were covered in the campus newspapers….All in all, the exposure and paid expenses made this kind of treatment seem like the best a woman hockey player could ask for in those days. We felt like elite-level athletes in the closest thing to a professional league that we could get.

A photo from one of my early morning walks through Victoria Park. Behind those high piles of snow on the right sit two outdoor rinks.

To this day, the Queen’s women’s varsity team does not have a Hall of Fame (even though the men’s team does), and Leeman Taylor points out how this…oversight…affects legacy donations. Similarly, the New York Times recently published a piece about how the women who benefitted from Title IX legislation are becoming significant NCAA donors. Title IX refers to the 1972 U.S. Education Amendments Act that ensured federal funding had to be spent equally between men and women, which opened up a plethora of sports opportunities for women. Jere Longman explained for NYT, “Given the insatiable hunger of universities for academic and athletic philanthropy, women are increasingly being targeted as donors. At the same time, women are more often initiating contact with athletic departments than in the past.” And, to Leeman Taylor’s reflections on the good life of university hockey, little did anyone realize that university hockey would remain the benchmark of professionalism for the vast majority of women’s hockey players for the foreseeable future.

Let’s fast forward to 1982, when Leeman Taylor managed to pull off the first Women’s National Hockey Tournament because it is a great example of what kind of support women’s hockey has received historically, and some of the traction it has seemingly lost along the way:

It may sound crazy in this day and age, but I ended up knocking on the doors of a half-dozen big brand-name corporations to ask if their companies would be willing to sponsor our Championship. I literally walked into these impressive corporate boardrooms holding nothing more than an audacious vision and a few press clippings about the growth and popularity of women’s hockey in the nation.

She wasn’t receiving a lot of corporate support because girl’s hockey was still seen as a controversial issue but Shoppers Drug Mart stepped up in a big way to become the title sponsor of the, “Shoppers Drug Mart Women’s Nationals.” Shoppers signed “on to a major three-tier, three-year sponsorship deal” and agreed to:

C’mon back Shoppers! We need you again! Naturally, once Shoppers signed on as the title sponsor, other large brands like Planter’s Peanuts and Scott Paper also joined as sponsors. Gumption may account for landing this particular sponsorship but Leeman Taylor also had the time to go door-to-door because securing the future of women’s hockey was her full time job, albeit in a fragmented way. Time and resources is what women’s professional hockey is missing today to help it lock down some of those necessary financial sponsorships. A part-time effort naturally results in a part-time league. This is not a comment on intentions or desire for more and better, rather it was the reality of the CWHL.

Furthermore, the media coverage for the first National Championships rivalled any of the former CWHL’s best efforts, with The Globe and Mail, the Toronto Star, and Hockey News all helping to promote the tournament. But what’s more, Leeman Taylor:

arranged through the Hilda Wilson Group to have game results wired via telegraph to be aired on radio and television with The Canadian Press, United Press of Canada, Broadcast News, and Standard Broadcast News stations. Standard Broadcast News was connected with CFRB, as well as 57 other radio stations all across Canada, meaning people from sea to sea could keep up with the final scores at the end of every day.

Game scores by telegraph! Even with today’s social media it can be difficult to find and follow women’s hockey; yet, in 1982 there was enough cooperation and political will to ensure that this first attempt at a National Championship received nation-wide coverage.

While reading Leeman Taylor’s life story I couldn’t help but wonder whose stories will soon end up beside hers. This history, like the history of women’s hockey more broadly, is a story of how hockey came to be for white women in Canada. I’m not saying that Leeman Taylor’s book should incorporate anyone else’s story because it is the way her life unfolded, but as she points out herself, there are thousands of other women who were part of the same fight. We have been gifted one book for the shelf but whose stories are yet to be formalized into writing? 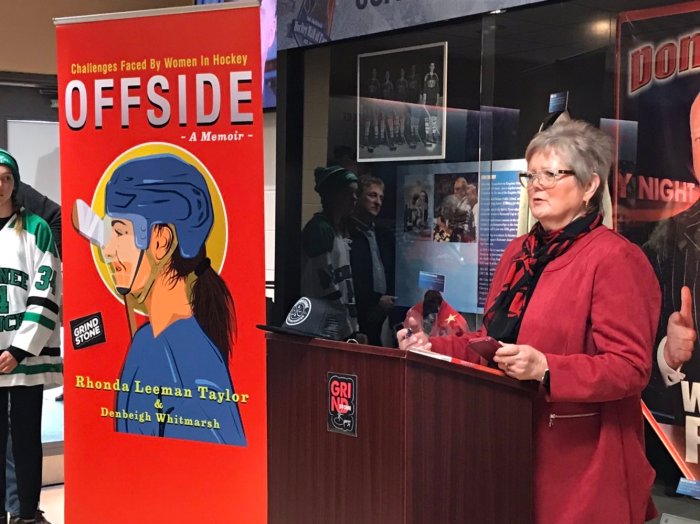 Rhonda Leeman Taylor at the book launch on October 5, 2019. Photo by Courtney Szto.

For example, Bev Beaver is one of Canada’s better known Indigenous hockey trailblazers. During the 1960s, while Leeman Taylor was trying to hide her long hair from the boys at Victoria Park, Beaver was also trying to disguise herself while playing with the boys on the Six Nations Reserve. Despite the fact that Beaver was a star for that team, girl’s were not allowed to compete in organized hockey at residential schools. It was in residential schools where Indigenous children were to be “civilized” into Canadian gender norms. Thus, how might stories of Indigenous girls and women’s experiences help add further texture to the history of women’s hockey in Canada?

We are slowly learning more about the Colored Hockey League of the Maritimes from the late 1800s but Black women do not feature in those stories. It could be because they did not play hockey then, but the more one learns about the history of women’s sports around the world, the more we understand that where there has been sport, there have been women. Even when Brazil banned its women from playing soccer from 1941-1979 they continued to play. Brenda Elsey and Joshua Nadel assert in their book Futbolera, “Women’s sports were always there, but always existed just below the surface and remained on the margins of acceptable behavior.” This is the unfortunate thread that ties women’s sports together around the world.

I would like to close this piece with a couple of stanza’s from a poem published in the appendix of Offside titled, “I’m a Hockey Player.” The last line made me chuckle aloud on the plane:

“I played hockey,” piped up the third.
“Even though my parents thought it quite absurd.
Getting up at 5:00 a.m., borrowing equipment from my brother,
Was the ritual to get out on the ice along with the others,
No money I gained, I am not known.
Believe me, St. Peter, the happiness brought cannot be shown.”

“The frustrations endured you’ve handled them well,
Being involved in female hockey has been your stint in hell.”

If you’re looking for a hockey-inspired stocking stuffer or just want a good women’s hockey read, go pick up a copy of Offside. A portion of every book sold goes to The Grindstone Award Foundation to help girls offset the cost of hockey participation through grants. And, if you want to make it a gift bundle of hockey’s history and its future, consider adding a ticket (virtual or real) for the PWHPA’s upcoming Toronto Dream Gap Tour showcase to go along with it.

Elsey, B. & Nadel, J. (2019). Futbolera: A history of women and sports in Latin America. Austin: University of Texas Press.