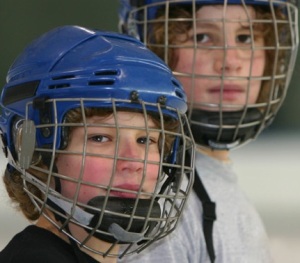 There are two major reasons cited for not making visors mandatory in the NHL. Reason #1 – because it is player preference and reason #2 – the visor makes the helmet that much harder to pop off and thus would curtail hockey fights. I do not write this blog to sway players or fans to either side of the argument but rather to reflect on what the visor represents in the world of hockey and the evolution of a player.

All children who start playing hockey must wear a full face cage or shield.  There is no debate on this whatsoever. Children and their innocence must be protected! So from day one, every player who has made it the NHL has done so by learning the fundamentals of the game wearing a full cage or shield.  Some years down the road the select few who make it to major junior hockey are allowed to move to the half shield/visor.  Oddly enough, the visor is worn in adolescence of age as well as in adolescence of hockey development. You are not yet a professional but you are on your way to being one (you are not yet a man but you are on your way to being one).  You still need protection at this stage but you are also gaining some freedom. Hence the visor represents a curfew, if you will, a way of letting you experience life but still under the watchful eye of guardians.  It provides a fresh perspective and a peace of mind that if needed you will have someone (or something) protecting you.

Finally, you are drafted to the NHL and voila – your transition into hockey manhood is complete, that is once you get rid of the visor.  The visor is the last bastion of protection for the face and of your youth because now that you are in the big leagues you literally have to face the world head on and, ideally, without anything between you and your opponent. Nothing to distort the pain or rewards that life has to offer.  As a man, one is expected to take responsibility for his dealings, in other words, if someone clips you in the face with his stick then you should “tough it out” and deal with the consequences.  A lack of visor represents freedom, independence and both mental and physical fortitude. Metaphorically, you are free from the watchful parental eyes and it’s time to branch out on your own.

Every professional player has had to travel this road, so I find the argument of player preference odd because it was never a choice before the NHL.  The visor represents so much more than preference or eye protection, it represents paying one’s dues, going through the system, evolution and arrival. It illustrates a shift from innocence to uncensored reality.  So you see, the discussion of “to visor or not to visor” is far more complex than player preference and audience excitement.  When you think of it as an evolution of the player, I think we can all understand why some would choose to go sans visor, or to keep with the metaphor move away from mom and dad (or dad/dad, mom/mom, grandpa/grandma etc.). Therefore, in order to sway public and player opinion on the visor issue is really more a question of how do we alter the evolution of a player to include or accept a preservation of innocence well into adulthood?

*Please note that women’s hockey has no option of player preference and every woman who has competed in the game has done so wearing full face protection. Read what you will into the stage of growth, or lack thereof, for women’s hockey based on the cage/full face shield alone.  We make no qualms about protecting women from the reality of pain, which although is not necessarily equitable treatment I think in this case was the wise decision. So why are men spared from this type of protection?  Is it because they handle pain better than women (before you answer that think child birth) or is it because society has arbitrarily decided that men and women should experience sport (and life) differently?  As few choices we think women have I think it is time to address how few choices men actually have.  Men are often sold an illusion of choice, where very few actually exist.

11 thoughts on “Visors – An evolution of manhood”