It is an annual tradition that various US-based championship teams get invited by the President to visit the White House to be honoured for their accomplishments. I am not certain how far back this practice dates, but at least can confirm that it was already an established tradition as early as 1985. Usually these visits are jovial and non-confrontational affairs, with the height of controversy usually peaking with President Obama cracking jokes about the superiority of Chicago sports teams. That being said, as Greg Wyshynksi noted on Puck Daddy earlier today, the President does sometimes get snubbed by athletes. Obama, for example, has for various reasons had a retired and current NFL player and a number of NASCAR drivers turn down invitations to visit the White House.

Yesterday, as the 2011 Stanley Cup Champion Boston Bruins paid their visit to the White House, a controversy erupted as superstar goalie Tim Thomas refused to attend. Thomas has made no secret of his support for the Republican Party (link via Puck Daddy), although in his statement on the matter he insinuated that he would have declined the invitation even if the current President was a Republican. Although Thomas stated that his choice “was not about politics,” his full statement on the issue indicates that it was absolutely politically motivated. Via NHL.com, here is Thomas’ full statement on the matter:

I believe the Federal government has grown out of control, threatening the Rights, Liberties, and Property of the People.

This is being done at the Executive, Legislative, and Judicial level. This is in direct opposition to the Constitution and the Founding Fathers vision for the Federal government.

Because I believe this, today I exercised my right as a Free Citizen, and did not visit the White House. This was not about politics or party, as in my opinion both parties are responsible for the situation we are in as a country. This was about a choice I had to make as an INDIVIDUAL.

This is the only public statement I will be making on this topic. TT

On Twitter earlier tonight I asked the following question as a result of this incident: 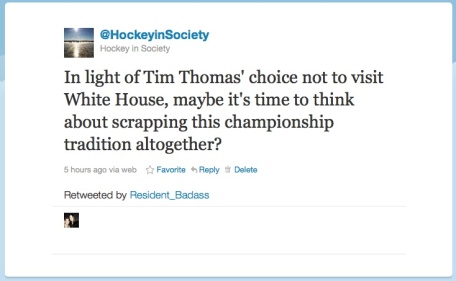 After some back and forth with some Twitter users who disagreed, I realized that I need to more fully explore this question given that my subsequent tweets were vague and I feel that Twitter is too brief a medium to fully explain my thoughts on this issue. Ultimately to me, the answer to this hinges on the answer to one key question: are the visits of athletes to the White House political (or partisan) acts? After the jump, I explore this issue in more depth.

Reaction to Thomas’ decision made waves across the hockey blogosphere and Twitterverse. Journalist Slava Malamud did not mince words in criticizing Thomas on Twitter (via Backhand Shelf), linking his decision to the broader right-wing animosity toward Obama:

Good on Thomas for using this moment — where a professional sports team participates in what’s both an honor for its accomplishments and a political photo opportunity — to make a political statement of his own. . . .

It’s a moment in which a professional athlete uses his fame, his influence for something he believes in, and does something that won’t be popular among fans or media. Sean Avery did the same thing: Potentially alienating his teammates by taking a political stand on gay marriage.

If he’s celebrated and Thomas is demonized, what does that say about our real tolerance of free speech? That it’s only free when we agree with it?

So what do we make of Thomas’ bold political statement? Is Thomas insulting the Office of the President by refusing to visit Obama? Or is he an American patriot who is willing to take a strong moral/political stand for what he believes in?

This is where I return to my initial question: is the celebration of sports championships at the White House a political act? As a sociologist I would instinctively say yes, because my definition of what is political is considerably wider than that of many people and I therefore see sports as very much wrapped up in broader social, political, and economic issues (as regular readers may have picked up on by now!). But for this discussion I am willing to (at least temporarily) leave aside the ideological implications of the NHL and the sport of hockey in order to more clearly focus on this particular episode. So perhaps I should rephrase the question: are these White House visits partisan acts?

The reason I think this question matters is because it completely alters how one views Thomas’ decision. As a Canucks fan I am not particularly fond of Thomas (for obvious reasons) and as a left-leaning individual I do not agree with his politics. However, if the visit of Stanley Cup champions to the White House has partisan overtones – inasmuch as it is a publicity event designed to cast the President, regardless of his political affiliation, in a positive light – then I would support Thomas’ decision to refuse to participate in a spectacle that clashes with his own political beliefs. If it is not a partisan event, then I would say that Thomas is at fault for turning an apolitical gathering into an opportunity to make a political statement.

Wyshynski certainly sees the visits as having political intent:

And for the “separation of politics and hockey” crowd — that flies out the window when you agree to be a backdrop to a speech in an election year. Or any year.

In other words, regardless of their personal political viewpoints, NHL players and other athletes who visit the White House are tacitly contributing to a spectacle that, through the positive press afforded the event, advances the political agenda of the current President. A counterargument to this view would be to cast the event as nonpartisan – rather than being hosted by a Democrat President, the Bruins were hosted by the Office of the President. The obvious support for this argument, of course, is the fact that the Bruins would have been invited had a Republican been in the White House – these visits happen regardless of the President, and thus could be seen simply as nonpartisan celebrations of sporting achievements that have no political symbolism beyond the Office of the President recognizing a championship team.

I tend to err more on the side of Wyshynski’s argument that attending the White House is an inherently political act; however as I mentioned I tend to read politics into things more than the average person. Nonetheless, I think Wyshynski is right to note that, intentionally or not, the players at these ceremonies serve as a “backdrop” to a political spectacle with partisan implications. I can’t think of many politicians who turn down a photo-op, so even though these ceremonies are seemingly nonpartisan they could certainly be leveraged to provide support for a President with an obvious partisan agenda. This seems particularly likely with Obama, who much like George W. Bush, and many other past Presidents, seemingly uses sports strategically to help craft his Presidential image.

This discussion leads, in a roundabout way, back to my original question on Twitter: is it time to rethink these White House celebrations? If they contribute toward the advancement of a partisan agenda, should athletes be made into pawns in a much, much larger political chess game? And on a practical note, if principled stands like that of Tim Thomas become the norm amongst athletes, how much longer can the tradition survive without becoming an ugly, divisive, and partisan annual event? And where does the line get drawn (and by whom) about what is acceptable free speech? As Malamud provocatively states: 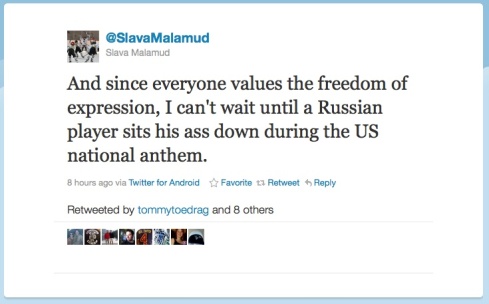 While I don’t necessarily agree that Malamud has reached a logical conclusion here, I see his point. Would those who applaud Thomas for being a “Free Citizen” offer the same platitudes to athletes who used their status to make more subversive political statements? It was admittedly 44 years ago, but the experience of John Carlos and Tommie Smith at the 1968 Olympics would suggest not. More recently, athletes such as Carlos Delgado have drawn flak for making political statements – in Delgado’s case, for not standing for the US national anthem. Heck, the NFL’s Jeremy Shockey even created a mini-controversy by accusing opponents of disrespecting the anthem by not placing their hands over their hearts. The possibility of an ideological and/or partisan double standard for athletes who make political statements is certainly an interesting topic and one that deserves further scrutiny.

Based upon this discussion, I suppose my ideal situation would be that the President (or Canadian Prime Minister, who incidentally presently exploits hockey with great skill to further his political agenda) butts out of sports, at least to the degree of staging photo ops with athletes and teams. Make a congratulatory phone call? Sure. Send a nice note of support? Fine by me. But making a public and political spectacle out of athletes and sports teams? That is where I start to get uncomfortable.

But given that the White House celebration is, for now at least, a firmly entrenched tradition, my ideal vision will clearly not be realized. And in lieu of that possibility, this becomes a very murky and complicated topic – as proven by the fires of outrage and adoration toward Tim Thomas that are presently raging unabated.

25 thoughts on “Mixing Politics and Hockey: Should Tim Thomas be Condemned for Declining President Obama’s Invitation to Visit the White House?”