Sadly, this was one of the less-offensive of the many derogatory tweets about Joel Ward this evening.

Less than two weeks ago, after Joel Ward scored in overtime of Game 7 to lead the Washington Capitals past the Boston Bruins, some hockey fans (many of whom identified as Bruins fans) took to Twitter to hurl racist abuse at the black Canadian forward from Toronto. While many fans of the Bruins and hockey more generally objected vociferously, clearly a significant amount of fans felt completely comfortable deploying racist epitaphs to insult the hockey player.

Tonight, Ward took a devastating penalty for the Capitals when, with just over 20 seconds remaining and the Capitals nursing a 2-1 lead, he high-sticked the New York Rangers’ Carl Hagelin and drew blood. The Rangers scored before the buzzer to send the game to overtime and then, with Ward still serving the second half of his double-minor, won the game on a goal by defenseman Marc Staal.

And then the Twitter racists returned in full force.

[WARNING: STRONG AND OFFENSIVE LANGUAGE APPEARS IN THE FOLLOWING IMAGES]

A few weeks ago I submitted a revised version of a paper to an academic journal that examined the ways in which hockey fans used Twitter to react to and resist the dominant messaging presented in a hockey media broadcast. The paper is quite optimistic about the possibilities of new media as an avenue for the promotion of alternative understandings to dominant media representations of social and political issues. While I maintain this belief, I feel it is also important to recognize the ways in which new media, such as Twitter, can be used in conservative and anti-progressive manners. Tonight, sadly, offered such an occasion.

Usually on this blog I try to be analytical and thoughtful about the topics under discussion. This post is very reactionary, with the data I present collected less than two hours ago. The point is merely to explore and highlight the range of racist statements that, for whatever reasons, some people feel compelled to post on Twitter. I will save the analysis for another day – instead, I presently offer a raw and not very well thought-out examination of some of the more egregious statements about Ward from Twitter users. 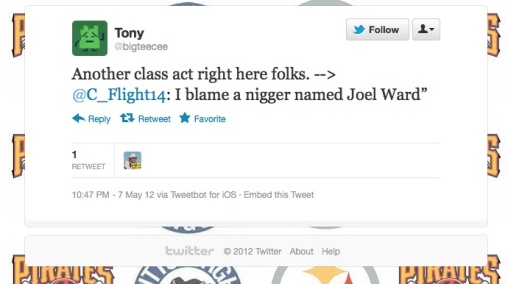 Unfortunately the n-word made at least a few appearances this evening. By the time I collected these tweets, @C-Flight14 had thankfully been suspended from Twitter. However, his racist tweet lives on in the re-tweets and reactions of other users.

@JackScholl did some unconvincing backpedaling. Because jokes about lynching black people are apparently acceptable if you recognize that they are overly harsh within 30 minutes of making them.

@JaredGaspar sparked a firestorm when he tweeted his plantation comment. After a huge amount of backlash, he deleted the offending comment. The tweet, of course, had already gained infamy and was reproduced countless times over in retweets and responses, such as those by @tbridge.

At first @JaredGaspar found the attention, particularly when it was racialized, amusing. But then…

… the backlash became more severe. Of course, justifying an action by saying that worse things have been done by others is not exactly an airtight defense. @JaredGaspar tweeted many more provocative statements and weak excuses in defense of his initial tweet in the space of less than an hour. Needless to say, tonight he quickly and unexpectedly became a Twitter sensation because of his racist comments.

Unfortunately other Twitter users felt the need to pull out the n-word to insult Ward. The audacity of the racist vitriol is as astounding as it is depressing.

Thankfully many Twitter users fought back against racist Twitter users, and from what I observed there was a significant collective backlash from many hockey fans against the minority of racist fans. This suggests that new media such as Twitter may be somewhat self-regulated by users, with the majority – in this case, anti-racists – shouting down the minority. While this may seem promising, what happens if the majority support the reactionary, fear-based, and/or anti-progressive position?

Beyond my initial knee-jerk emotional response, I don’t have any profound analytical comments about this latest episode of Twitter racism in hockey. There is much to unpack here: hockey’s overwhelming whiteness; the increasing societal tolerance of overt racism; the status of black athletes in North American sport; the seeming invisibility/invincibility felt by so many Twitter users; the myth of a “post-racial” North American society; and many other issues, I’m sure, that are not currently springing to my mind. But I’ve yet to work through these thoughts, so I’ll leave the final word to @FauxCommish. Sometimes simple statements sum it up best (although replace the word “sad” with “revolted and angry” and it’s a little more accurate):

12 thoughts on “Once again, hockey fans take to Twitter to hurl racist abuse at Joel Ward”