Here comes yet another post about the ice-hockey phenomenon in the context of a small central European country – Slovakia. This time I shall be looking closer on the Slovak goalies… or, better to say, their image. It seems that these clumsy looking guys in their oversized gear steal the hearts of many, both at home and abroad, and not only because of their saving skills.

“You don’t have to be crazy to be a goalie, but it helps!” This quote from Bernie Parent could be altered into a form: “you don’t have to be a clown to be a Slovak goalie, but it helps”. And even if not all the goalies born and raised in Slovakia are the jolliest of their squads, they would definitely be regarded as really “nice guys”… basically, guys anyone would love to grab a beer with. Now is that some general trait of all the goaltenders? Or is there just some national bias regarding one’s “own” players?

Vladimír Dzurilla, the cult Czechoslovak goalie and a refrigerator repairman by profession, is one of the few hockey players, and so far the only goalie, who has an ice arena in Slovakia named after him (the other two “named” arenas are in Trenčín: one being a sponsor project of LA Kings forward Marián Gáborík and the other the town’s stadium named after the late Pavol Demitra). Though Dzurilla passed away in 1995, being three times world champion and an Olympic medalist (not to mention the other six medals from the World Championships) he stills lives in the popular memory of the proud Slovak hockey fans as their genius, but also congenial, goal keeper. The most comic moment of his career, as he would remember, was how he tripped and fell on his butt while his name was being announced to the Montreal crowd at the 1976 Canada Cup. Well, his saving skills at this event made his name known in a much better light.

If I move in time to the present day Slovakia, there are at least five noticeable followers of Dzurilla’s “good guy goalie” tradition. Ján Lašák, who in 2002 helped to win the so far only World Championship gold since the country’s independence, was considered as the clown of the national team and therefore he would often appear on joke commercials or be invited as a guest to comedy talk-shows. Jaroslav Halák’s name (and saving skills) were a perfect reason for a “Halaaak” viral video made by Montreal fans in 2009/2010 season. Ján Laco, who was named “best goalie” of the 2012 World Championships, started his representational career that very year, aged 30, making all the Slovaks greatly sympathise with this humble, nice and yet quite underestimated player. Well, and the latest crowds beloved Slovak goalie from the 2015 World Junior Championships Denis “oh my Godla” seems as a promising future follow up in this “goof guy goalie” line. 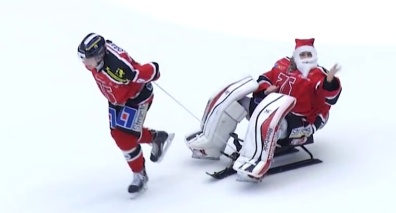 One of the many examples of a #HudaShow

The last example to support my claim about the Slovak goalies comes from Scandinavia. Though the news from the Swedish hockey league don’t make it often to the Slovak media, it does now. All thanks to Július Hudáček of Örebro and his #HudaShow victory celebrations that became quite a viral hit, crowning Hudáček king of hockey showmanship. After every Örebro victory Hudáček comes to the rink and entertains the crowd by small skits: dancing, wearing funny clothes and imitating activities such as fishing, kayaking, cross-country skiing or Santa Claus on his sledge. The Swedish fans seem to love these skits, and also Slovaks at home feel kind of warm-hearted about their fun compatriot over in Sweden.

Of course none of this “good guy goalie” thoughts of mine are, as far as I know, scientifically proven or anything. There is no proof of that goalies tend to be more likeable among the public than other players, moreover, it’s a pure nationalist ignorance that made me list examples only from the Slovak context. Nevertheless it all got me thinking, if it were the same if a defenseman or a forward took on this “nice guy” role – and if they could make it into a stereotyped pattern of “good guys”. As many other aspects of this sport, playing positions definitely have a strong symbolic charge. So what is the symbolic character of a goalie? A clumsy joker or a brave guard of the sacred goal?