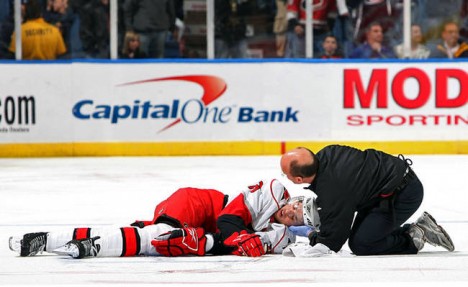 Both the NFL and NHL are responding to concerns about concussions. How are they doing this? Not with science. Not with rule changes.  Not with a culture shift.  But with more eyes…in the stands. I can’t even wrap my head around how (1) this suggestion even came up and, (2) who said “Sure! The fans will buy that.”

Concussion science, at this point, is more of an art than it is a science. And, while the science grows every day surrounding this issue, concussions aren’t like broken noses – there is no definitive visual diagnosis.  Yet, the NHL thinks that we, the fans and players, can be duped into believing that the League cares about player safety with this laughable effort.  According to deputy commissioner, Bill Daly, the addition of concussion spotters “is to help the trainer and help other club medical personnel who might not see a given play or really see the results of a given play and really just give them a heads up at what happened.”  The spotters in the NFL will have the ability to pull a player from a game if he appears concussed, whereas the spotters in the NHL will not have such power.  The spotters will also be hired by each individual team, rather than by the League, which is what the NFL is doing.  The spotters in the NFL have to be medically trained.  The spotters in the NHL will be, wait for it, “expected to study written materials and take NHL-mandated online seminars.” How badly do you want to see one of those online seminars? I imagine it looks something like this:

With a voice over that says “If you see a player on the ice that appears unbalanced or uncoordinated radio the team physicians immediately.”

Supposedly, the spotters aren’t supposed to be diagnosing anything, “All they are doing is alerting team medical staff where they witness or identify an incident where there is a visible sign of a concussion.” If only a team were made up of more than one person. If only a team were made up of multiple players and coaches who were also watching the game and, hopefully, invested in a player’s health.  If only, there were a bajillion television cameras placed at various angles watching the moves of every player so that we could know when there are so-called visible signs of a concussion.

Now make no mistake, I am not applauding the NFL for doing a better job with player safety than the NHL. I am, however, applauding the NFL for creating a better illusion of caring about player safety. The lack of action from both leagues is frustrating and embarrassing.  Players are starting to pull themselves out of the game of football for fear of their own safety (e.g. Chris Borland, Adrian Coxson), and that, unfortunately, is the only real way to protect oneself at this point in time. Of course, risks are involved in everything we do but some are measured and others are reckless. Players should not have to choose between their career and their health when they work in the entertainment industry. That’s right, I said it – they are entertainers. If we can find a way to make a helmet that will prevent concussions then I am all for it, but we’re not there yet.  All of the other measures and tests that are being worked on do not prevent concussions, they will simply tell us that player X already has a concussion. In my opinion, the point of diagnosis is too late.

We don’t need more eyes, we need more action.  The leagues act as if it is out of their hands or that any rule changes would change the game forever. But they change the game all the time. Where did this 3-on-3 overtime idea come from? When they introduced the gimmick of the shoot out that was a significant alteration to the game that came from a board room.  These decisions to make the game more “fan friendly” or “marketable” come every season but you know what else makes the game more “fan friendly”? Measures that will reduce the likelihood of someone’s favourite player being carted off in a stretcher. Shame on the NHL and NFL for thinking that the fans and players will be appeased by the addition of “concussion spotters”.  Shame on the leagues for treating the health of its players as expendable.  Shame on us for fostering and perpetuating a culture where violence enacted on the bodies of men and boys is seen as acceptable, especially when one has paid to see such harm occur.  Vice Sports calls the concussions spotters a PR ploy by both leagues, but I say to Commissioner Bettman that this move is an insult to my intelligence and my value as a fan.

2 thoughts on “How to spot a concussion? With your eyes, apparently.”