*Cross posted on The Rabbit Hole*

Last week was the first ever NHL Green Week. It was created in an attempt to showcase the League’s “greening programs and initiatives that are reducing the League’s environmental impact, while calling on fans and partners to accelerate a movement towards a healthier planet.” According to the US Environmental Protection Agency Green Power Partnership, “the NHL is the 20th largest user of green power in the U.S., and the only sports league to appear on the Top 100 list.” As part of Green Week, the NHL posted tips such as this one about water consumption:

Be a Leader on the Ice and at Home: The average American uses approximately 2,000 gallons of water per day – twice the global average. It takes about 12,000-15,000 gallons of water to make an ice sheet, which means you could make about 50 ice sheets from the water you use each year.  Water is a critical natural resource, but water scarcity is a growing concern throughout the world where thousands of miles of over-tapped rivers are drying up. The United States Government Accountability Office found that officials in 40 states expect water shortages to occur in some parts of their states within the next decade.

They go on to explain how the League is trying to reduce water consumption in their own activities and how it is partnering with other organizations to help restore freshwater in rivers and streams.

Tip number 3 for the week concentrated on food waste:

Americans throw out the equivalent of $165 billion each year by wasting 40 percent (35 million tons) of the food they buy…About 95 percent of the food thrown away ends up in landfills or combustion facilities. A byproduct of food once it’s broken town in those locations is methane, a potent greenhouse gas which contributes to climate change.

Jonathan Toews and Andrew Ference also chimed in with their personal interests regarding climate change. Toews claims that his interest in climate issues more broadly stem from learning more about where his food comes from. Andrew Ference continued by making the “small changes” argument:

“I mean, I eat burgers. I drive a big truck, but I also try to eat vegetarian when I can, and I ride my bike as much as I can. It’s not a chore to ride my bike, I enjoy it, even when it’s minus 20 outside,” he said. “It can scare some people, but a collection of little changes that don’t have to necessarily disrupt your life can have an also have an [sic] impact. It’s important to remember that.”

Furthermore, Mike Richter used the platform to discuss his role as the co-founder of Healthy Planet Partners (HPP), a “company that retrofits commercial buildings with clean energy technologies to minimize energy consumption and environmental impact.”

The League is quickly making a name for itself as one of the greenest professional sports leagues. It’s all good. It’s also far from being anywhere close to good enough.

The notion that “little changes” are sufficient to roll back global warming and environmental degradation are the metaphorical pain killers that we have been swallowing for decades now. They hide some of the symptoms and enable us to continue with our daily lives, but the underlying cause is simply being numbed. I disagree with Ference and think that we should be disrupted and scared. A lack of clean water, clean air, and people dying from drought, storms, and famine are scary things. Our lives should be disrupted by our own volition because soon we may not have that luxury. Sound a little too doomsday? Let’s just say I’m hedging my bets.

The NHL is not the only institution pushing this pain killer rhetoric.  Almost every nation that was present at COP21 (international climate negotiations) in Paris is doing the same thing, the NHL is just following their lead.  If nations stick to what they voluntarily agreed to do to cut emissions in Paris, the United Nations contends that our planet is still on pace for global warming of anywhere from 2.7-3.5 degrees Celsius (others report as high as 4 degrees), even though the global agreement was for 1.5 degrees. For Canada specifically, newly elected Vanity Fair cover boy/Prime Minister, Justin Trudeau pushed to limit warming to 1.5 degrees in Paris positioning Canada as a leader for the climate change movement. Then Trudeau came home and stated that we need to invest in further tar-sands development and pipelines in order to secure a future of clean technology. He said this knowing full well that in order to make an impact on global warming everything that is in the ground now must stay there. Trudeau is also promoting liquid natural gas (LNG) pipelines but his critics contend that he can “build LNG up, or bring down emission: he cannot do both.”

There is either a huge misunderstanding of cause and effect OR this is a facade of caring. In order to stop global warming it requires all of us, especially those who pride themselves on being the most developed (e.g. the hockey superpower countries), to drastically ramp down on consumption of everything including energy, food, transportation, and water just like the NHL’s Green Week tips advocate. Yet, we are faced with economies and societies that value growth when reduction is what is required.

Case in point: the NHL wants to expand. It wants more teams, more fans, more travel, and more jersey sales.  One of those teams is proposed for Las Vegas. A hockey team in hot and dry Las Vegas is not what Mother Nature ordered.  Still, at the same time the League is trying to tell us that we need to use less water, make less garbage, use less energy – less of everything. I hope you can see how all of these initiatives may be well intended but are also contradicted by the League’s intent to stamp its carbon footprint even deeper into the ground.  What happened to “accelerate a movement towards a healthier planet”?

In addition, the NHL just announced the outdoor games for the 2016-2017 season.  Four games, which according to the NHL’s own math, means an additional 48,000-60,000 gallons of water to make those ice sheets that will be used for one game each.  Seems a bit excessive doesn’t it?  Green sounds good but let’s call a spade a spade – it’s not the type of “green” that speaks the loudest.

But growth, even “green growth”, is precisely the problem. We live on a finite planet with finite resources which we are already exploiting to the limit and beyond. The aim must be to achieve a steady-state economy, with resources fairly shared, but that is incompatible with capitalism’s growth imperative.

I recently attended a public lecture with journalist and author Naomi Klein speaking very specifically about the incongruence of what was said at COP21 and what the actual plans are.  She explained that “a step in the right direction” is not what is needed to get us over the chasm that is climate change.  It is not a linear progression from this point forward; we are too late for small steps.  What we require now is a leap in order to stop the damage done. This is part of the reason why Naomi Klein’s team has named her movement the Leap Manifesto.

To put it visually, what the NHL and almost everyone else are proposing is this: 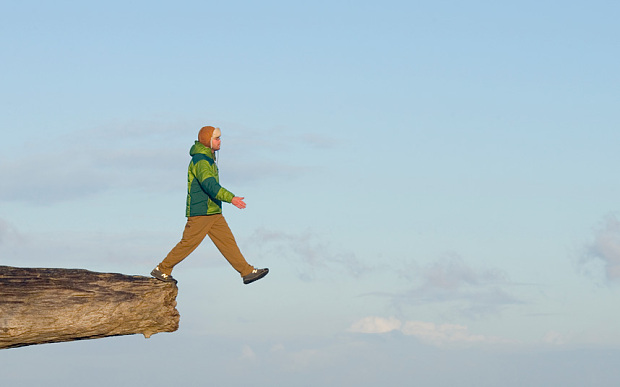 Photo from The Telegraph.

When what we need is this: 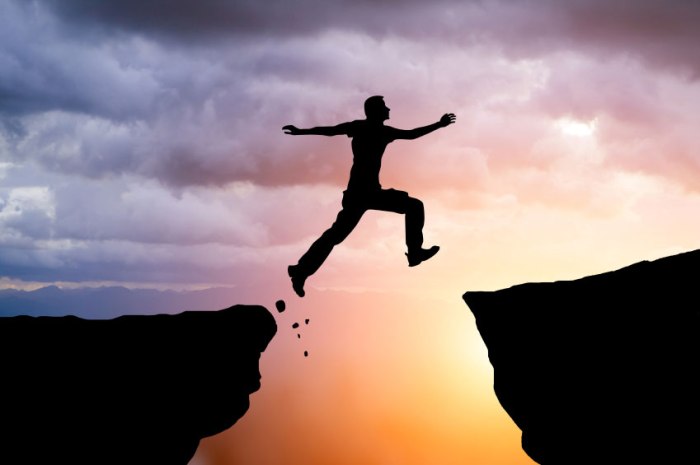 We need more than a “step in the right direction.”  Do you know why elite athletes of all kinds have taken to plyometric training (also known as jump training)?  Because plyometrics are functional and can, under the correct training regimen, create marked changes in athletic performance. It is described as a “quick and powerful movement.”  Consequently, hockey players do box jumps instead of just walking around a track in order to train. This is not to say that walking doesn’t have it’s place but it’s not what drives major changes in performance. Players need efficient and meaningful results, and so do we.  We need a quick and powerful movement. Our way of life has lead us to the precipice one step and a time meaning that we need a change of plans.

As you can see from the images above the direction of movement is not the problem, the method of getting from Point A to Point B is the barrier.  So my ask here is for us as fans and consumers to encourage the League to make a drastic leap and/or jump by ramping down on consumption and, by extension, not expanding the League.  I wrote in my last post of 2015 that a true show of leadership would be the NHL reducing the number of games in the regular season (by four games). It is a (small, but) radical ask. However, the NHL can be the leader of, what is in my opinion, a bad plan, or they can actually lead a revolution; a revolution where we realize that unlimited expansion and consumption inherently conflict with environmental sustainability.