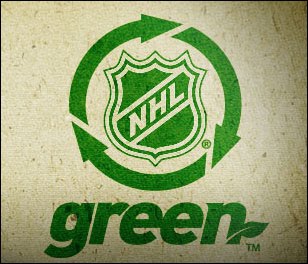 Sport is a consumptive activity.  Winter sports are even more consumptive.  The NHL seems to have figured this out and has taken on a myriad of green activities to off-set its environmental impact.  As someone who has spent a good amount of time researching corporate social responsibility initiatives the NHL Green program makes my head spin!  The NHL’s other community initiatives (e.g. Hockey is for Everyone, Hockey Fights Cancer and Let’s Move) all seem rather straight forward, but click on the NHL Green link and you are instantly bombarded with information.  We’re talking counterbalancing of carbon emissions, saving fresh water, Earth Hour commitments, and filling food banks.  Since sustainable development is Millennium Development Goal #7, I question if the NHL is quickly becoming a leader in this challenge or is it merely greenwashing?

I will preface this discussion with the fact that I am not an environmentalist.  Thus, the purpose of this post is really to highlight some of the work being done by the NHL and then you environmentalists out there can chime in as to whether these are meaningful endeavours or not.  As I mentioned there are really too many NHL Green initiatives on the go to discuss them all, which sort of makes me think that they might be casting a very wide, but  shallow, net; however, there are two initiatives that struck me as rather intriguing.

#1 Restore Hockey: The NHL has partnered with an organization called Restore Hockey, which calls itself the “Salvation Army of Hockey”.  Restore Hockey collects used equipment and facilitates equipment swaps across the United States.  They do not sell equipment.  They collect, clean, “refurbish, sanitize, repair and restore it before donating it back to children, families and organizations who are in need.”  As a registered charity, Restore Hockey also collects financial donations and will purchase starter sets of equipment for children.  Seems like a pretty sensible partnership seeing as how hockey equipment definitely contributes to our landfills but the question I would like to ask is what are NHL players doing to minimize their equipment waste? Everyone can make a difference, I agree but I would argue that high performance hockey teams probably create more waste in a week than a junior house team would in a year. I would love to see research on how many broken composite sticks are thrown away every season.  Elite athletes are the hardest on their equipment and therefore also have to replace their equipment more often. Every year CCM, Bauer, Warrior and everyone else comes out with a new line of equipment and the pros, whether they are actually using the new stuff or not, have to look like they are using the new equipment. What happens to all the old stuff?  It’s great to make sure that a youngster who can’t afford equipment receives the opportunity to play but as long as capitalism necessitates consumption, is restoring old equipment good enough or is it window-dressing?

#2 Gallons for Goals: This initiative focuses on the relationship between hockey and water.  The NHL partnered with the Natural Resources Defence Council (NRDC) for a “season-long commitment focusing on the issue of freshwater scarcity.  The NHL Foundation pledged to restore 1,000 gallons of water to a critically dewatered river for every goal scored during the 2011-12 regular season…”  The final goal count was 6,726, which will benefit the replenishment of Oregon’s Deschutes River.  The NRDC also put out a PSA titled “Hockey Depends on Water” explaining that

The frozen pond is the spiritual birthplace of hockey.  For years, NHL stars have learned to skate and play outdoors.  The League and the NRDC are committed to preserving these natural rinks for future generations.

The NHL has chosen a very politically salient issue by partnering for the protection of water.  Access to clean water, or lack thereof, is touted as a potential precusor to war given that it is a finite resource and commodity.  Some researchers have already linked the environment, water and hockey together arguing that global warming has already shortened the outdoor skating season:

The skating season generally isn’t starting that much later than it did 55 years ago – but it is ending earlier.  In some cases, as much as 15 days earlier.

The NRDC has used a very nostalgic and idealistic image of hockey, supposedly at its purest, in order to draw attention to its cause.  I only wonder how much water we consume for our indoor rinks.  One out of every five people in the world does not have access to clean drinking water, yet we use it to for recreation.  We consume water during play.  We spray it on our faces and some of us (you know who you are) spit out clean drinking water onto the ice during play. Then we use it to cleanse ourselves after we play. I find cognitive dissonance with the Gallons for Goals initiative because as much as the NHL and the NRDC tell us water is an important and vital resource (and I know that it is), we treat it with such disregard that I find the attempt a little disingenuous.

I see a lot of effort coming from the NHL Foundation, NHL operations and the venues themselves but I would like to know, as I mentioned earlier, what are the NHL players doing? It seems like a lot of money is directed towards balancing the NHL’s impacts but what about addressing the source – the players and their travel.