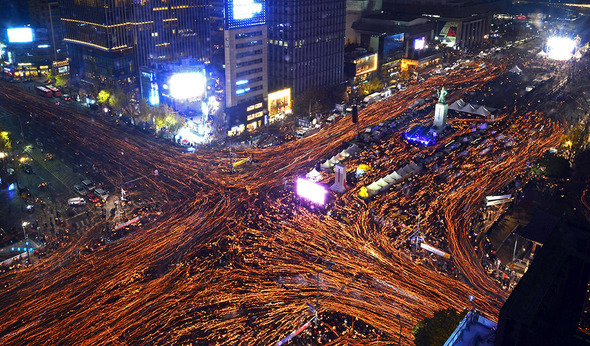 Candlelight rally in Korea (Photo from The Hankyoreh)

This article is revised from the paper: Park, D., Kristin E., B., (2016). Exploring the Racialized Athletic Identity of Korean Ice Hockey Players. Presented at the North American Society for the Sociology of Sport, Tampa, FL.

Which country is the most controversial across the world last few months? What do you think? My answer, without any hesitation, is South Korea. Sadly, there were enormous political corruptions between the presidency and Chaebol (a family-owned large cooperation in Korea, e.g., Samsung); as a result, Geun-Hye Park, a former president, was impeached and jailed for presidential power abuse. Since the corruption has been closely related to Korean sports system overall and the Pyeong-Chang Organizing Committee for the 2018 Olympic, Koreans are seriously afraid of whether 2018 Pyeong-Chang Winter Olympic Games can be held successfully.

In addition to the political climate change in South Korea, the NHL’s decision terrifies not only Korean hockey fans, but also fans who are eager to see the Olympic hockey. The NHL announced that players are not going to South Korea in 2018. Korean Olympic Committee (KOC) and Korean Ice Hockey Association (KIHA) are facing huge frustrations because Men’s ice hockey is well-known for the most profitable event in the Winter Olympic Games. Rene Fasel, a president of the International Ice Hockey Federation (IIHF), guaranteed a qualification of team Korea if the team makes 18th in the world ranking by 2017 without the Olympic qualification (In 2016, the IIHF approved auto-qualification to Korea as a hosting country).

To rapidly enhance a level of Korean hockey, team Korea has been recruiting White Caucasian athletes since 2013 (so far, seven players have obtained duo-nationalities between South Korea and Canada/US). In a sport history in Korea, seven imported players are the first case of athlete naturalization without Korean heritage; moreover, team Korea ice hockey has the most naturalized athlete in one discipline.

Canada feeds the sport of ice hockey with excellent Canadian hockey players. Maguire (1996) indicates that Canadian players contribute to enhancing a level of British hockey. Further, consider the case of Japanese hockey, where eight Japanese-Canadian players obtained Japanese citizenship to participate in the Olympic Games in 1998. Team Japan  performed well against France, Belarus, and Germany during the Olympic tournament in Nagano, 1998. Japanese scholars, on the flip side, criticized acquiring Canadian players only for the Olympics as a very short-sighted strategy because of the negative influence on the sustainable development of domestic athletes (Chiba, Ebihara, & Morino, 2001).

What other negative consequences arise from such situations? In addition to the sustainability of local hockey systems, internalized Whiteness is one that comes to mind. Whiteness is “a formation of racial order and construction of social identity that privileges and powers certain groups, not others” (Douglas, 2005). Ice hockey seems to be a racialized sport because it has been played mostly by White athletes (Allain, 2010), and players are raced (White), classed (middle-class), and gendered (men) (Robidoux, 2002). Therefore, in my research, I strove to understand the racialized athletic identity perception of the Korean ice hockey athletes, particularly the members of men’s Olympic team.

Korean hockey players have perceived White athletes as physically superior beings. The media can play a pivotal role in generating pervasive Whiteness, as media often frames White hockey players as big, powerful, and unbreakable bodies (Poniatowski & Whiteside, 2012). My research participants indicate that they see themselves as relatively mediocre athletes compared to Whites, just because of the physical differences. Although there is no clear scientific evidence, most of the Korean players mention about White players’ bones. They believe in that imported players have different bones, which are stronger than Korean players. While playing with imported players on team Korea, Korean players have internalized or naturalized, Whiteness. A participant says, “whenever I see any Whites on the street, sometimes I feel they should play hockey very well because they are Whites.” The disparate body size is the matter for Korean players.

So, how are Korean players trying to negotiate the Whiteness? The players indicate that they have perceived a glass ceiling. The KIHA has selected automatically White players, even when they were suffering from injuries. Furthermore, coaches guaranteed the naturalized players with sufficient ice time. In this manner, Korean players consider that they cannot compete with the naturalized players. Since Whiteness is pervasively institutionalized, the Korean players think that they cannot change the situation, apparently unfair competition, which they are facing as individuals. Consequently, the players have been competing against each other to be qualified for the Olympic team, not seven White players.

Road to the NHL Outdoor Classics (Photo from EPIX)

I think there is an impregnable White Habitus. The White Habitus is “a racialized, uninterrupted socialization process that creates white’s racial tastes, perceptions and their view on racial matters” (Bonilla-Silva, Goar, & Embrick, 2006). In the sport of ice hockey, the NHL consistently generates a globalized White habitus. The NHL facilitates a particular racial taste in hockey through media (e.g., The Road to the NHL Winter Classic on EPIX, or The Leaf: Blueprint). The framed media leads Korean players to internalize racialized athletic identity. Eventually, they gave up on themselves being able to compete against the White athletes in this context. Due to institutionalized Whiteness in Korea, the players have a racial bias against imported players. Bonilla-Silva (1997) articulates racialized social system in his study Rethinking Racism: Toward a Structural Interpretation. He states that “Once social formation is racialized; its normal dynamics always include a racial component.” Aforementioned, the KIHA’ practices are racialized against the Korean athletes. Thus, the Korean players are encountering institutionalized discrimination and White supremacy, even in their home country.

Hockey is everyone’s sport, not just a particular group of people’s. Korean players, however, see themselves as mediocre athletes and perceive Whites as physically superior because of the internalized Whiteness and institutional discrimination. This Whiteness is covertly constructed from institutional sources and overtly absorbed by organizational culture. The NHL is the biggest and most influential institutional source. The NHL is generating White Habitus (i.e., racialized body image, stereotypes of ice hockey). Consequently, Whiteness has been internalized in Korean players and institutionalized in the organization.

What do you think?

Allain, K. A. (2011). Kid Crosby or Golden Boy: Sidney Crosby, Canadian national identity, and the policing of hockey masculinity. International Review for the Sociology of Sport, 46(1), 3-22.

7 thoughts on ““Hockey is Not Your Stuff”: The Racialized Athletic Identity of Korean Ice Hockey Players”