A Maclean’s Magazine article by Aaron Hutchins asks “What can our big cities learn from Ste. Anne, Man.?” in regards to producing “a women’s hockey juggernaut, brought to you by small cities and towns”.  Of the 23 players on the national women’s team, none of them hail from any Canada’s five largest cities, which together account for 21% of the Canadian population. Instead, 17 are from hometowns of less than 250,000 people. The article is an ode to the virtues of smaller communities for athlete development, focusing on increased ice time, less structured play on outdoor rinks, and even being safer. While there is some truth to these arguments (but not the safety one, the opposite is actually true; though nowhere in Canada is as dangerous as people often imagine), this romanticization is quite misleading.

When people imagine hockey in small town hockey, they think this:

Kristi Allain writes, “Regardless of where hockey is actually played, mythologically, it is located in small-town Canada” (2015, p. 124). This image is marketed through Roger’s Hometown Hockey, which sets up a broadcast in the “town square” and Hockey Night in Canada’s Hockeyville, where communities compete to demonstrate their obsession with hockey to win a NHL pre-season game and arena upgrades. 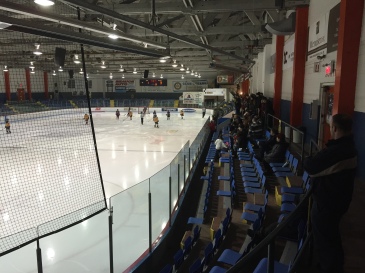 But in reality, the hometowns of Canadian Olympians are not enclaves of picturesque ponds and cottages, but highways, strip malls, and cul-de-sacs full of pick ups. Many of the towns highlighted in the Macleans’ article are in fact suburbs of the major urban cities. For example, while no player is from Toronto, four are from its suburbs of Kleinburg, Oakville, and Scarborough. St. Anne, which the big cities are supposed to learn from, is 40km from Winnipeg. Indeed, only three players are from towns both under 100,000 and more than an hour away from a major urban centre (the same pattern plays out on the roster of Canada’s 2016 men’s World Cup team). Player’s hometowns are more the suburban sprawl of the last half-century than romantic Canadiana.

Players are coming from the major population centres, just not their main city. If we need to see that changed and have national team players with Montreal, Toronto, or Vancouver listed as their hometown rather than Beaconsfield, Scarborough, or Aldergrove, we could instead ask critical questions as to why hockey participation is more of suburban than urban thing, such as examining the game’s expense and intimidating whiteness that has led to soccer and basketball overtaking hockey.  But instead the Maclean’s article once again reinforces the desire of Canadian hockey culture to believe in a nation where the “small” towns build the right character to create elite hockey players (and assumes that that is the peak of Canadian accomplishment), proof they are doing things right. In this myth, hockey will forever spring from our imagined ponds and there is no need to grapple with the questions about cost and access to what a 2013 Maclean’s article called “the real scandal in hockey“, the development programs that are actually producing the majority of contemporary elite hockey players.