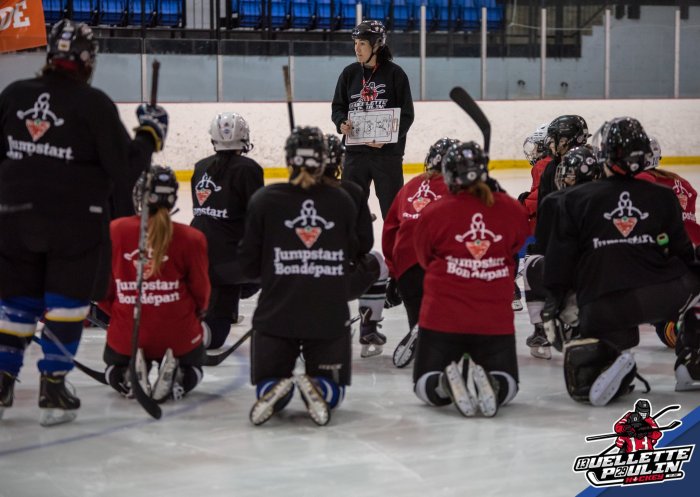 Taking a knee while Caro explains our next activity. Photo from Ouellette Poulin Hockey.

I was privileged enough to attend Caroline Ouellette and Marie-Philip Poulin’s adult hockey camp in Montreal, Quebec this past weekend. When registration came around this year I signed up IMMEDIATELY because (like many of you) all I want to do is play hockey all day, every day (even though my body seems to disagree with this sentiment). Therefore, this post is part free advertisement for an experience of a lifetime but also part thank you letter.

As a child, I wanted nothing more than to play ice hockey but both of my parents worked full-time with an hour long commute each way, which meant that no one was able to take me to 7am practices. When I was a growing up there weren’t a lot of opportunities for girls to play ice hockey. No one that I went to school with played girl’s hockey and a lot of that had to do with the fact that, at the time, girls played ringette, not hockey. Women’s hockey would not become an Olympic sport until I was 13. At the age of 21, with my tennis career winding down and the desire to play hockey still strong as ever, I realized that I had enough money to pay for hockey and a car that could get me to and from the rink. For the last 13 years, I have been playing recreational women’s hockey in Vancouver, Canada with other women who also picked up the game as adults. We all lead full lives away from the rink but also want to be the best hockey players we can be. Playing catch up as an adult is not an easy task and the reality is that the opportunities to improve as an adult are few and far in between. Over the last few years, I have contacted skating coaches in the Vancouver area inquiring about small group lessons for me and my teammates but none of them replied to my requests. When every flyer you pass is for a kids camp and skating coaches don’t answer your emails, it becomes very clear as an adult (woman) hockey player that you do not exist in the larger hockey imagination. Or, at the very least, you are far from a priority.

Enter Olympic hockey (s)heroes, Caroline Ouellette and Marie-Philip Poulin, who have taken the time and initiative to create a space for adult hockey players to hone their skills and fuel their passion, where few others have recognized the value.

I participated in the camp with 8 teammates/friends. The general structure of the 2-day camp included 3 hours of ice time, 1 hour of off-ice training, and 1 hour of classroom time each day. Some of the coaches for the Montreal camp included: 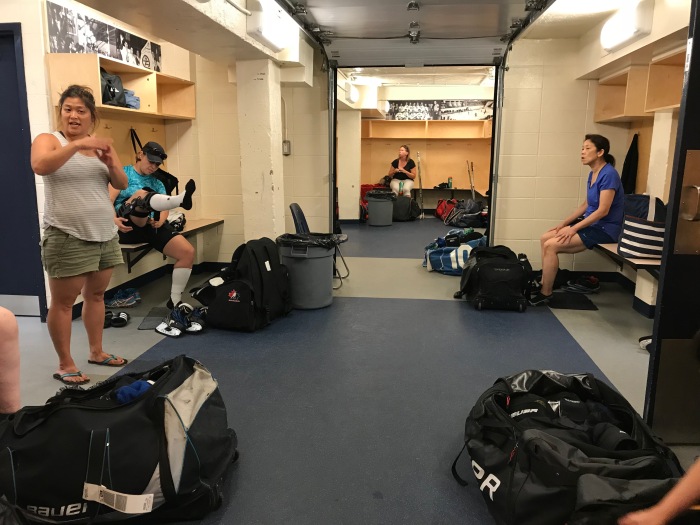 The calm before the storm…

These women run a spectacular hockey camp. Full stop. It surpassed every single expectation I had. This is not my opinion as a fan, or player — I’m saying this as a former coach. Now when I say coach, I mean tennis coach but the fundamentals of (good) coaching are the same regardless of the sport. There were approximately 60 camp participants (overwhelmingly women but it is a co-ed camp) split into two groups with alternating ice times. The ages of participants ranged from young women, to men and women in their 60s, and it was a good mix of beginner and intermediate players. 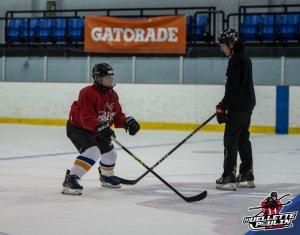 My buddy Wendy getting some attention from Caro. Photo from Ouellette Poulin Hockey.

I was a little worried about how they would handle 25-30 adults on the ice at the same time but their use of space and time was phenomenal. We rotated between stations (e.g., shooting, stick handling, games) and the timing was perfect. Just when things were getting too repetitive or you were getting tired, it would be time to change stations. We played small space games that fostered creativity, spontaneity, and were just plain fun. Every coach at one time or another would stop a drill or activity and re-group when participants weren’t doing things quite right. It is very easy for a coach to go through the motions once a drill is set up and just wait out the rotation, especially since we were all recreational athletes. But every single coach was engaged in the drill and with the participants. Caroline Ouellette called us out for using our backhands too much (#Truth), Julie Chu stopped us to make sure we picked our spots on net when coming out of the corner, and Ann-Sophie Bettez made a player go back and get the “correct” puck and not just any puck. Perhaps most importantly, every coach treated us as if we were worth their time and attention. We all kind of wondered going into the camp what it would be like to be on the ice with women of their athletic caliber but this was the most down-to-earth, charismatic, and warm group of athletes you could ever meet. 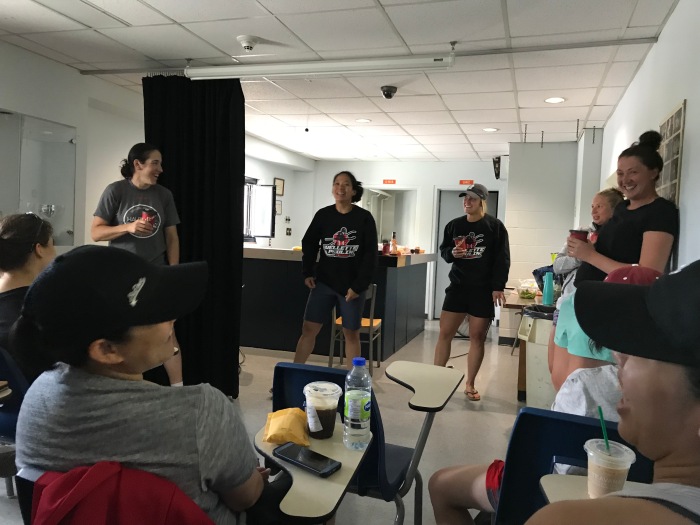 Our off-ice sessions were geared towards the recreational demographic with concentrations on mobility, flexibility, general strength and agility. Julie Chu ran our off-ice training session on Day 1 and Caroline Ouellette ran it on Day 2.  On the second day, the coaches hosted a little Q&A where they talked about their journey through hockey and what inspires them. Bettez and Deschênes touched on how they balance full-time jobs with their CWHL careers. Most reflected on having to play on boy’s teams growing up because of the lack of opportunities to excel in girl’s hockey. We have come a long way in Canada but girl’s and women’s hockey still has a long way to go. Case in point, I recently moved to Kingston, Ontario and I put myself on the waitlist for the upcoming season of women’s rec hockey in April of this year. A couple of weeks ago, I received this heartbreaking and disappointing email: 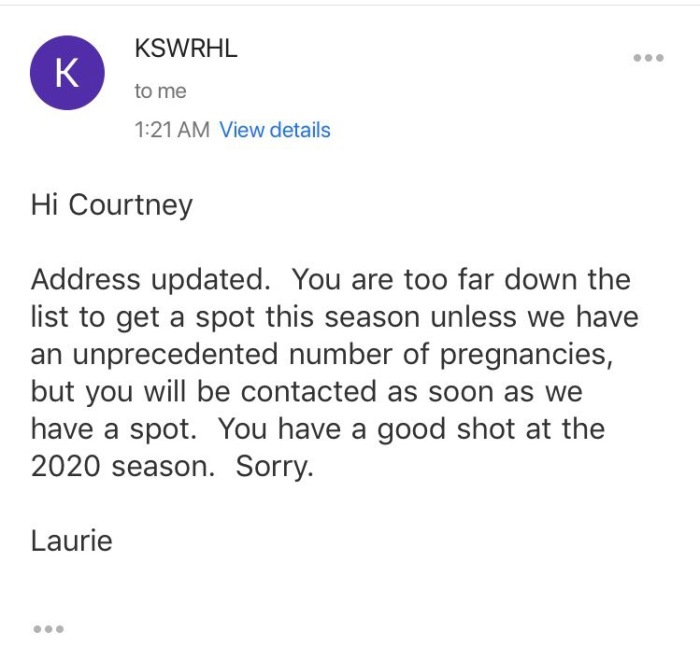 This was another reason why this camp was even more special for me because I knew it would be awhile before I would be on the ice in a woman-friendly environment. I now live in the hometown of Don Cherry and Jayna Hefford; yet, I have been unable to find any adult power skating lessons and I need “an unprecedented number of” women to get pregnant before I can play organized hockey. But I digress.

[Update: I did manage to get a last minute spot on a team in Kingston, so huzzah to fertile women!]

My teammates and I left camp invigorated and inspired (and maybe, just a little sore). We were also devastated that it was over. One of the best parts about the camp was seeing how much fun all my friends and teammates were having. But my favourite memory from the camp was when Poulin was demonstrating a fundamental skating technique and face planted in front of everyone (Sorry Pou 😂). It was my favourite memory not because the error made her more relatable, but because she couldn’t stop laughing at herself — like doubled over laughing. We have become accustomed to robotic and aloof NHL stars, making these women a breath of fresh air. Don’t even get me started about how adorable it was to watch Julie and Caroline with their infant daughter, Liv, hanging around the rink.

All of this is to say, there are a large group of women (and men) in Canada and the United States who never had the opportunity to play hockey as a child but are very much a part of the hockey community. We have the money and time to invest in getting better; yet, for some reason we are not really part of the overall growth strategy. Obviously, kids should have as many opportunities to try sports and excel as possible, but we need to expand our understanding of “growing the game” because participant growth is not exclusive to youth. Furthermore, the goal of sport participation and coaching should not be to create high performance athletes because it’s not realistic. It should be about health, wellness, socialization, and fostering confidence in one’s body. The Ouellette Poulin adult hockey camp hit every one of these points. If you are one of those rec players who would rather lose a limb than miss a hockey game (or would rather miss your kid’s recital than miss a game – you know who you are) then save some vacation time in your 2019 calendar for this bucket list camp. You will not be disappointed.

On behalf of myself, the Vancouver contingent, and I’m sure many (if not all) of the other participants, this is a big merci beaucoup to Caroline and Marie-Philip and their coaching team for an unforgettable experience. Thank you for recognizing the passion and dedication that exists among us mediocre adults. Thank you for making us feel like we mattered. Those fist bumps meant more to us than you will ever know. 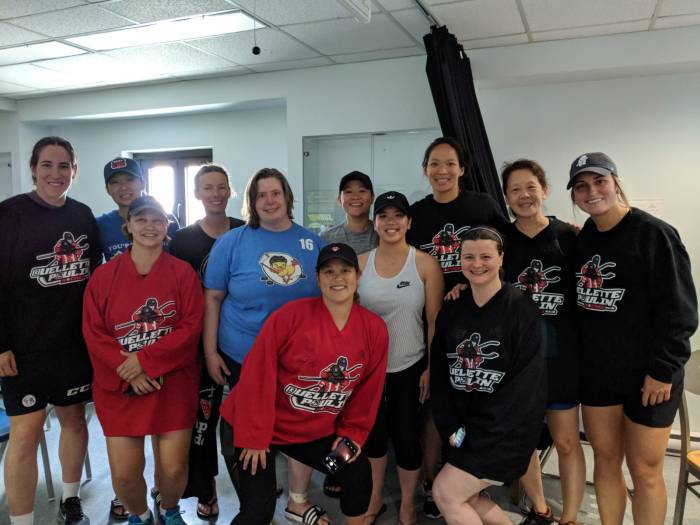 The Vancouver contingent with Caroline Ouellette, Julie Chu, and Marie-Philip-Poulin. 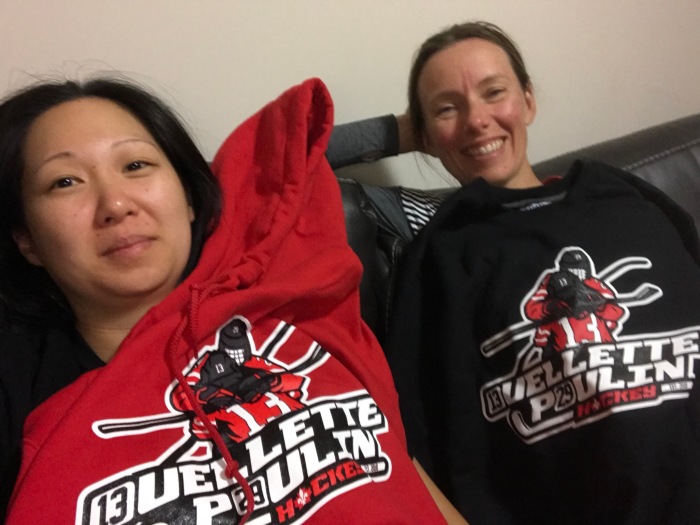 Reminiscing about camp in our new swag.

To learn more about all of the camps offered check out: https://1329hockey.com

To see more photos from the Ouellette Poulin hockey camps, check out their Facebook page.

And don’t forget to support Les Canadiennes and the CWHL

5 thoughts on “Caroline Ouellette, Marie-Philip Poulin, and the Forgotten Generation(s)”