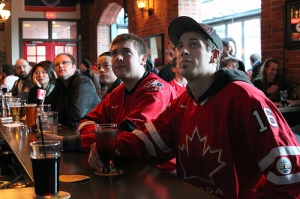 I figured as a hockey blogger who agreed with all of the naysayers when the announcement about While the Men Watch came out that I owed it to the ladies to at least watch some of their show to give them the benefit of the doubt.  Well, I did and I could only take one period.  I’m not sure how many of you watched the live stream of While the Mean Watch during Game 1 of the Stanley Cup Finals but it was one of the most painful experiences of my life.  It is one period of hockey that I will never get back and I think that I should be able to sue the CBC for those minutes of my life back.

Their stream was filmed in a studio at CBC headquarters with a traditionally feminine set that would make more sense for The View than for a sports commentary, alternative or otherwise.  The ladies, Jules Mancuso and Lena Sutherland, introduced Sunny their CBC producer and Jamie Ordolis, Senior Producer of CBC Live. The entire webcast centered around dialogue between these four, and of course tweets from the Twitterverse.  Right off the bat we had Sunny, the only man on the webcast, explaining to Mancuso and Sutherland basics of the game (e.g. the playoff record of the LA Kings).  Sunny was their go-to-guy for anything actually related to the game: players, stats, facts, and explanations.

After the anthem one of the women commented “Martin Brodeur looks like he’s getting into a straddle position” in reference to his pre-game stretches.  Then they said that “Brodeur is looking like a rooster with the red and the chest puffed out. He is a good looking man, once you take off all of that transformer gear…he’s quite a dashing man. I’m partial to the older ones.”  Really CBC? This is what you call alternative commentary? I would call it mindless drivel, but wait it gets better, er, worse.

Then we get into the real meat of their commentary concerning the roster.  They explain that, to both ladies and gentlemen, a printable roster can be found on CBC’s website and that the roster is important not because we “care about their scoring stats. We want to know about their height, weight, where they are from…”  The roster becomes extremely important because it will be used to determine THE BOYFRIEND OF THE GAME.  This is where the blood started dripping from my ears.

Boyfriend of the Game: Zach Parise. Photo from Sportressofblogitude

The Boyfriend of the Game (BFOTG) is what makes the hockey game more bearable for women, and I would assume gay men, to watch.  This leads us into The Pair and the Spare.  The Pair is your #1 choice for BFOTG, but you also need a backup and a spare for your backup.  For today’s game Zach Parise was the lucky fella who received the BFOTG title, David Clarkson was selected as the backup (although was almost dumped quickly afterwards when they thought he was missing a tooth), and Adam Henrique came in as the spare.  Sutherland (I think, not quite sure which one is which but it’s not like it really matters) then explained that Parise is a little shorter than what she prefers for BFOTG but that his 5″11 and 195 lb. frame are still “doable, well straddleable.”  Awesome.  Sunny also explained to the women that LA has never won a Stanley Cup to which one of them replied, “Wouldn’t you say they are the virgins of the playoffs?” The other stated, “If they win, LA will  be laid. Twitter #popthatcherry”.

When Fraser scored the first goal of the game Mancuso and Sutherland acknowledged the goal and then went right back to their teenage high school dialogue of “Would you rather…?”  The question for the first period was would you rather take a hall pass (an allowable infidelity) with your BFOTG it if meant that you would have to abstain from sex with your man for three months?  Sutherland’s reply, “This is a thinker eh!”  I think we need to redefine what thinking is if this “would you rather” is considered a thinker.  There were some other tidbits of “alternative commentary” genius such as “what do you call it when they miss?” To which Sunny replied, “it’s just a miss”, but I think you get the idea.

Forget the fact that these women play to every negative stereotype about women and sports. Forget the fact that they turn to the only man on their set to learn about hockey.  Forget that they clearly are playing dumb in order to meet their mandate.  The problem with While the Men Watch is not Sutherland and Mancuso. The problem is that so little positive attention is directed at women in and around sports that when an opportunity to provide an alternative commentary on the Stanley Cup Playoffs arises said opportunity did NOT go to women who can speak intelligently about the sport; rather, the opportunity went to two women who don’t actually enjoy the game and have to find ways to make the sport more bearable to sit through.  If women received equitable representation on SportsCenter, in the sports pages, and in sports blogs then go ahead, give them their 15 minutes; but we don’t. So those few opportunities to enter the masculine arena of sports, especially when provided by a national institution such as CBC, should go towards creating acceptance for women talking about sports, not reaffirm negative stereotypes.

I’m sorry but While the Men Watch is not an alternative commentary. There would have to be game commentary in order for it to be called commentary.  It is however heteronormative, sexist, and sex-filled banter that diminishes the game of hockey, attempts to objectify men, and is a horrible example of Third-Wave feminism** (and no, objectifying men is not called equality). I get that plenty of women like to talk about how hot Lundquist is. Just like how many, many, many men only watched tennis because Anna Kournikova was playing.  Heck, my own mother comments about how “cute” Alain Vigneault is whenever they show him on screen, but at least she knows what the crease is.  Now, I’m not saying that women must demonstrate a certain level of hockey knowledge before they can be accepted into the inner circle, which is generally how it works; but this “show” does not make non-hockey fans into hockey fans.  You don’t learn anything about the game! You learn about which players are “doable” but I really don’t think you need a national platform to do that.  CBC could have used these women to teach non-fans about the great sport of hockey in a non-intimidating playful way; but no, they decided to pander to the cornerstone of marketing – sex.

Suffice it to say I will take Jim Hughson calling the game any day.  I would even rather watch Don Cherry in his loudest suit rant about left-wing pinkos and pukes, but I will not be watching While the Men Watch ever again. There are many important hockey issues that deserve a CBC webcast forum but the LA Kings popping it’s Stanley Cup cherry is not one of them.  While the men…and women and children watched the CBC telecast of Game 1, I got a headache.

If you would like to watch the opening skit that Mancuso and Sutherland wrote as a way of firing back at their haters watch below.  Please note that although the skit was written as joke, the discussion is extremely close to their actual “commentary”.

*The quotes included in this post are not verbatim, but are pretty close. I was typing while they were talking so I tried my best.

**Third-Wave Feminism (AKA Girl Power) is premised upon neoliberal ideas of success and empowerment. It largely believes that “feminism” is no longer needed because gender equality has been achieved by some. Furthermore Third-Wave feminists celebrate sexuality in a manner that appears empowered but still largely exists within hegemonic male domains.

14 thoughts on ““While the Men Watch” gave me a headache”