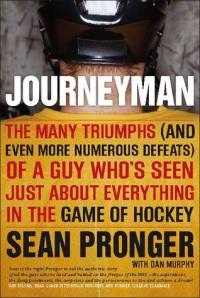 Honest. That is about the best way I can sum up Journeyman: The many triumphs (and even more numerous defeats) of a guy who’s seen just about everything in the game of hockey.  I loved reading this book! If you have ever dreamt about playing in the NHL with the best of the best this is a phenomenal way to live vicariously (if not successfully) through Pronger’s experience.   I have read quite a few sports biographies but this book evoked a different set of emotions as compared to something like Andre Agassi’s Open (which was my previous favourite auto-bio) or Ken Dryden’s The Game.  It’s different reading about championships and triumphs than it is reading about the pure desire to compete with the best, and that is what Journeyman is about – the process, not the outcome.

The first thing you’ll notice is that Pronger has a wicked sense of self-deprecating humour, which makes for an easy read.  You also learn a million and one ways to refer to beer. He takes you on his highs and lows and he would probably be the first to tell you that the highs aren’t all that high.  From living in a farmhouse playing in the East Coast Hockey League (ECHL) to scoring one-timers with the Blue Jackets it is a sincere account of what it is like for two-way players.  There is no sugar-coating about what it is like to fight for a spot in the NHL but throughout it all there is an underlying respect and love for the game that drips from the pages.  I think every young player who has the dream of playing in the NHL should read this book because Journeyman represents the other side of the coin.  Behind all the glamour that is the ‘fastest game on earth’ lies truths that, unless you have done it yourself, are hard to fathom.  I had an idea of what it might be like for a journeyman but I was humbled through my reading.

One of the journeyman realities that really struck me was the hierarchy of players on the same team.  Pronger explains that as a journeyman you stay on the ice after the ‘regulars’ are done practice to put in your extra dues.  This we probably all know, but he then explains that in the Never Hungry League (NHL) regular roster players get whatever food they want.  Chicken, steak, fish, desserts, it’s all there for your consumption.  As for those without job security they get the leftovers, which on any given day could consist of the lettuce that garnished the chicken and steaks and a few grapes.  Is Pronger exaggerating? It’s possible, but knowing how much hockey players eat it’s probably pretty accurate.  Maybe it’s because, personally, I never miss one of my 4 or 5 square meals a day but I thought that was outrageous for players on the same team to have such diverse experiences…with something as simple as food!  We’re not talking about press commitments or sponsorships.  We’re talking about chicken, and if you are a healthy scratch for that night it means you won’t play and might not even get fed. Journeymen very much represent the margins of the game.

Besides the diversity of nourishment received down the lineup what I really pulled from this book was the notion of players as commodities.  Pronger does a fantastic job highlighting the ownership of a player from the moment he is drafted.  At one point Pronger’s contract was traded from the Bruins to the Islanders and he didn’t even know about it.  Pronger was in the AHL still receiving pay from the Bruins until one day he opened his paycheque and it had the Islander’s logo on it. He phoned his agent to find out what was up and even his agent wasn’t aware of the trade.  The Bruins dumped his contract because they had too many players on the roster and never felt it prudent to inform him of the situation.  These players sacrifice so much for the team, yet to the team each player doesn’t mean much more than numbers.  That being said, Pronger’s trade from Columbus to the Manitoba Moose seemed to be one of the more human NHL transactions where the wellbeing of the player was front and centre but even then it only happened because a favourable economic transaction could be made to facilitate Pronger’s request.

Pronger also does a great job of elucidating what is wrong with the myth of dedication and hard work as being sufficient to making the pros.  From what I can tell Sean Pronger did everything in his power to become a regular in the NHL but he explains throughout the book one’s NHL fate is rarely up to them.  Telling his story about Blue Jackets training camp and the difference of what it’s like for a grizzled veteran and a draft pick Pronger writes:

I’m sure that for an eighteen-year-old kid just out of junior, going from playing against boys to suiting up against grown men, life at camp may seem hard.  But I’m here to tell you it’s not.  Most have a mid- to high-six-figure signing bonus burning a hole in their pocket.  Most are going to get the benefit of the doubt at camp, play in almost all of the pre-season games, and have every opportunity to make the team.  Sure, they sweat.  Sure, they may have to read uncharitable things written about them in the papers.  Sure, they may have butterflies in their guts when they hit the ice.  But what they don’t see are all the doors management is quietly keeping open for them behind the scenes.

You see, the thinkers who draft these guys are the same people who decide whether they make the team.  They want them to succeed.  General managers want to prove that they picked the right guy.  How could a GM possibly be objective in training camp about a kid he picked a couple of months ago at the draft?…And the moment he picked him, he staked his own reputation, with the fans and with his own boss, on the promise that the kid can deliver.  So you can bed he’s going to give the kid every opportunity to deliver. (p.205-206)

And there it is, what every sociologist has been arguing since the dawn of time (or whenever), coming from the mouth (or pen) of someone imbedded within the institution – all the doors management is quietly keeping open for them behind the scenes.  Thus, despite hard work and dedication being important parts of the puzzle we must also acknowledge those who hand out the opportunities.  As Pronger points out these are not objective decisions, rather they are decisions made within constraints.  The same constraints that can play in the favour of this year’s draft pick are the same constraints that can make someone like Keith Ballard a healthy scratch.  It is the difference between someone wanting you to succeed and is willing to do everything to help you versus someone trying everything possible to make life difficult for you.  Sure, some people come out of those corners swinging and become the Venus and Serena Williams’ of the world but we have to acknowledge who is doling out first and second chances and to which people.  Kudos to Pronger for naming those actors.

The book also discusses how being a journeyman affects his family, his recounting of the Bertuzzi-Moore incident, and his ‘friendship’ with The Great One.  Frankly, what I have written here doesn’t really do the book justice.  You can certainly approach this book as a light read about hockey but I think that would be a mistake. I think Pronger does a wonderful job giving life to the theories of political economy and exposing all of the deeper dimensions that exist within hockey and sport as a whole.   It is what many in academia strive to achieve – the ability to translate knowledge for public consumption.  It is free of academic jargon yet rife with critical reflection. Well done Sean. Well done ;)