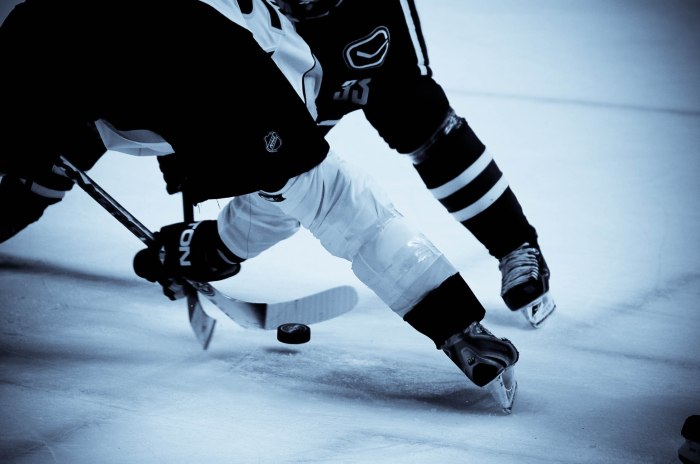 Despite the fact that this blog is a site for critical reflection on the sport of hockey, every now and again it’s nice to raise the hammer and appreciate what is great about the sport.  This is one of those opportunities.   Roland Barthes (1915-1980), the famed French literary theorist and philosopher, took part in a Canadian documentary film titled Le Sport et les homes.  He was asked by Hubert Aquin, a Quebecois writer and producer for the National Film Board, to do the commentary for the film. After many different versions of the title the one that stuck was one of Barthes’ suggestions, Qu’est-ce que le sport?  or What is sport?  For this project, Barthes was shown stock footage of certain sporting events (bullfighting in Spain, car racing in America, the Tour de France, hockey in Canada, soccer in England) and was asked for his reflections.  The finished product was shown on June 1, 1961 on the television network of Radio Canada.

Barthes has a lyrical way of writing.  It is not exactly the most accessible piece of writing but he makes some fascinating observations about hockey, which I have included in full below.  Here is what hockey looked like through the eyes (and mind) of Roland Barthes (emphasis added):

Of all sports-loving countries, Canada is one of the most often frozen, yet of all “pedestrian” sports ice hockey is the fastest: sport is this specific power to transform each thing into its opposite.  And it is in this renewed miracle that a whole country participates, by its crowds, its press, radio, television: behind the scenes, before the combat, however fierce, there is the physical relation of a country and its inhabitants.

What is a national sport? It is a sport that rises out of the substance of a nation, out of its soil and climate.  To play hockey is constantly to repeat that men have transformed motionless winter, the hard earth, and suspended life, and that precisely out of all this they have made a swift, vigorous, passionate sport.

The children seem to be fighting, but they are merely learning to inhabit their country, and what the mothers’ eyes follow in their progeny’s first adult gestures is not so much the outcome of a battle as the development of an initiation  This first law of the climate is entirely contained by the gesture that prepare the space of the combat: a little frozen water, and hockey is possible.

All that remains is to make this space into the object of a rule: of a strategy, of an idea.  In this rapid sport, thought can be only a reflex, and this reflex learned like any other.  All foreseeable maneuvers become the object of a lesson: to seize the puck in flight and then to conduct it through a thousand obstacles; in this fashion one learns to score a goal…and even to stop.

Here is everything that will occur in the game that now begins.  One rule dominates the game: that no player penetrate the opposing side ahead of the puck; whence the irresistible, liberating aspect of these great collective deployments.  It is as if the men were sucked up less by the opposing goal than by the malicious object that leads them to it.  The spectator’s choral manifestations punctuate the duration of the match.  By its massive exclamations the crowd comments on the spectacle.  Every moral value can be invested in the sport: endurance, self-possession, temerity, courage.  The great players are heroes, not stars.

A goal score is, as in all sports, a great victory, but in hockey the game is so fast, the puck so tiny, that a failed goal is not only a defeat, it is virtually a wound, intense as a pistol shot: for man’s failure is yet more intense in the face of the triumph of ineffable things than in the face of heavy things.

The goal is empty. Why?

Because hockey is a game of offensives, in which the pleasure of attack justifies every risk.  Occasionally one team’s leader decides to pull the goalie in order to be entitled to increase his attack group by one combatant and thereby to bring the war without intermission into enemy lines.

By its very power, this sport sustains a permanent threat of illegality: the game constantly risks being faster than consciousness and overwhelming it.  There then occurs a kind of test of sport by the absurd: the sport scandal.  This scandal occurs when men collapse the slender barrier separating the two combats: that of sport, that of life.  Having lost all intermediary space, deprived of stake and rule alike, the players’ combat ceases to be subject to the distance without which there can be no human society: once again a game becomes a conflict.

Then sport returns to the immediate world of passions and aggressions, dragging with it the crowd, which came precisely to seek purification from it.  Sport is the entire trajectory separating a combat from a riot.

I highlighted the portions that resonated with me the most, but I would love to read your reaction to Barthes’ thoughts.  I think what Barthes does really well, and in a succinct  manner, is capture the entire myth of hockey that we have been taught to love: it’s relation to the Northern environment, the speed of the game, and the value of a goal.  In particular, his perspective on speed is interesting since he had been watching hockey of the 1950s, yet he labelled the “permanent threat of illegality” to a tee.  The fact that the “game constantly risks being faster than consciousness and overwhelming it” is largely why we have so many dangerous plays today. He saw the significance of speed well before we needed Brendan Shanahan as the NHL’s Director of Player Safety. I wonder what Barthes’ reaction would be to today’s game and the idea that speed eliminates the opportunity for conscious thought.

Lastly, I loved how he highlighted that the great players are not stars but heroes.  Hockey players, in the Canadian context, transcend the sport in many ways.  They come to represent everything that is good about Canada (whether truthfully or not).  These heroes become synonymous with Canada and their style of play reflect Canadian values (e.g., grittiness, believing in a greater good, fortitude) .  For someone who wrote about the political nature of myths, Barthes found, in hockey, one of Canada’s greatest myths.  But, for all that is wrong or unpleasant about our game, sometimes it is nice to leave the myth to the side and think for a moment: “a little frozen water, and hockey is possible.” 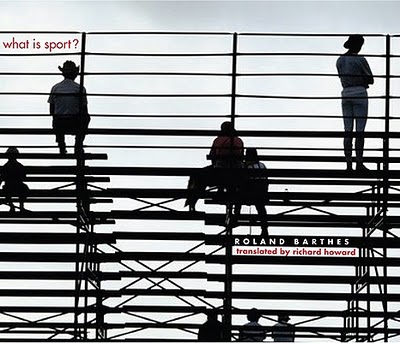