*Cross posted on The Rabbit Hole.

I have noticed that the new National Women’s Hockey League (NWHL) has been showing a lot of military appreciation on its Twitter feed recently. If you like women’s hockey and supporting the troops, it seems they have a jersey for you: 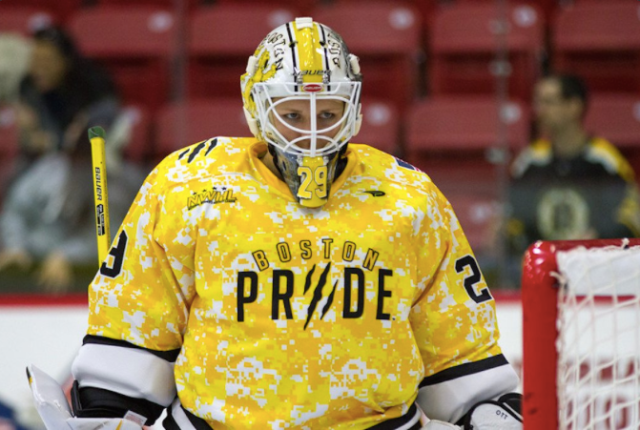 I wrote a piece in 2012 about the increasing militarization of women’s sports focused on (1) the uncritical interchangeability of sport and war, and (2) the expanding role of (and desire for) women in the military itself.  Since I wrote that post, I watched the documentary, The Invisible War (available on Netflix), about the prevalence of rape in the US military and the abominable way that it is dealt with “in house.”  As a result, when I saw camo jerseys on female hockey players this time around, I found it ironic, because, in a way, empowered women are (unintentionally) supporting the oppression and abuse of the women in that particular institution.

Now, I understand that supporting the troops does not necessarily mean you support war, or the military institution itself; but, you certainly aren’t denouncing or problematizing the issues either.  The NWHL explain on their website that the league supports, Defending the Blue Line, “an organization that provides hockey resources to children of military members….The [Buffalo] Beauts will host 50 military members and their families’…and will be wearing camo versions of their home jerseys to honor all soldiers.” (I wrote about Defending the Blue Line in 2012 here). Still, as I have argued elsewhere, if you wear the Ray Rice jersey you can’t say that you support “Ray Rice the Football Player” and not “Ray Rice the Domestic Abuser” because they are, in fact, the same person.  So I think, especially as a professional women’s league, the NWHL really has to question what it is supporting and reproducing through these types of military appreciation nights.

Rape in the military has been rationalized as an “occupational hazard.”  This boggles my mind. Friendly fire, sure, an occupational hazard, but getting raped at the Marine Barracks Washington by your own brethren – not an occupational hazard – that’s a criminal offence.  That it happens in a male-dominated institution is not surprising (and this is a disheartening fact, that we expect it), but the prevalence of military rape highlights how very irrelevant self-defence classes, rape whistles, and clothing are in a world of male entitlement.  These women are trained to defend nations and kill when necessary, and they are anything but safe. So really, is there any hope for civilian women walking home with their groceries?

The other thing that we accidentally support when we “support the troops” is a system that deals with everything “in house,” not unlike a sports team.  The logic here is that you don’t go airing your dirty laundry out in public. The US Military has interpreted this to mean that:

This is the definition of a conflict of interest; however, the military does not see it that way.  They don’t think it’s a problem when the only person you have to report your rape case to is your rapist. This is a structural problem.

I’m not saying that the NWHL and other women’s leagues shouldn’t support the troops and veterans, but, I do think that there are prime opportunities here to foster discussions about gender equality, and use sport as a vehicle for social change, instead of just a tool of cross-promotion.  Is this a political stance to take? Yes. Will it turn off some of your supporters? Probably. But, guess what? Women playing hockey is a political statement in and of itself.  Women’s hockey says “F@ck you and your gender norms” all while skating by and sniping it top shelf. As Tom Hanks says after scratching himself inappropriately for 30 minutes in A League of Their Own, “anything worth doing, is worth doing right.” So if you want to talk about empowering women and creating gender equality, then live it. I’m not saying you have to have these discussions during the game because, obviously, parents aren’t prepared to explain rape to their children at a hockey game. But, you can hold a panel, a press conference, or send out a press release highlighting how military appreciation night does not condone rape as an “occupational hazard”.  THAT is how you tap into a larger demographic, by showing that the league stands for more than just hockey. That is how you create not only space for women in hockey, but women in society.

Slava Voynov. Patrick Bartosak. Patrick Roy (what is with goalies?). (Allegedly) Patrick Kane. These are all issues that the NWHL, and CWHL, should be speaking about. It is in their interest as both as leagues and as players to try and foster gender equality in as many spheres as possible, because as long as rape is seen as an “occupational hazard,” good luck trying to make women’s sport matter on any grand scale. Once you take a step back, you realize it’s all part of the same game. And, we are team players, aren’t we?

One thought on “Camouflage jerseys: In support of, what exactly?”