Each winter, six of the seven Canadian NHL teams* host Armed Forces Appreciation Night, where teams ask season ticket holders to donate tickets to members of the Canadian military. Such events have a relatively recent history, started by Ottawa in 2003 and joined by the other English Canadian teams in 2006. 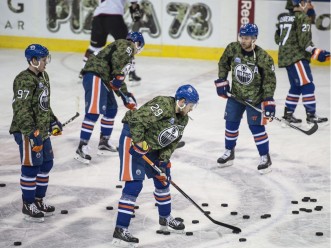 The calls for donations frame this as an opportunity to thank the military members for serving the country – Calgary Flames CEO Ken King sees it as a chance to thank the military “for your sacrifice and continued commitment to providing us a country where we feel safe, protected and enjoy all the liberties of freedom.” This notion of thanks is carried into the games through pre-game ceremonies and commercial break stoppage features (though also an opportunity to sell camo-print merchandise). These sentiments are not solely contained to appreciation nights, with military personnel highlighted at other times of the season. For example, in recent years, Luke Schenn and Joffrey Lupul of the Toronto Maple Leafs and Joe Colborne of the Calgary Flames have had charity initiatives to bring a military family to every game.

While the militarization of sport has typically been associated with the United States (and previously written about on this site), I will focus on its appearances in Canada for two reasons. First, my critique still applies to the general American context, so nothing is lost by focusing on the less discussed Canada. Second is to challenge Canada’s “angel complex” of feeling good because our problems are not perceived to be as bad as America’s. While Canada’s militarization does not compare to the U.S.’ post-9/11, it is not for the lack of trying on the part of the more conservative elements of Canadian culture (as can too often be seen in the NHL).

Jay Scherer and Jordan Koch (2010) wonderfully analyze one of the first of these events, a 2007 Edmonton Oilers game, to outline what the Canadian military in specific, and the Conservative government of Stephen Harper (2006-2015) in general, received from branding themselves with the NHL. They conclude:

The cumulative effect of these narratives was the articulation of soldiers and their families, military leaders, and Conservative politicians with affective national symbols and, of course, the promotion of personalized and patriotic representations of these interest groups as “ordinary Canadians (p. 12).

There is a clear sense of why a newly formed Conservative government would sell militarism through linkage to the classic symbol of Canadianess.  But, now a decade later, with such nights not fading despite the end of both Harper’s government and the official war in Afghanistan, I would like to flip this and focus on what does the NHL get out of its symbiotic relationship with the military?

Nancy Taber’s (2015) analysis of the 2012 Discover Canada Citizenship Guide shows how former Conservative Defence Minister Peter MacKay’s declaration the military are the “the best citizens of our country” is put into practice. In the guide, heroic images of (white, male) soldiers accompany glowing praise of sacrifice and of Canada’s supposed reputation among (European countries) for valour and fighting spirit. Cynthia Enloe (2016) outlines that making the solider the ideal citizen threatens a society because it endorses military values as good for all citizens. My criticism is not a statement against people serving in the military, who may or may hold these beliefs, but a statement against the institution of the military.  Among the ideas militarism brings are beliefs such:

To Enloe’s list, we can add an emphasis on “grit” (for example, the U.S. Army’s “Army Strong ad campaign”) and whiteness.

Hmm… do these values seem familiar? The worst traits of the NHL! The NHL may be fond of calling soldiers “the real heroes”, but they are happy to stress the resemblance between the cultures. There’s a reason this is the only profession which teams want their fans to “thank” for service to the nation, despite many other groups providing more for the country (while receiving less recognition). If the military provides the highest form of citizenship, and the NHL resembles it, then the exultation of military serves as a shield against having to address why it doesn’t better and more accurately reflect the Canadian population.

Even the mascot (NHL.com)

Kathleen Barry (2010) goes as far to argue that demilitarization is necessary to solve the crisis of masculinity. It is not enough to even “support the troops, but not the war”. For Barry, a militarized culture works results in desensitization (given the need for future violence and ultimate expendability). To value lives beyond a close circle is considered weakness, a dehumanization which enables a wide range of exploitation. And on top of its intended violence, military culture harms its own personnel, with epidemics of sexual assault and suicide. And it is also important to question why if our soldiers are our “best citizens” are they supported so poorly and often rely upon charity initiatives?

The NHL needs a healthier masculinity and this can not happen in concordance with militarization. Canadians can not take comfort in their supposed moral superiority to Americans while accepting neoconservative politics like militarization. For the NHL to become a more progressive space, fans must participate in de-militarizing hockey culture and find a better form of citizenship for athletes to model.

*= the The Montreal Canadiens have never had such a night, although they have worn military camo-print jerseys in warmups on Remembrance Day

One thought on ““The best citizens of our country”: The NHL’s vested interest in Military Appreciation Nights”