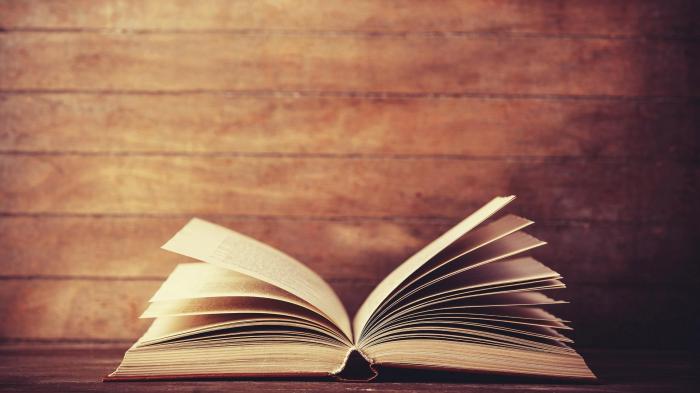 Summer is just around the corner which means you need some fun reading to enjoy while basking in the sun or travelling on a plane. Here is a list of 10 hockey books that may pique your interest. I have tried to pull from titles that were released in late 2015 through to ones that will be published in 2016; however, you will find a couple of older ones in there in an attempt to provide diverse reading options. Hopefully you find something to add to your summer reading list!

Quinn: The life of a hockey legend by Dan Robson (November 2015) 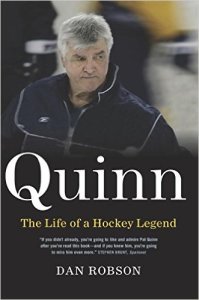 The hockey world suffered a great loss in November 2014 when Pat Quinn passed away. This re-telling of his life has been supported by the Quinn family and represents the legacy of an underdog:

Robson takes a good hard look at Quinn’s salad days, and the long, bumpy road the fireman’s son travelled from the outdoor rink near his childhood home in Hamilton to the NHL. Quinn emerges as a man with incredible drive and determination.

In the decade before he became an NHL regular, Quinn suited up for seven teams in as many cities. He moved from one city to another, first on his own and later with his wife and young daughters in tow. As honest with himself as he was with others, he knew his considerable size was his greatest asset, so he made the most of it, establishing himself as a respected enforcer. 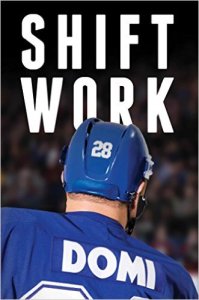 This memoir has been described as passionate, funny, and candid. After sixteen seasons in the NHL, I’m sure Domi has some good stories to tell.

The book is sure to hit the spot with hockey fans because, by taking them into NHL dressing rooms and discussing his relationships with teammates and rivals, readers get a better sense of what stars such as Teemu Selanne, Mario Lemieux and Mats Sundin were like off the ice. There are no shocking revelations on that front except, perhaps, that Domi once knocked Ed Belfour unconscious to end the star goalie’s drunken tirade. (Globe and Mail) 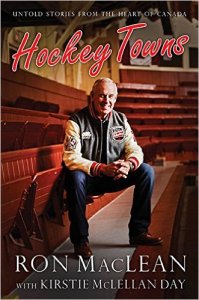 Each chapter in this book is a story about a different Canadian town. From Castlegar, British Columbia to Swift Current, Saskatchewan, all the way out east to Moncton, New Brunswick, the stories mirror MacLean’s nomadic childhood. These are the stories that don’t make it on SportsCentre.

As described in The Globe and Mail:

MacLean tells the story of Ian Jenkins, a promising young goalie whose life was tragically cut short, and details the arduous journey of tough guy Zenon Konopka’s family from Poland to Canada. There’s Trent McCleary’s miraculous brush with death after taking a puck to the throat.

Chapters on Bill Hicke and Doug Wickenheiser hit you straight in the heart, And his opening chapter on Mike Babcock’s stint as the coach of the University of Lethbridge Pronghorns in the early 1990s stands as a character study of the current Maple Leafs coach.

The idea for Hockey Towns actually preceded Hometown Hockey but the two projects have worked hand-in-hand.

Breaking Away: A harrowing true story of resilience, courage and trump by Patrick O’Sullivan (October 2015)

This won’t be a fun summer read but I dare say it should be a necessary summer read. Shortly after the book came out, Patrick O’Sullivan penned a piece for The Player’s Tribune and people responded to his honesty:

[L]et me be really clear about what happened to me. From the moment I got my first pair of hockey skates at five years old, I got the living shit kicked out of me every single day. Every day after hockey, no matter how many goals I scored, he would hit me. The man was 6-foot-2, 250 lbs. It would start as soon as we got in the car, and sometimes right out in the parking lot.

By the time I was 10, it got worse. He would put cigarettes out on me. Choke me. Throw full soda cans at my head. Every time I stepped on the ice, I knew that my play would determine just how bad I got it when we got home. I’d score a hat trick, and afterward we’d get in the car and he would tell me that I played “like a faggot” (that was his favorite term, which says a lot).

Hockey Moms: Realities from the rink by Julie Bertuzzi (October 2015) 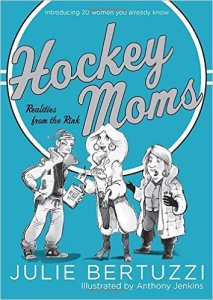 A hockey book about women! Sadly, it’s not about women who play hockey, but hockey moms/parents are an important part of hockey culture. You read that name right, Julie Bertuzzi is the wife of Todd Bertuzzi. As described by Goodreads:

Straight-shooting, observant, and uproarious, Julie Bertuzzi’s Hockey Moms is an irreverent look at the many kinds of moms you are sure to find in the ice rinks, on the road, and in the hotel bars at tournaments across this hockey-loving continent. While always applauding the dedication of moms who support their players — at early morning practices and on long drives to and from tournaments, in the triumph of a big win and the heartache of a big loss — Bertuzzi pokes fun at herself and her fellow Hockey Moms, and brings alive the many characters she has observed during her years of experience as a Hockey Mom herself. Whether it’s Big Mouth Betty shrieking from the stands, the Drama Queen stirring up trouble in the bar after a tournament game, Team Manager Mom with her clipboard and team jacket, the Yodeler, or the Leaner, readers will recognize and delight in these familiar profiles. This is a quick, funny read and a must-have book for Hockey Moms, and those who love them, everywhere. 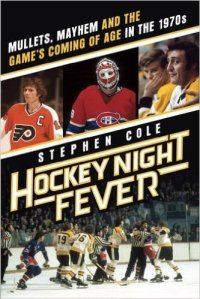 If you are looking for a little nostalgia, this is the book for you. It’s hard not to like a book with mullet in the title. If you want to re-live the heyday of the Habs, the 72′ Summit Series, and the debut of Slapshot, you had better get your hands on a copy of Hockey Night Fever:

Modern hockey was born in the sport’s wild, sensational, sometimes ugly Seventies growth spurt. The forces at play in the decade’s battle for hockey supremacy–dazzling speed vs. brute force–are now, for better or worse, part of hockey’s DNA. This book is a welcome reappraisal of the ten years that changed how the sport was played and experienced. Informed by first-hand interviews with players and game officials, and sprinkled with sidebars on the art and artifacts that defined Seventies hockey, the book brings dramatically alive hockey’s most eventful, exciting decade. 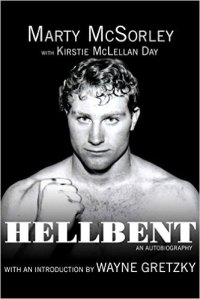 If you are a Marty McSorely fan keep your eye out for this one coming out in the Fall of 2016. Wayne Gretzky, unsurprisingly, wrote the forward for this book. McSorley talks about everything from the good times hoisting cups to the lengthy court battle that came with the dangerous on-ice incident with Donald Brashear. According to Amazon, “Hellbent is fast-paced, controversial, and thoroughly entertaining memoir that every fan of hockey will enjoy.”

Stickhandling through the Margins: First Nations Hockey in Canada by Michael Robidoux (April 2012) 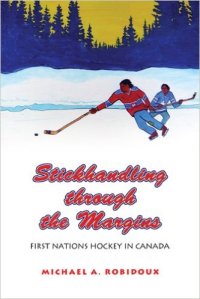 Okay so this one is 4 years old but if you haven’t noticed six of the seven books previously listed books are rather…homogenous in nature, making it seem as though people of colour do not participate in hockey. This is a necessary counter-narrative to the stories about enforcers, “underdogs” and Stanley Cup champions. Not everyone makes it to the pros but that doesn’t mean they don’t have a valuable story to tell. Robidoux spends time with First Nations hockey teams and learns about their approach and contributions to the game. For example, for some First Nations’ tournaments the overtime format starts with 5 on 5 and then every minute that no goal is scored each team removes one player from the ice until there it is 1 on 1 hockey of attrition. I don’t know about you, but I would LOVE to see that tried as part of the All-Star festivities. 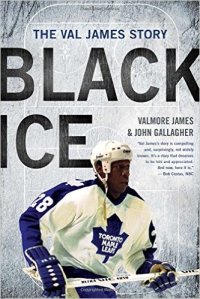 Keeping with the theme of diversity in hockey, this is the story of the first player of colour to skate with the Toronto Maple Leafs. You may know about Herb Carnegie or Willie O’Ree but what do you know of Val James? As one reviewer describes the book:

“Black Ice” tells an interesting and inspiring story, interspersed with colorful characters. It talks about making the correct choices in a career – and in dealing with the consequences when the wrong choice is made (or when the “correct” choice has negative consequences). It talks about people who are honorable beneath a rough exterior – and ones who are horrible beneath a polished veneer.

I found the book to be quite an enjoyable and comfortable read, and a good investment of my money, as well. 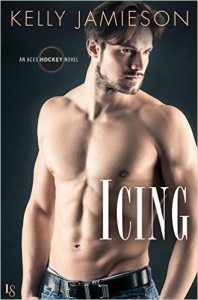 This one is hockey…but it’s from the romance genre! Did you know that there are “hockey romance novels”? I had no idea but Kelly Jamieson has been referred to by some as the “go-to author for hockey romance.” It’s definitely on the lighter side of the summer read list.

Duncan Armstrong may be an NHL star, but he’s a country boy at heart. His ultimate fantasy is going home with the Stanley Cup, not a gold-digging airhead who aspires to be a trophy wife and nothing more. Newly single and hoping to enjoy a night out with his teammates, he ends up hitting it off with a down-to-earth waitress who’s a complete breath of fresh air—until Duncan learns that she’s a part-time model. He tries to forget about her, but their sizzling chemistry has him coming back for more.

When I typed “women’s hockey books” in the Amazon search, 90% of the books that came up were these kinds of hockey romance books, or as Amazon explains it “romance stories for women”…

One thought on “Summer Reads: The hockey edition”