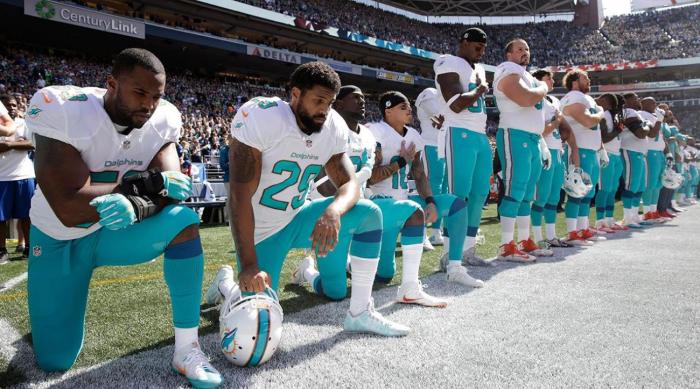 [Editor’s note: This piece was published in September, 2016. Given its relevance today, it is currently being pinned on the front page of Hockey in Society.]

Has any individual ever created as much of a stir for sitting as Colin Kaepernick?  Rosa Parks certainly sat in defiance but the two protests are far from equivalent, and Kaepernick would probably agree. Kaepernick is a famous man with financial stability and visibility. He also has a large base of “fan” support via the Internet; therefore, it is relatively safe for him to demonstrate a little civil disobedience. When US Women’s soccer player Megan Rapinoe took a knee in support of Kaepernick as an LGBTQ minority that was a significant show of solidarity across identities. When other NFL players used the opening weekend to raise a fist, take a knee, and “stand united” it made us wonder if any NHL players will join this wave of athlete activism when the regular season starts in October.

Oilers use Pride Tape during their 2016 Skills Competition.

Last week, during exhibition games for the World Cup of Hockey, John Tortorella made it very clear that he would not be buying a Kaepernick jersey any time soon when he stated that if any of his “players sit on the bench for the national anthem, they will sit there the rest of the game.” Brian Burke made a similar statement explaining that, while he supports a player’s right to “express opinions, vote, attend political rallies and make political contributions” he does not “believe that the field of competition is a place to make political statements.” This a surprising stance given that Burke and his family are integral to the You Can Play project – a political statement for LGTBQ inclusion and equality. So what would Burke’s response be if one of his player’s decided to use Pride Tape on his stick during a game? Earlier this year, the Edmonton Oilers used Pride Tape on their sticks during their annual skills competition – that was a political statement. It did not take place on the “field of competition” but if one of those players had decided to keep the tape on for the next game or two would that have been an unacceptable statement to make? Is this a case of “you can make statements when we tell you to make statements”? Or is this “we only make statements as a team”?

There are three key contextual differences between the NFL and the NHL that we have to consider when discussing protests of racial injustice.  First, hockey remains a very white sport. Despite increasing numbers of minorities being drafted to the NHL, whiteness remains the norm in hockey culture. By contrast, approximately 2/3rds of NFL players are African American. Major League Baseball (MLB) player Adam Jones recently stated that we will not witness anthem protests in baseball because it is “a white man’s game” and black players are not integral to the success of the sport. Hockey finds itself in a similar situation. Jones’ comments were not simply about the number of white athletes in the sport, but also the likelihood that the white-dominated culture of baseball would support protests against racial injustice. If Jones is correct that a league that is 8% African American and 30% Latino would be hostile to joining the NFL’s social protest, what chance would do we have of seeing a protest against racism in the NHL, a league where estimates state that only 30 of 700 NHLers (4.2%) are visible minorities? The answer: not very likely.

Second, the NFL is overwhelmingly US-born (96.5%, according to 2011 figures), whereas Americans make up a much smaller percentage of NHL players (24.3%, in 2014-15). There are thus far more athletes in the NFL with direct experience of the injustices being protested and personal and community stakes in the ongoing struggle. The NHL, a league that is still over 50% Canadian-born, seems less likely to see widespread social protest against events and policies in the US. Even though Canada has its own significant racist histories and social structures to confront; it seems extremely unlikely, however, that hockey arenas will be a leading site for addressing these critical issues.

Third, hockey culture is both extremely conservative and suspicious of (even hostile to) individual self-expression. Think how Don Cherry—somewhat of a bellwether for hockey’s cultural old guard—reacted to exuberant goal celebrations by Alexander Ovechkin or the time that old school Montreal Canadiens coach Michel Therrien banned the fun “low five” celebration of P.K. Subban and Carey Price. Hockey also has a cozy relationship with the military and local police forces in Canada and the US, and it goes almost entirely unquestioned that teams regularly have military appreciation nights or celebrate local law enforcement. In such a cultural climate, it would take a tremendous amount of courage by individual players to protest the national anthems that play before each game. Given how the American media and sport establishment has framed Kaepernick’s protest—conflating his protest against police brutality with being anti-US military—it is nearly inevitable that a hockey player would face similar backlash. And given the pro-military and anti-individualism culture of the NHL, that hypothetical protestor would be risking major criticism from fans, management, and other players; as well as the potential loss of sponsorships and, if he becomes branded as being an “anti-team” player or “bad in the locker room,” the possibility that he will not be signed by any team when his contract expires.

Sports editor Dave Zirin recently pointed out during one of his recent podcasts that the National Basketball Association (NBA) (led by Commissioner Adam Silver) made some odd decision making when it decided to pull its All-Star game from Charlotte, North Carolina because of the state’s homophobic and transphobic bathroom law, then conversely turned around and fined three WNBA teams and numerous players for supporting Black Lives Matter with warm-up t-shirts. The fines were quickly rescinded but the contradiction had already happened: Silver used basketball to make a political statement in support of LGBTQ rights but that same sport could not be used to support Black Lives Matter. Zirin goes on to argue that Silver’s decisions had nothing to with social issues, but instead were demonstrations of power. Thus, sports and politics are only allowed to mix when the conditions are determined by those in suits and not those in jerseys. Moreover, LGBTQ rights have been a more favourable cause to support for professional sports because that particular demographic represents an untapped market and an opportunity to sell rainbow merchandise. On the other hand, Black Lives Matter protests have all started with the players, not the suits, and it amplifies a set of voices that are integral to professional sports: the young black man. And, as Zirin and others have pointed out, we cheer black bodies but we rage against black voices.

While the Kaepernick-led protests continue to make waves across the NFL, and NBA players speak up about racial violence, it is unlikely that we will see anything remotely similar in the NHL. So John Tortorella can sleep peacefully at night, knowing that his players are unlikely to wage silent protest during the national anthems. And J.T. Brown’s recent comments—which, while courageous, were rather tepid in the extent of their critique—are likely the most extreme reaction we will see emerge from the conservative culture of the NHL.

But what would happen if someone as valuable to the league as P.K. Subban decided to sit during the anthem(s)?  What if his fellow racialized players joined him? What if another minoritized player such as Carey Price (a proud Indigenous Canadian) decided to show solidarity? Would the NHL punish Sid the Kid or Carey Price? And, to test Tortorella’s claim, what if the NHL’s beloved Patrick Kane were to sit out the anthem? (#WhenPigsFly)

It is not a coincidence that the lack of colour in hockey means that there has been very little social unrest brought to the League’s (and fan’s) attention. The NFL has yet to have a white player kneel in solidarity with Kaepernick so the likelihood of someone in the NHL reaching across Leagues to show support is lower than Gary Bettman not getting booed by fans; still, hopefully someone in the NHL will put this issue on the radar.

The NHL may choose to stay silent on this issue but that says plenty.

2 thoughts on “Any takers? Will NHL players support the Black Lives Matter protest?”