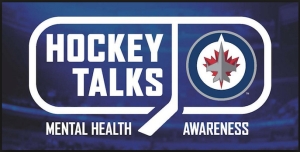 Every February since 2013, the seven Canadian NHL teams host Hockey Talks, a NHLPA led program aimed at “destigmatizing” mental illness. The effort was initiated by former Vancouver Canucks defenceman Kevin Bieksa after teammate Rick Rypien’s suicide in 2011. In addition to media spots, public service announcements, and the hashtag #hockeytalks, the team’s websites link to resources for help (the Canucks even funded a BC Mental Health and Addiction Services resource website, mindcheck), wear Hockey Talks apparel and helmet decals, and raise money for charity through merchandise and 50/50 sales.

The metadiscourse on @Canucks

In a league intensely committed to maintaining the status quo, this seems an admirable program. Spurred to action by several NHL player deaths due to suicide or overdose, players have embraced the idea the mental health/illness needs to be discussed, to a point. But five years into the program, the aims of destigmatizing mental illness run the risk of stalling. This is best exemplified by NHL players’ support of Bell’s (a former league sponsor, current team sponsor) Lets Talk campaign, which donates 5 cents per tweet hashtagged with #LetsTalk to mental health organizations. However, it’s common for players to tweet just the hashtag, creating a metadiscourse about talking rather than actually facilitating dialogue about mental health. “Let’s talk” becomes a self-satisfied message, that NHL players support talking, but only when it’s other people doing it. If every player is only an ally, who is being helped?

That no current player feels confident to stand up as an example of someone managing a mental health issue is hardly surprising given the NHL’s culture. Every team’s site emphasizes that 1 in 5 people will deal with a mental health issue, yet not a single active player has shared their experience. Despite Toronto head coach Mike Babcock’s emphasis that “mental toughness and mental illness have nothing to do with one another” I have a hard time imagining the press and fans always making this distinction. Corey Hirsch’s piece for the Player’s Tribune (with accompanying video for the Canucks) where he poignantly discusses his OCD anxiety, provides good insight into barriers players might face discussing their mental health. As Trevor Linden recalls “at that time [1996], a NHL locker room for someone who’s struggling with challenges like that, it’s an unforgiving place” – this is meant as reassurance that things have changed and I hope they have, but at the same time, how can we know when the NHL only talks around the issues? Hirsch remembers he didn’t want anyone to know, and this is something we need to remember, that even if logically you know people will accept you talking, the depression and/or anxiety makes it so hard to ask for help. This must be particularly difficult when it’s against the very ethos of the NHL that the path to success is through sheer will power and hard work (not to mention that there is always someone there to take your spot).

Like Hirsch, only former NHL players have discussed their mental health issues, including Dan Carcillo, Clint Malarchuk, Stéphane Richer, Sheldon Kennedy, and (current AHLer) Paul Bissonnette. This is valuable as it retroactively demonstrates you can succeed while managing mental illness, but it makes it seem like something you only talk about when you are “better” rather than in constant management and only when your career is no longer in jeopardy.

Responding to the 2015 death of Steve Montador, Hayley Wickenheiser in the Player’s Tribune makes the connection that in hockey it’s nearly impossible to not internalize the individuality of the sport, the loneliness of constantly needing to prove yourself. She identifies “we leave it too much up to the player who is hurting to seek the help”. And Hockey Talks does not do enough to address this. It’s aimed at giving people courage to speak up, but not by showing they are not alone, rather that people will be there for you if do want to talk. The commitment to support does not even necessarily go so far as reaching out to someone who seems to be struggling. Despite the discourse around teamwork and camaraderie, the solution to mental health remains individual and not communal. Additionally, much like concussions, mental health should challenge masculinity’s demands to suppress pain. But, much like how concussions (see the NFL’s PSA “Be Man Enough to Admit When You’re Hurt”), Hockey Talks reconceptualizes mental health within a masculine framework, with such imagery as “breaking the silence” or “battling depression”.

Victoria Silverwood wonderfully wrote in 2015 about how the NHL eludes talking about the complex factors determining NHL players’ mental health by emphasizing the role of concussions. While having a demonstrable cause seems to have given some former players confidence to speak about their depression, it’s also misleading as one hardly needs a concussion history to experience mental illness. And, given how poorly the NHL deals with players taking time with concussions, what pressures would be on a player to play through bouts of anxiety or depression? The linkage to concussions specifically and analogy to physical health in general focuses mental health as form of injury, which allows the NHL to ignore the social factors of mental health. Hockey Talks never interrogates the myriad ways NHL culture could lead to poor mental health.

Hockey Talks is a wonderful idea that has already created some good resources. Yet how it talks about mental health reveals how far the NHL has to go. To avoid stagnating, the conditions need to be created where an NHL player could say “I deal with a mental health issue” rather than “I would listen to a friend who has one”. Talk must then be followed by action. Wickenheiser calls for a “comprehensive support system for those struggling with depression, anxiety and the aimlessness that comes with finding a second life after hockey” (and expand this to include active player’s issues as well). Doing something like this would indicate the NHL is actually addressing mental health rather than solidifying into another movement primarily about feeling good about oneself.

6 thoughts on “Talking About Hockey Talks: The NHL and Mental Health”