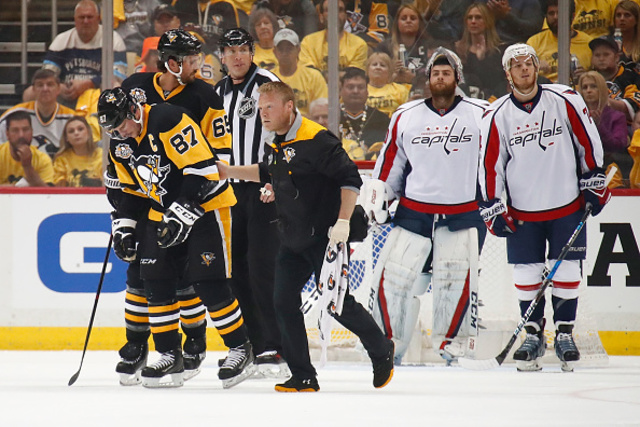 Sidney Crosby leaving Game 3 of the second round versus the Washington Capitals. Photo from WKBW Buffalo.

I was eating dinner during Game 5 of the Capitals/Penguins series last night when I heard Elliotte Friedman referencing an academic journal about concussions during the second intermission. You don’t often hear hockey pundits talking about academic research so that got me out of my seat.  I walked into the living room and witnessed Friedman tell all the hockey parents and kids watching that new research encourages activity after a concussion rather than rest.  His example of why this science might be worth following was based on the excellent play of Sidney Crosby who returned after being diagnosed with a concussion during the game on May 1st. What he said about the research is true. But it is a partial truth, and that’s why what he said was dangerous and irresponsible.

For a number of years now, many researching head trauma have been advising mild to moderate activity as part of post-concussion treatment. MILD to MODERATE activity. Two words that Friedman omitted from his segment and essentially replaced with: participate in playoff-style, high intensity hockey.  The Montreal Gazette reported just a few weeks ago, “aerobic exercise is the best option for those early days after being diagnosed with a concussion.” FYI: Hockey is NOT an aerobic activity, especially not playoff hockey.  Other popular sources have managed to report on this same research finding and maintain light activity as the central takeaway:

Now I’m not a concussion researcher but I do spend my days reading academic research and have access to original articles, which most people are not privy to. So I looked up the article that Friedman was talking about in The British Journal of Sports Medicine (which he tweeted about as well) conducted by the Concussion in Sport Group and it doesn’t say anything about returning to full contact hockey. The premise of the article is about updating a concussion assessment tool and the closest thing that I can find in it about returning to activity is this:

And, I’m not the only one who caught this “error”:

The article he ends up retweeting from Dr. Jessica Page is from The Journal of the American Medical Association, and then the good Dr. ends up sending him the correct article, “Rest and treatment/rehabilitation following sport-related concussion: a systematic review” from The British Journal of Sports Medicine. That article states, “A brief period (24-48 hours) of cognitive and physical rest is appropriate for most patients. Following this, patients should be encouraged to gradually increase activity. The exact amount and duration of rest are not yet well defined and require further investigation.” Either way you slice it no research team, that isn’t funded by the National Football League, is saying that athletes should return to full contact competition until they are cleared by a doctor.

The best available evidence suggests that complete rest exceeding 3 days is probably not helpful, gradual resumption of preinjury activities should begin as soon as tolerated (with the exception of activities that have a high MTBI [mild traumatic brain injury] exposure risk), and supervised exercise may benefit patients with persistent symptoms.

We discourage a return to high-risk activities soon after injury because of vulnerability to reinjury. However, we encourage a gradual return to activities and exercise as tolerated, and strongly recommend starting a return to school/work after only a day or two of rest in most cases. Resuming activities should ideally be gradual and at a pace that does not exacerbate symptoms.

Current evidence suggests that an initial period of rest appears to be beneficial. Further research is needed to evaluate the long- term outcomes of rest (including the quality and quantity of the rest). Low levels of exercise may benefit the athlete postinjury, but additional study is required to determine the optimal timing for initiation of treatment postinjury.

It’s true that Crosby was cleared to play Game 5 so this “alert” is not a comment about Crosby or the Penguin’s doctors. The problem is when we use professional athletes (individuals who are paid to sacrifice their health) as an example for those watching at home.  Sidney Crosby is usually used as a cautionary tale about concussions but this time he was used as a misguided and dangerous example to say that maybe concussions aren’t such a big deal because hockey might actually be the solution to the problem.

Friedman pointed out that what we know about concussions is really in its infancy, and this is accurate. I assume Friedman was trying to be optimistic when he said, “If [Crosby] can perform like that, maybe there’s hope out there for a lot of people who’ve had concussion issues…”. Unfortunately, this “hopeful” message failed to impart a crucial part of the research and encourages young players to jump back into the game like Sid did.

If this was an inadvertent message then I encourage Friedman and Hockey Night in Canada to clarify it immediately and on multiple platforms.  On the other hand, if this was another example of the media cherry-picking research to suit its interests (i.e. the NHL benefits from the public having a lax/misinformed perception about concussions) then hockey fans are going to have to learn how to siphon out the “fake news.”