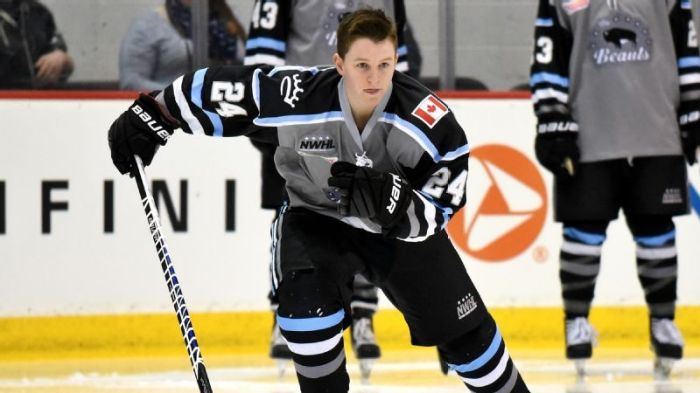 Co-Authored by Cheryl MacDonald and Courtney Szto (with assistance from Brock McGillis).

This fall season Ontario hockey coaches have an additional mandate: they need to talk to their players about gender identity. While the intent behind this move is seemingly progressive and an important step towards achieving gender justice, it also raises a host of questions and concerns. Case in point, here are some of the comments that were made on the Hockey Night in Canada Facebook page when a CBC article about the issue was shared:

When speaking about LGBTQ2+ progress in hockey, especially boy’s and men’s hockey in Canada, Ontario serves as a leadership example because, in 2016, it became the only province with a trans-inclusive policy governing hockey athletes. Thus, the Ontario Hockey Federation (OHF) is building on this legacy with its mandated gender identity and gender expression training. It is important to point out that these implementations were reactionary and not preventative measures. Both the policy and training were created as a result of documented discrimination against an athlete and not because the OHF sought to put its most progressive foot forward. Indeed, social responsibility in the hockey community is too often a reaction that takes flight because it affects a person in power or as a result of harm already done.

Let’s address the sentiment that gender identity discussions should only take place with one’s parents. It would be amazing if every parent sat their children down and talked to them about gender identity and gender norms, but as the tweets above allude to — some are never going to do that. They either do not feel equipped to have such a discussion or they simply do not believe that there are various gender identities. But hockey exists within the public sphere, which means that as a public institution or even as a corporate institution, it needs to adhere to standards that the private sphere may not need not consider. In 2013, Ontario transgender athlete Jesse Thompson filed a human rights complaint against Hockey Canada because, as one of his interviews with CBC revealed, “he felt being forced by a minor hockey league to change in a separate dressing room during the 2012-13 season ‘outed’ him and exposed him to harassment and bullying.” He also stated that going to hockey gave him anxiety and that he had considered quitting as a result. Hockey needs to deal with the public and understanding how to appreciate various gender identities is increasingly a public concern, which is why we cannot simply leave these discussions for parents to handle.

Additionally, according to a multi-national study conducted in 2015 (Out on the Fields), LGBTQ2+ athletes are more likely to abandon sport participation due to its cis-normative and heterosexist environment. Hockey is already facing declining numbers (particularly among boys); therefore, making it a more hospitable environment needs to be a high priority. So what exactly does this gender identity and gender expression training look like?

With the input of Egale Canada Human Rights Trust, the OHF has provided two training modules for officials as well as a glossary of terms and a guide/checklist for speaking to players ahead of the season. The training modules are only available to those with eHockey accounts under Hockey Canada, but the other two documents are readily available on the OHF website (click to see the glossary and pre-season checklist). These two resources are comprehensive and in keeping with the spirit of inclusion, they encourage coaches to: ask players for their chosen pronouns and share their own, talk about respecting privacy, and help players better understand that sometimes it can be taken for granted in the dressing room that someone is not heterosexual or cis-gendered.
This brings us to the next question: Should coaches be the ones delivering these modules?

In our opinion, while it makes sense in terms of resources and continuity to have team officials undergo this training, they should NOT be the first line of education for the athletes. Why? Because not all of the coaches take this seriously. Not all of them agree that this training is necessary or useful. Not all of them are comfortable with the presence of LGBTQ2+ athletes on their teams to begin with. Moreover, the instructional video made by the OHF features two administrators reading monotonously from a script and showing very little enthusiasm for the subject. If the people at the top are not both knowledgeable and passionate about the subject, why should others get on board?

The following are three instances that illustrate why coaches should not be given this responsibility:

Who then should be doing this training? First, we are confident that Egale and the OHF, if not Hockey Canada, have the (collective) resources to send experts to speak with minor leagues across Ontario. Additionally, someone like Cheryl has done gender and sexuality workshops with minor hockey players across Canada at no cost and has had athletes express that their advanced knowledge served them well in places like combine interviews. Brock McGillis also travels across Canada sharing his story. His speaker fees are negotiable and his perspective is one that no one else can offer at the moment because he has the first-hand experience of being in a professional-level dressing room and wanting to end his own life. In the US, former college hockey player Voight Demeester  came out to his team and penned an article about it having been relatively painless, all things considered. He is also happy to speak to others about his experiences and assist in any way he can. They may be few, but there are people in the hockey community who are both prepared and wanting to educate others. It’s a matter of breaking through the insularity and accepting the assistance.

To conclude, while we believe that this type of training does need to take place in locker rooms, mandating coaches to be that conduit is not necessarily the best way to approach the subject matter. We suggest that experts and advocates of LGTBQ2+ equality should be at the frontlines in order to ensure some level of consistency and preparedness for the discussions that should ensue. Coaches and parents should be allowed to sit in on these trainings as well because it is about making the hockey community more inclusive rather than just the players.

One thought on “Chalk Talk: Should gender identity education be a coach’s responsibility?”