Last month, we looked at one aspect that makes women’s sports far more interesting than men’s sports – that fact that women athletes have to cultivate a life beyond the playing surface. This is largely the result of different gender expectations, combined with a different high performance pathway, and topped off by the inequitable labour structure of women’s professional hockey. We highlighted 10 CWHL players who are up to some awesome things [For the full pre-and post-amble check out: Renaissance Women of the CWHL]. With the NWHL All-Star game coming up this weekend, it’s time to shine a light on some awesome women playing below the 49th parallel.

Photo from The Athletic.

Babstock is the NWHL’s only Indigenous player. She is a member of the Wiikwemkoong First Nation and an inductee to the Little Native Hockey League (LNHL) Hall of Fame. The Little NHL (as it is commonly referred to) is an Indigenous hockey tournament of over 200 youth teams. In 2018, she ran an all-girls hockey camp on the Wiikwemkoong Unceded Reserve. Babstock also coached in last year’s National Aboriginal Hockey Championships and works as a lacrosse coach. (Instagram: @bahbz8)

After hoisting the Isobel Cup with the Metropolitan Riveters to end the 2017-2018 season, the Harvard grad stepped away from the game for the first 4 months of this season to help campaign for Amy McGrath, the Democratic candidate who ran for Congress in Kentucky’s 6th district (McGrath was defeated by Republican Andy Barr). She plans to attend Stanford Law School after she finishes this season with the Riveters. Oh, and in her spare time she and her brother are writing a screenplay about Japanese-American internment during WWII. #WHAAAATTTT (Instagram @medoench)

Eisenschmid represented Germany at the 2014 Sochi Olympics and this is her first NWHL season. She recently completed a Master of Arts in International and Intercultural Communication, and is a published researcher with her 2018 co-authored article (with Soojung Kim & Sarah Cavanah) “Effects of Controllability of Athlete Celebrity Endorsers’ Drug Scandals on Punitive Opinions: Sensation Seeking as a Moderator.”  Eisenschmid has also studied trends of what gets the most likes on women hockey player’s Instagram accounts.

Greco pulls a double shift for the Beauts as both player and Marketing Manager for the team’s ownership group, Pegula Sports and Entertainment. She holds an MA in Television, Radio, and Film Studies Production and also co-founded a phone app that intended to get people off of their phones and interacting face-to-face. Greco was a comedy writer for Syracuse University’s cable channel, and ran media relations and video production while playing for Syracuse. She does it all folks! (Instagram: @jacquiegreco_)

2018 was a big year for the Riveters forward. Gruschow started a Master’s Degree and won the league’s MVP in the same season! She is working on an MSc in Nutrition and Health Sciences at Montclair State University and hopes to work in new food product development. Even though she misses the Riveters’ Tuesday practices because it conflicts with her class, she continues to excel with the team.

What drew Johnson to hockey? Watching The Mighty Ducks! No joke. Her off-ice life involves being the Coordinator of Nonprofit Programs for Volunteer Engagement at a Boston organization called Building Impact. In Johnson’s own words:

[Building Impact specializes] in working with companies and bringing volunteer services into their companies on site and we also do corporate in-service.  We’ve done corporate in-service for TripAdvisor  – a lot of big pharmaceutical and healthcare companies in the Boston Area, especially downtown.  That’s my 9-to-5 and I absolutely love it.  I’m all about finding ways to give back to the local community.  I really got into that when I was at [Boston College], when I was in the Student Athlete Advisory Committee.  I really found my niche there and I wanted to help other people give back to their local communities.  I actually, technically, have three jobs (laughs).  I also coach but that’s more just for fun to give back to the game.  I coach with the New England Pride.  I have a 12-U girls team and I coach Saturday morning with their 8-U kids – so I have fun with that. (DirtFork)

Humble as she is, her work bio makes no mention of her weekend job. (Instagram: @kleaa42)

Orlando is a hockey player by day and a nurse by night, working at a HIV/AIDS care facility in New Haven. She completed a MBA in Health Care Management. In addition to playing college hockey, she was recruited by the school’s rugby team despite having never played the sport. #Skillz

She won a Clarkson Cup with the Boston (currently Worcester) Blades during the 2014-2015 season in the CWHL. Ott followed up that performance with a trip to the Isobel Cup with the Pride. But on ice accolades aside, take a good look at this face because she may end up saving your life one day:

Ott’s “day job” is as an emergency medical technician (EMT) for Fallon Ambulance Service in Quincy, Massachusetts. As of 2017, her plan was eventually to go back to school…(Instagram: @bott29) 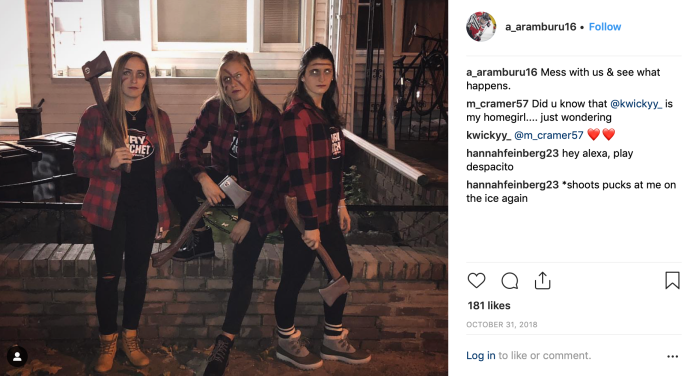 They teach people how to throw axes. Need we say more? The three of them work at Bury the Hatchet, an axe throwing venue in Paramus, New Jersey. Here is Richards describing her day:

I usually get in like 11 am and answer some phone calls, drill up some wood, wait for customers to come in and then teach them to throw axes. Let them have fun, play some music, and just have fun with it. (NWHL)

While it’s far from ideal that these young women have to earn a living in order to support their hockey, as far as work-life balance goes – this seems pretty awesome! (Instagram: @a_aramburu16)

When Sass isn’t being a wall in the Riveter’s net, she’s building actual walls for her day job (well, technically designing them)! Sass has a Master’s of Architecture and is an architectural designer with a firm in New York City. She is also half of Rusted Tower Design, a custom design team that sells art and woodwork. According to the Rusted Tower Design Facebook page:

She loves to draw and paint with lines and bits of color //wonky lines in particular// and perspective that is subtly off. Water towers are her muse. She loves to explore through means of photography, and is always brainstorming new art installations. Kimberly excels at custom drawings of homes, portraits of pets, and image transfers on wood. She also adds flare to specific wood projects, such as custom baby blocks, by adding pops of color. 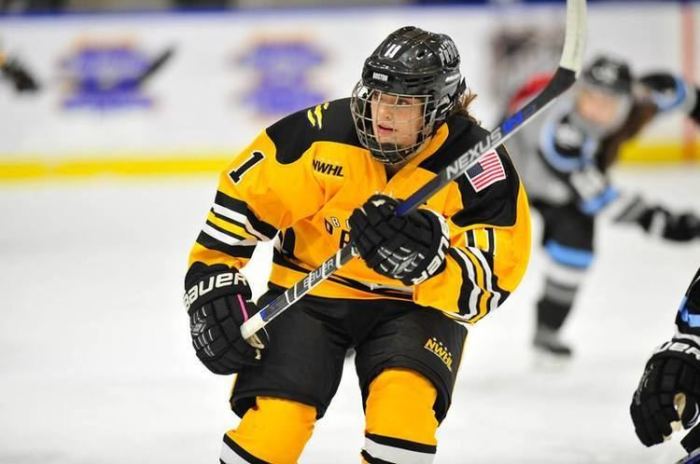 Hockey players often need surgeries, but not many work on technology used during them. Smelker is a biomedical engineer at Haemonetics, a company that makes blood collection and separation devices. In 2016, she co-patented a method for removing fat from blood lost and then salvaged during surgeries. #NBD (Instagram: @smelkj)

Show your support for the NWHL by: