Calgary Flames advertisement at the Saddledome. Photo by Jim Wells/Postmedia.

You may be familiar with the movement to divest from fossil fuels broadly in our every day lives, but you likely haven’t heard of any sports organizations, teams, or leagues divesting. That’s because sports is slow. Sports, as an industry, is generally slow on the uptake with respect to social issues, which is why the NHL continues to pat itself on the back for buying carbon offsets when the rest of the world is trying to adopt more radical environmental solutions, with divestment being part of the solution.

Divestment, in simple terms, means pulling our financial support from “unethical or morally ambiguous” financial investments. Divestment is meant to signal a break from the past in order to actively support the future we want. In other words, we need to de-fund the fossil fuel industry if we are going to properly fund clean energy options such as wind and solar energy:

Fossil fuel companies cultivate sponsorship relationships to help create a “social licence to operate.” This contributes to the veneer of legitimacy that enables them to keep expanding operations at a time of climate crisis and to stifle the demands for justice of those communities who live on the frontline of their destructive, polluting operations. (gofossilfree.org)

In hockey’s case, it’s less that it invests in fossil fuels and more than it willingly gets into bed with these companies; thus, divesting in this case simply means shifting engagement away from the extractive industry.

Divestment is not a fringe movement. In January 2018, the city of New York committed to divesting $5 billion from fossil fuels. Over 133 universities around the world, including Stanford, Oxford, Cambridge, and Yale have all committed to divestment. Canadian universities, unfortunately, have been dragging their heels in joining the fight. Only Laval University has committed to divestment. As journalist, author, and environmental activist, Naomi Klein explains, “Canada was an extractive company –the Hudson’s Bay Company–before it was a country. And that has shaped us in ways we have yet to begin to confront.”

The NHL is supposed to be a leader in sustainability, which is why it has been present at high level environmental gatherings such as COP 21 where the Paris Agreement was adopted. This is, of course, a voluntary position because we live in a voluntary society. We opt in to environmental sustainability with very few regulations and/or accountability; hence, our climate crisis. One only need to look at the NHL Green Twitter account (that was created in 2014 to coincide with the launch of the league’s first Sustainability Report) to question the NHL’s commitment to environmental issues because there is only one tweet. The account follows 57 folks, none of who are seemingly environmental activists or environmental organizations. The NHL released its second sustainability report in 2018 sharing metrics such as a 32% diversion of food waste through composting programs, a 7% decrease in water consumption, and a reduction of CO2 emissions by 2% per year from 2014-2016. These are of course important measures to take.

Most recently, the league announced that it was going to purchase carbon credits in order to offset the approximately 465 metric tons of carbon emissions created from playoff air travel (air travel represents the 2nd most environmentally harmful part of the League’s operations according to its own reporting). I wrote about the NHL’s use of carbon offsets a few years ago but the Cole’s Notes version is that you basically buy the right to continue polluting. You change little to nothing about your activities and instead shell out some money for someone else to “offset” your environmental damage by planting some trees or paying for environmental research etc. Environmental activists and climate scientists do not recommend carbon credits or offsets as solutions because they aren’t actually helpful. Consequently, if NHL Green’s mission is to “ensure the sport of hockey thrives for future generations,” and it wants to “mobilize fans to take sustainability actions,” all while reducing the impact of hockey, it really needs to start dissuaded its clubs from holding things like the Edmonton Oilers’ Loyal to Oil night, or allowing the Calgary Flames to give away free advertising space to pro-extractive industry groups (without even being asked). 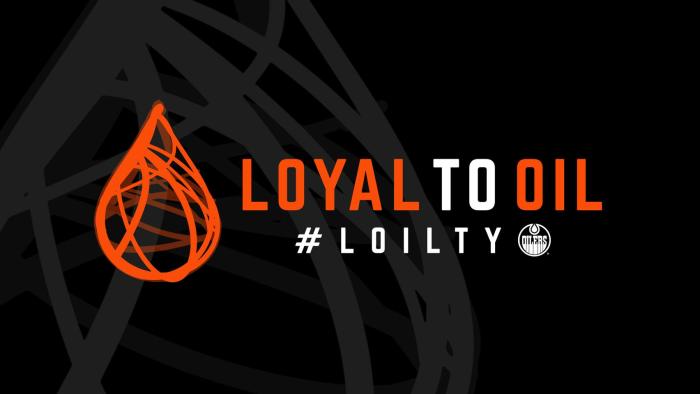 On January 22, 2019 the Oilers rationalized its Loyal to Oil night as a way to host:

more than 250 members of the oil and gas industry and their families to show support for the individuals and communities who are facing challenges because of the obstacles the industry is currently encountering and raise awareness about the positive, national impact of the sector.

The Oilers’ AHL affiliate, the Bakersfield Condors held an event called “I am the Oil Industry” in partnership with Kern Citizens for Energy. The event was advertised as, “celebrating Kern County’s rich heritage and more than 100 years of petroleum’s contribution to our energy independence and exceptional quality of life.” Deadspin, however, pointed out the irony that encompasses the Bakersfield Condors:

the new mascot for the Bakersfield Condors is an “oil-themed, superhero mascot.” That’s a really bad mascot! Objectively, it looks like a orangeish penis with a smiley face wearing a cape, and if you gave any normal person 20 guesses as to what the mascot was, they wouldn’t guess an oil drop because why would anybody make an oil drop a mascot? And then, of course, there is the obvious irony of a team named after a bird on the State of California’s threatened and endangered list unveiling a mascot that represents one of the very things threatening and endangering that bird. [One of the biggest threats to the condor is the expansion of oil, gas, and fracking sites]

Extractive industries such as oil, gas, and coal are going through, what the Oilers refer to as a “tough time” precisely because they are neither environmentally nor financially sustainable. Whether or not you believe that the extractive industries are contributing to climate change, it is a fact that oil, gas, and coal are finite products. So, we can either keep digging deeper and deeper into our planet and wait for the day when there is no more, or we can start to transition (preferably 30 years ago) to renewable energy sources. I understand that there are lots of jobs and livelihoods that count on pay cheques from the extractive industries but divestment isn’t pro-unemployment, rather it’s pro-long-term employment. Other sports organizations such as the Premier League Football club Arsenal is going fully renewable energy to power its 60,000 seat stadium and training centre. The Mercedes-Benz Stadium in Atlanta has also shifted to a significant use of renewable energy, “but no major sports organizations have joined the RE100 as yet – a group of companies committed to using 100% renewable energy, while also attempting to pressure organizations in their supply chains to follow suit.”

Surely, if Texas (the Alberta of the United States) can understand that renewable energy represents the future, then so can other traditionally oil-dependent economies:

Some people are naturally worried about a lack of dollars if they divest from fossil fuel companies or reject sponsorship from the sector but “there’s evidence that well-constructed fossil-free portfolios can match or even outperform those that include coal, oil and gas companies.” Thus, other lucrative sponsorships and investment options exist, we just need the political will to pursue them. And the more people who do it, the more successful those alternatives will be. Divestment makes both moral and financial sense, not to mention that “investors will have a fiduciary responsibility to address climate risks.”

This is not just about the NHL and its clubs but the NHL is the easy target because of its self-proclaimed commitment to environmental sustainability. The history of hockey in Canada is intimately intertwined with the oil industry, in particular Esso/Imperial Oil (also known as Exxon Mobile in other parts of the world). According to Esso’s own website, Esso sponsored the NHL’s first radio broadcast in 1936. Our 3 stars of the game tradition is a legacy of the marketing campaign to support Esso’s “Three Star” gasoline. Esso runs countless events for minor hockey including the Esso Cup, a national U-18 tournament for girls (notice I didn’t use the “m” word because of this piece I wrote in November last year). It is also a founding sponsor of the Hockey Hall of Fame. Thus, hockey and big oil have had a long and lucrative relationship but times are changing and the NHL’s two sustainability reports are meant to prove the very fact that we can no longer maintain the status quo. I understand that losing a Canadian company with deep pockets presents big proverbial shoes to fill but if the science is correct, they would have to be filled within the next 12 years anyways. If we wait until the point where new sponsors were needed because the extractive sector’s “tough times” devolve into extinction, climate change may have already taken away our ability to skate and play hockey. What were typically 50 day seasons to skate on Ottawa’s famed Rideau Canal have been reduced to 25-34 days in recent years. And, Wilfred Laurier University’s Rink Watch citizen science project, catalogued a 25% decrease in recent years for skateable days on Toronto’s outdoor rinks. We are already skating on thin ice in a very literal sense.

Importantly, this doesn’t mean that companies like Esso have to be cut off completely from involvement in hockey, but it would mean that the hockey community needs to demand a shift in Esso’s priorities in order to maintain a relationship. Trade Loyal to Oil nights for “Keen for Green” events. Or the Flames could offer “I {heart} wind and solar” free ice advertisements. Major fossil fuel companies such as Shell, BP, and Exxon itself have been trying, albeit modestly, to expand into the clean energy sector because they see the writing on the wall. We can help speed up this transition by refusing to engage with the extractive sector as it currently operates. At the very least, the hockey industry can stop treating fossil fuel companies like they are charities in need of hand outs. Hockey culture is already known to be a living relic with its overwhelmingly white personnel, its lack of a gay current or former NHL player, and its inaccessible participation costs. Inking the words, “I heart oil and gas” on the ice for the whole world to see confirms for many that hockey is an institution that is out of touch with the world in which we live.