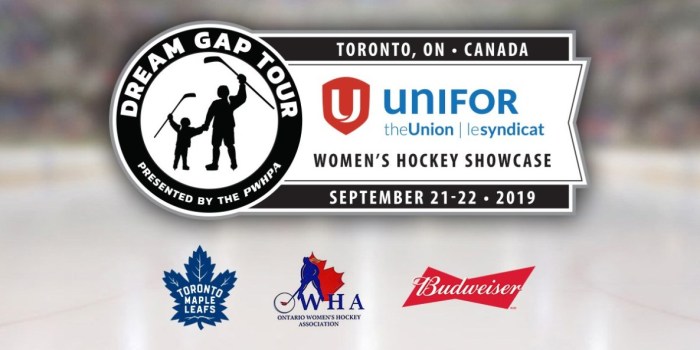 Next weekend the Professional Women’s Hockey Players Association (PWHPA) will kick off its Dream Gap Tour in Toronto, Ontario. The Dream Gap refers to the fact that little boys can dream of being a professional hockey player but little girls have no such equivalent dream to chase.  In the PWHPA’s press release for the tour, Brianne Jenner (who has her Master’s in Public Policy with research focused on child advocacy, so you should listen to her) explains, “Young female hockey players need to see their role models competing and believe that they can dream about being professional hockey players. It’s time to close the Dream Gap.”

Some critics argue that the act of taking time off to try something different may be a hindrance to growth. This could be true, but growth is not necessarily a linear process. So, let’s take a little jaunt down history lane to better understand what a barnstorming tour is and the possibilities offered by them.

Barnstorming sports tours date back to the 1800s. They were an outgrowth of vaudeville shows that travelled to towns that “had no theatres available to entertain its community” (Yep, 2012, p.975). It is referred to as “barnstorming” because these theatrical performances used to literally take place in barns and travel occurred at a frenetic pace. Baseball started its tours in the 1860s and they “were for the purpose of selling baseball to others, or proselytizing, going out on a kind of missionary trip” (Barthel, 2007, p. 8). By the 1880s barnstorming had become normalized in baseball and leagues were being formed. Football joined the barnstorming craze in the 1920s and basketball tours took place during the 30s, with the Harlem Globetrotters as perhaps the most iconic legacy of this type of travelling sports entertainment. Once leagues were established, barnstorming continued as an off-season activity for players to make extra money.

Hockey only has one example of barnstorming from which to draw, and we coincidentally wrote about it back in 2012:

In December 1927 and February 1928, 18 hockey-playing members of the Cree and Ojibway First Nations in northeastern Ontario undertook a celebrated barnstorming tour of 22 cities and towns in Canada and the United States (Holman, 2012, 178).

Sport historian, Andrew Holman, emphasizes the role that the media played in the significance and success of the Cree & Ojibway tour:

The Cree & Ojibway Indian Hockey Tour would have meant much less had it not been for the role that the daily press played in advertising the coming of the tour, reporting the matches and bestowing meaning on them. By the 1920s, sport reports had ceased to be simple, factual, stolid accounts of who played, when and where, and with what result. Hockey and other games were portrayed thickly with drama; they were canvasses on which heroes and villains, favourites and underdogs, authorities, rule breakers, and subversives were cast and recast. Every game was a live stage play just waiting to be invested with meaning. (p.188)

Please do your job. Do your research. Know who the players are. Ask good questions. Tell compelling stories.

The success and/or failure of this Dream Gap Tour is intimately intertwined with the media’s participation or lack thereof. As Holman points out, event re-caps aren’t sufficient, there needs to be a concerted effort to promote the tour as well. The other day I watched a “chef” pour spaghetti sauce on her hotdog as a way to promote the NFL and its opening game on The Today Show. The hosts chatted about the upcoming season before the news. US Open tennis coverage cross-promoted football coverage. NFL football was all over the place; you have to actively avoid knowing anything about the NFL. The main issue with the CWHL was that most Canadians didn’t know what they were missing. They didn’t know there was anything to miss!

Professional football in 1925 was a game largely managed by low-level hustlers looking to make a quick dollar, and it attracted little public interest. It’s franchises were mostly in out-of-the-way towns like Pottsville, Providence, Rock Island, and Green Bay. On a good day, an NFL game would draw a few hundred people; on a bad day, only a few dozen curious spectators gathered along fence lines or rickety bleachers . . .

In the league’s first few seasons, more than twenty franchises folded. Most players held full-time jobs outside of football and had trouble fitting in time to practice….Even coaches sometimes were absent at kickoff, and nearly all the contests had the unorganized feel of a pickup game at the local park or on a pasture like field. Not surprisingly, the press largely ignored the fledgling league. Sometimes there was a paragraph or two of coverage on page three of the sports section, but often there was no mention of NFL action. (Anderson, 2009, p. 6-7)

But people stayed the course because they believed in the product:

In 1934, owners agreed to purchase 100 copies of the first history of the league, Harry A. March’s Pro Football, It’s Up and Downs: A lighthearted approach to the post-graduate game, and distributed them to newspapermen and promoters. League officials deemed the decision to give away the books to be in the “best interest of the league.” Realizing that more needed to be done, in 1935, Spalding Sporting Goods published the first NFL Guide, edited by NFL President Joseph Carr, providing schedules, statistics, and other information about the NFL. Unfortunately, the guide was not profitable and Spalding halted publication after 1936. But in 1937, NFL owners agreed to underwrite half of the publisher’s expenses to ensure its continuation. (Coenen, 2005, p.93)

The more that we (and by we, I mean fans, players, and media etc.) know about the history of how professional leagues actually started we can chip away at all the BS that reporters and social media trolls try to throw at women’s hockey advocates about how the market dictates what it wants. According to the NFL’s website, in 1892, William “Pudge” Heffelfinger was the first paid professional. He was paid $500 for one game…33 years before the NFL was even established. There was no market for football at that time and yet he was paid the equivalent of almost $14,000 in today’s money to play one game.

Men’s professional leagues have fallen, failed, and been revived time and time again but all we see today are 7-8-9 figure contracts and sponsorship deals that supposedly happened because “the market” demanded men’s football, baseball, and basketball. The reality is that the media and owners told the market what they should want and they repeated it until it was a reality. In 1936, the market dictated that people didn’t want to read, learn about, or follow football. The very next year, the institution of football rejected that reality to create a reality that included them. This is what the Dream Gap Tour is about: creating a hockey reality that includes women and girls in equal measure. Whether or not others want to join in this endeavour is another story but history has proven that this method of madness can have very successful outcomes. At least, it has been successful for men’s sports.

The common practice of barnstorming came to an end because leagues felt that it was too difficult to protect their players from injury, it looked bad if a professional team lost to amateurs, and, because as radio and television entered the picture, smaller communities no longer needed travelling entertainment. Still, as the Baseball Hall of Fame writes, “history had already been written. The seeds that grew into America’s National Pastime had been sewn — in part — by the men and women who took baseball around North America for over a century.” If we consider the fact that women’s hockey has been trapped in 1930s Canada for the past 90 years (save for the addition of GIFS) this tour isn’t actually a move backwards, it is the next logical step in the creation of a viable league.

Both Natalie Spooner and Emerance Maschmeyer will be at the Toronto Showcase. Photo by Courtney Szto.

On that note, I would encourage the media to focus less on the manufactured tensions that exist between the NWHL, the PWHPA, and the paths they have chosen. This is not to say that there aren’t probably real tensions but these “tabloid” discussions distract us from the root of the problem. The struggle is not within women’s hockey, it is with the institutionalized sexism that forces women to compete against each other for “limited resources.” The question every media person should be asking is: Why is it that when men’s sports needs a lifeline the entire fleet of the Coast Guard shows up, but when women’s sports puts out the same call we get a couple of do-gooders on a paddle board with a fire extinguisher? Other questions we could be asking: Why has no tv station stepped up to offer coverage of ANY of the Toronto Showcase games when it seemed like every tv station reported the CWHL’s closure? Where is our “Mr. Spalding” to help publish a women’s hockey guide for this tour? Has Tim Horton’s (an official sponsor) tweeted about the showcase? Because they tweeted a Happy Birthday message to Nathan McKinnon on September 1st, featured Shawn Mendes on September 4th, and raised their cups to Bianca Andreescu on September 7th. Why is there a deafening silence from NHL players? I know, I know — Connor Carrick. But let’s be honest, Carrick alone is not the solution to this problem. Why isn’t every single Toronto Maple Leaf re-tweeting the Toronto showcase? Literally. Requires. Zero. Effort. On September 4th when the tickets were released the Leafs only tweeted once that day inviting people to win an autographed Auston Matthews jersey for “back to school.” Considering the Leafs are listed as an official sponsor it doesn’t seem unreasonable to ask for a couple of tweets to the team’s 1.9 million followers. And, if that tweet doesn’t show up until the night of September 19th then shove a microphone in someone’s face and ask them, “Why so late!” Currently, there is more promotion of Adam Sandler on the Leafs September Twitter feed than there is of the Dream Gap Tour. That is the real problem. Tell that story.

Get tickets for the Toronto Showcase HERE.

If you can’t make it in person please consider buying a virtual ticket for a young girl to go instead.

For those of you in the New Hampshire area, get your tickets for the October 5-6 showcase HERE.

One thought on “The Dream Gap Tour: A lesson in barnstorming”