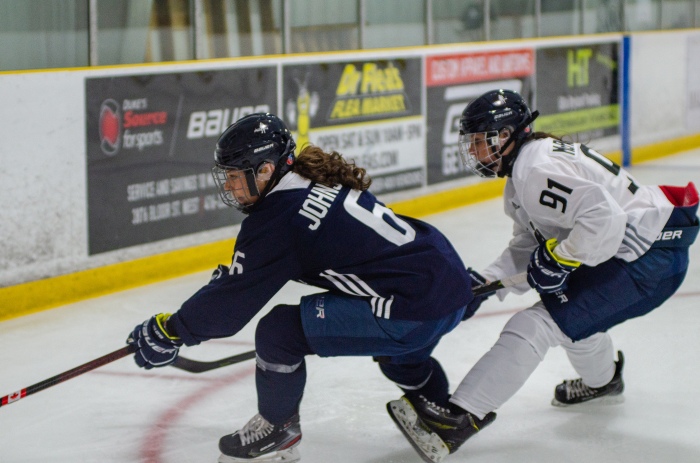 Rebecca Johnston (pictured in blue and captain of Team Johnston) trying to keep the puck away from Jenna McParland (Team Jenner). Photo by Courtney Szto.

“Some women get erased a little at a time, some all at once. Some reappear. Every woman who appears wrestles with the forces that would have her disappear. She struggles with the forces that would tell her story for her, or write her out of the story, the genealogy, the rights of man, the rule of law. The ability to tell your own story, in words or images, is already a victory, already a revolt.”

Hockey is back! Toronto, Ontario was the first stop for the Professional Women’s Hockey Players Association’s (PWHPA) Dream Gap Tour. I didn’t really know what to expect going into this past weekend because there wasn’t a lot of media coverage leading up the event. Ideally we would like see more consistent storytelling leading up to the event and to provide enough lead time to ensure that people who need to travel the games can do so; but, major outlets such as the Globe and Mail, the CBC, and TSN did release articles within a couple of days of the event. We didn’t see a lot of social media amplification except from the players, the PWHPA itself, and the regular women’s hockey circle. Thus, I was pleasantly surprised on Saturday morning when I arrived to a bustling Westwood Arena and packed stands for the first of four games that would be played over the weekend. 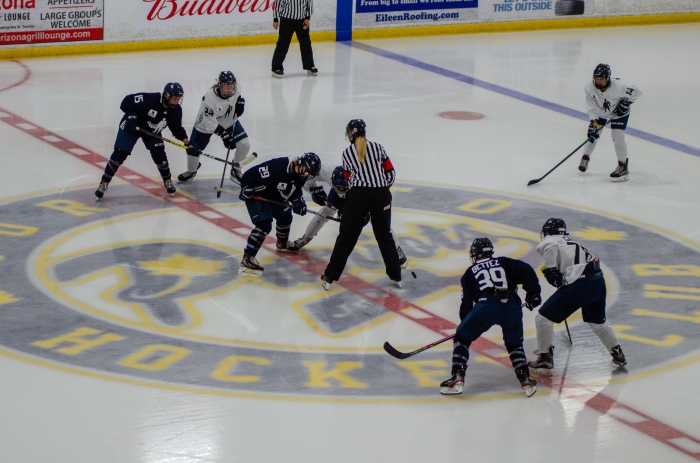 This barnstorming tour is meant to drum up support and interest in women’s hockey by showcasing best-on-best over various weekends around North America. Players were split into four teams loosely resembling the old CWHL rosters from the Toronto Furies (Team Knox), Markham Thunder (Team Jenner), Les Canadiennes de Montréal (Team Poulin), and Calgary Inferno (Team Johnston). There were ceremonial puck drops before each game, three stars were named after every game, and four players went home with Budweiser goal lights as their Player of the Game prizes. It was a LOT of hockey but after the summer that women’s hockey faced it also felt like necessary catharsis for players, volunteers, and fans alike. It was a collective exhale to say: we’re not going anywhere.

It was a little strange holding the showcase at a multi-centre rink because mixed amongst all the celebs and elite women’s hockey players were random parents and kids just trying to get to their own game or practice. On the other hand, the location and community intermingling is also symbolic of where women’s hockey is right now. While having lunch at the pub inside the rink, a woman at the next table over asked our table what the event was. We explained that this was an exhibition to make a case for professional women’s hockey etc. etc. She asked if there were women from Team Canada on the ice. She expressed how impressed she was with the speed and skill of the players and that she had no idea that there was a CWHL or that it had folded. She just assumed that Canada’s best women’s hockey players were taken care of in some way or another. So, the media can continue to focus on the manufactured divide between the NWHL and the PWHPA all it wants but the bottom line is that the hockey community continues to know very little about women’s hockey unless Olympic Rings are attached to it.

Natalie Spooner was greeted by her Battle of the Blades partner, Andrew Poje after her game. Photo by Courtney Szto. 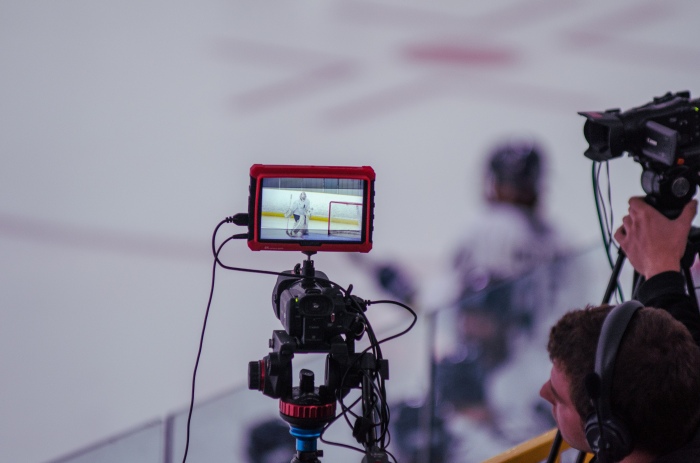 CBCSports.ca streamed all of the games live. Photo by Courtney Szto.

Say what you will about the PWHPA’s decision to run a barnstorming tour rather than spread out to various leagues but there was more media and sponsorship attention for this event than I have ever seen at a CWHL game, save for the All-Star game. CBC Sports streamed all four games with commentary online. Adidas sponsored gear and swag for the players. Budweiser sponsored the “beer garden” and organized a player party. Bauer provided players with helmets, face masks, pants, and gloves. All the PWHPA merchandise basically sold out before the end of the first day.

Sarah Lefort and Tracy-Ann Lavigne from the bench for Team Poulin. Photo by Courtney Szto.

Here’s a replay of Natalie Spooner doing Natalie Spooner-like things but let’s face it, the low budget production value is not good enough to capture what these women are capable of doing on that ice. Also notice that CBC Olympics tweeted this highlight, rather than the CBC Sports account.

Day 2 saw slightly less attendance but the games were still well attended and full of energy. The hockey was fast paced, a little gritty, and fun. Fans got to see the stars do what they do best — make the game look easy — and they were introduced to some others that they might not be as familiar with, like Amanda Makela who demonstrated some lights out goaltending.

The kids are really what make this event. All the little girls (and boys) running around in their jerseys with their teammates asking anyone who even remotely looks like a player for their autograph. One kid mistakenly asked Melodie Daoust twice, but Melo was on her game. Another asked Erin Ambrose for her autograph to which Ambrose replied, “NO!” with a deadpan expression. Then she said, “Of course you can! You were kind of scared there weren’t you.” 😂 Extra marks to Ambrose for keeping the kids on their toes. Watching the players interact with the children is an event unto itself: Knight waved emphatically to little girls through the glass, Maschmeyer chatted with kids by the bench, Lacasse held an infant at the autograph table, Spooner made time for every little one who smiled upwards at their 5″10 idol. My favourite tiny human was the little girl who ran around in a Les Canadiennes hoodie wearing her hockey gloves for the entire Sunday. Most kids lose their mittens within two seconds of putting them on but she wasn’t losing her little Bauer gloves. And, they watch the games. They aren’t just hanging out at the rink — they watch.

Was this the competitive winner-focused hockey that we have come to expect and valorize in Canadian society? No. It was for fun and for the community. Yet, even with nothing on the line but bragging rights, the intensity of the hockey this weekend surpassed many NHL games I’ve watched and/or attended. Still, while we strive to professionalize the women’s game, we should also question why we love NHL hockey so much when it has become (in many ways) the antithesis of fun and for the community. I don’t think I’ve ever been thanked by an NHL player for attending anything, but literally every player I interacted with this weekend thanked me for coming out to support them.

There is a popular saying in the world of international development that every organization from the United Nations to Nike has capitalized on, and it’s the idea that to lift up any society requires empowering and lifting up their women and girls. This logic, when practiced in a vacuum is problematic because it doesn’t make men and boys responsible for the inequitable structures that already exist; and, once again, all of the labour falls on the shoulders of women. However, the intention behind this argument is accurate and simple: when we marginalize and oppress women and girls, we inherently limit the potential of our society.  The same goes for any specific industry. When we treat girls and women’s hockey like a sideshow then we will never really see the growth and impact that hockey can have. For a sport that has found itself at the back of the pack with respect to gender equality, player safety, LGBTQ progress, racial diversity, and class accessibility, one would think that unequivocally supporting women’s hockey seems like a no-brainer because hockey needs women more than women need hockey. 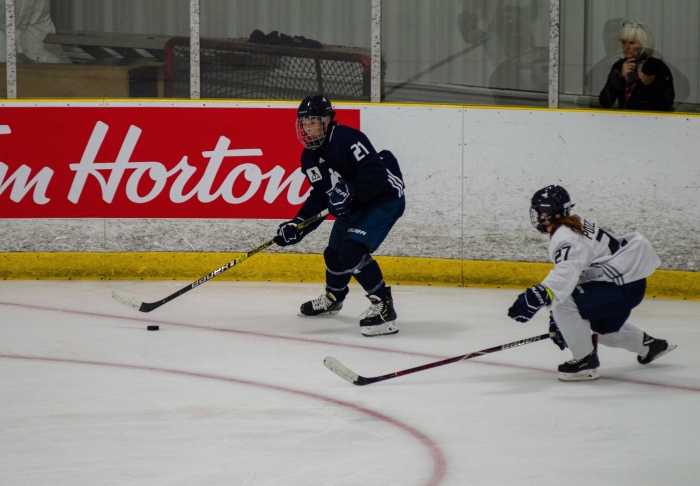 The Dream Gap Tour’s next stop will be in Hudson, New Hampshire on October 5th and 6th, followed by a stop in Chicago on October 19th and 20th [UPDATE: The Chicago showcase is SOLD OUT! Good job Chicago!]. Virtual tickets are available (New Hampshire) for anyone who wants to support but cannot attend the showcase and the games will be steamed on YouTube. Grab your teammates, your neighbours, or just some attractive strangers and get some tickets, so that 20 years from now, when all is right in the world of women’s hockey, you can say you were there when they had nothing but hope and dreams.

Anissa Gamble (Team Knox) in front of a young fan who gained a lot of attention this weekend. Photo by Courtney Szto. 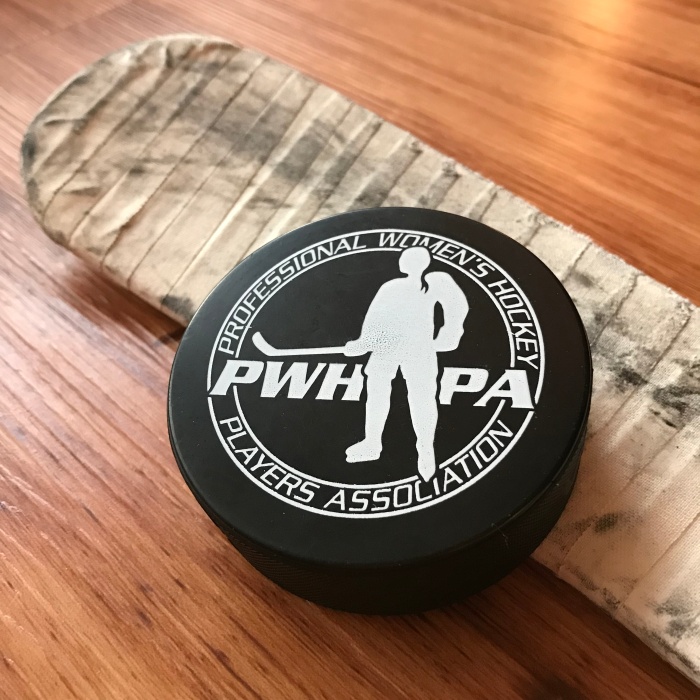