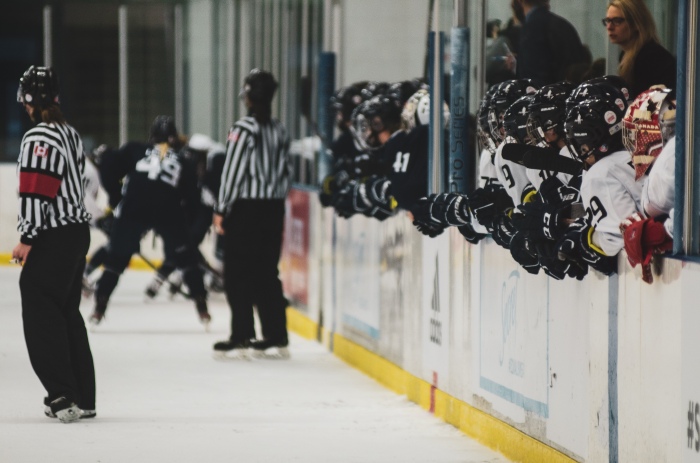 “Labor’s two great weapons in industrial competition are the strike and the boycott.” (Strikes and Boycotts, 1921)

From the moment #ForTheGame was announced on May 2nd, 2019, the term “boycott” was quickly deployed to describe the PWHPA’s actions. Outlets from the National Post to Sportsnet, and Sports Illustrated to The Athletic have all referred to #ForTheGame and the PWHPA as a boycott. However, we need to acknowledge two facts:

Considering the NWHL is the only operational post-university league for elite women in Canada or the United States, it certainly looks like a boycott of the NWHL; but, #ForTheGame also made it clear that if another league were to pop up in either country that even remotely resembles the former CWHL, or another version of the NWHL, they would not play in that option either. We also know that the NWHL could not house all the players from the CWHL, and that moving to the United States is not a reasonable ask for non-national team Canadian players because of visa issues and the inadequate NWHL salaries. Thus, while the act of not playing is in some ways a boycott of the NWHL (and I’m sure it likely is a boycott for certain players), the movement itself also goes beyond a regular boycott. What is most clear from the literature on both strikes and boycotts is that, “Strikes and boycotts are often indistinguishable” (“Strikes and Boycotts”, 1921, p.887). Hence, we find ourselves in this liminal space.

Boycotts and strikes have very fuzzy boundaries. A strike is defined as “a simultaneous cessation of work on the part of workmen,” and they fall into two general classifications, “(1) strikes for immediate needs, like higher wages, shorter hours, better working conditions etc. (2) strikes for the strengthening of the unions…” (“Strikes and Boycotts”, 1921, p. 881). Defining a strike is a difficult task because no industry is the same and historical contexts change. Still, according to Hyman (1972), a strike is generally defined as a “temporary stoppage of work by a group of employees in order to express a grievance or enforce a demand” (p. 17). Aside from the PWHPA not being employees of anyone in particular, the rest of the definition seems to match up.

In 1921, the Harvard Review wrote that boycotts, on the other hand, “are rarely used by labor” (p.885), but they have definitely been connected to labour. In the 1880’s when a spree of labour boycotts overtook New York City, the State Bureau of Labor explained, “The strike is negation. The boycott is action” (Gordon, 1975, p. 84). These were, however, deployed by labourers after they found their strikes to be ineffective; hence, “unions attempted to prevent the sale of products, not their manufacture” (original emphasis, Gordon, 1975, p. 186). The boycotts usually accompanied labour strikes but the boycotts were more appealing to the workers because they “found it a cheaper alternative to costly strikes” (Gordon, 1975, p. 187). The origin of the term boycott stems from the social and economic isolation forced upon Captain Charles Boycott, a crappy Irish landlord, by his tenants. Gordon (1975) writes, “The term ‘labor boycott’ was indeed derived from Irish Land League boycotts against recalcitrant landlords which began in late 1880” (p. 187). The point was to cause economic harm to Captain Boycott and other similar “unscrupulous employers” (Gordon, 1975, p. 187).

One could argue that the original intent of the PWHPA and #ForTheGame was for the NWHL to fold under social and economic isolation, but it clearly didn’t work. The NWHL, to its credit, is alive and well. So a “failed” boycott it might be but, again, the PWHPA leaves room for the refusal of labour to any similar league. Therefore, while the NWHL is certainly affected by this withholding of labour, it is not the sole target because rectifying inequitable conditions more broadly is the stated end game. Additionally, strikes are costly to the workers because of lost wages, which might be the most important aspect of #ForTheGame — it is more costly to the players to not play than anyone else.

The language of labour always seems to disintegrate when applied to sports. For all intents and purposes, the NCAA, NHL, MLB, NBA, and NFL are all cartels unencumbered by the regulatory laws that apply to basically every other industry. They have no competition and nor do they allow competition to freely enter the market. We would normally call these monopolies but because its sports, we call them leagues. This may explain why, in 2017 when the USWNT threatened to not participate in the World Championships with the goal of achieving better all-around compensation and support for girls hockey, it was referred to as both a “boycott” and a “strike” by the media. In this 2010 ESPN list of “sporting boycotts” it includes the 1972 Grand Prix drivers’ strike led by Niki Lauda and refers to it as that: a strike. Boycotts in sports also tend to be more time contained than strikes. The USWNT was very targeted at the World Championships, as were the 1980 and 1984 Olympic boycotts. #ForTheGame proposed a time frame of “this season,” yet when we listen to PWHPA members today they often talk about the Dream Gap Tour potentially lasting years until they receive the league that they envision. As Marie-Philip Poulin told the National Post at the end of 2019, “There is light, [but] it might be further away than we thought.”

1964 – South Africa is banned from the Tokyo Olympics over apartheid. Photo from BT.com.

I asked Nathan Kalman-Lamb, a professor who focuses on labour and sports (among other things) from Duke University, for his take on the PWHPA’s actions. According to Kalman-Lamb, boycotts refer to a “refusal to engage in any kind of economic activity,” and this could include activities such as trade, travel, consumption, or labour. They are generally used to force changes to non-labour issues or for the labour of other people. For example, when consumers were encouraged to boycott Nike because of sweatshop labour conditions, that was a boycott to encourage Nike to change its labour conditions but it was not carried out by the workers themselves.

It does feel like a sort of strike, in that the crux of the issue is to have some say over the means of production, as it were. Indeed, the Dream Gap Tour is a sort of manifestation of the radical desire to seize the means and control the commodity spectacle they are producing. In that way, it is fundamentally a labour action beyond the logic of unionization and collective bargaining.

Again, the main asterisk for the PWHPA is that they have no employer and are therefore not union, but they are athletic labourers expressing a grievance. What may also signal that #ForTheGame is closer to a strike than a boycott is that the public generally finds labour strikes distasteful. Public opinion often finds strikes unnecessary and/or irrational. Some of the ire that the PWHPA has drawn is that the players are simply being greedy (but no one goes into women’s team sports to rake in the dough) or that their method is nonsensical because these efforts could be better used to draw sponsorships and partnerships to the NWHL. Still, we know that the greatest advances in work conditions tend to happen because of social disruption caused by nurses, teachers, garbage collectors and other union groups when it affects the broader public. We are made to take notice.

Perhaps, the most accurate statement would be to refer to #ForTheGame as some sort of industrial action, which encompasses various ways that workers can challenge their work conditions and includes strikes, boycotts, overtime bans, go-slows, work to rule, and sit-ins. Industrial actions, like protests, are supposed to be disruptive and it is the disruption that makes folks uncomfortable. Similar to how protests are meant to expedite social progress, industrial action seeks to accelerate workplace progress. As an analogy, young Greta Thunberg is causing a political ruckus in the hopes of accelerating a social and cultural shift towards a more sustainable future. Not everyone agrees with her methods because, not only is she calling for progress, she is also calling for a paradigm shift. The PWHPA is also calling for a paradigm shift, and that is what really puts #ForTheGame into a space of its own. We’ve tried the status quo and we are still marching towards a climate catastrophe. We’ve tried the status quo and the NWHL is still unable to offer wages that will sustain an athlete on hockey alone. It’s not so much that the NWHL isn’t on the right track, it’s more that women’s hockey is so far behind the other major women’s team sports that it needs a defibrillator jolt to even play catch up. Enter the PWHPA.

Personally, I think the existence of both groups helps each other because while the PWHPA can point to the NWHL as a living example of not yet having the resources befitting of elite athletes, the NWHL proves that people are willing to watch women’s club hockey when enough elbow grease is added. Defibrillators don’t work every time on everyone but first aid 101 teaches us that it’s worth a shot. Whether you think the PWHPA “deserves” or has “earned” such a right to demand this kind of change is your opinion to have, but their purpose is quite simple: a drastic measure to create drastic change. If the definition of insanity is doing the same thing over and over again and expecting different results, then sanity becomes framed as counter normative.

Here’s the undeniable fact about those who campaign for drastic change — they push the needle further for everyone, one way or the other. Donald Trump and Alexandria Ocasio-Cortez exist at opposite ends of the political spectrum but both of them have pushed the needle for the self-identified moderates in their respective parties. When someone shows up with an “outlandish” agenda everyone else is forced to react whether they like it or not, and the NWHL did react when the PWHPA arrived on the scene. The 50-50 revenue split, longer season, and increased per diems and salaries announced by the NWHL on May 23rd were arguably all a reaction to the #ForTheGame announcement on May 2nd and the formation of the PWHPA on May 20th.

Whether one believes this is a strike or a boycott may depend on which aspects of #ForTheGame they want to (de)emphasize, and/or if they see themselves siding with labour or capital. But I think only referring to it as a boycott undercuts the mission of the PWHPA and #ForTheGame. At this point, it is both a boycott and a strike, and neither a boycott nor a strike. It is an unprecedented stand for gender equality against inequitable labour conditions in a landscape that happens to include the NWHL. Maybe the label we’ve been looking for has been staring at us in the face this whole time: #ForTheGame.

One thought on “Boycott? Strike? What exactly is the PWHPA doing?”