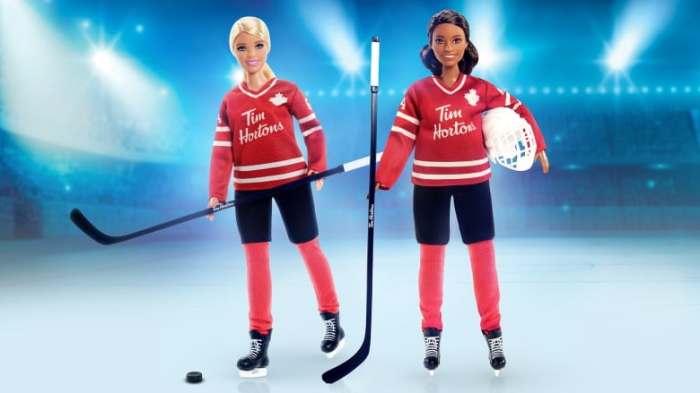 Last year, Tim Horton’s worked with the toy conglomerate, Mattel, to roll out “a hockey-themed Barbie as part of a charitable initiative aimed at getting girls involved in the sport.” There was only supposed to be one doll — a white doll. But, in light of…realization that racism is still a thing, Tim Horton’s asked Mattel to “rush the production of a Black version of the Barbie doll.” There’s a lot going on in this story so let’s unpack this dollhouse.

First, Barbie’s full name is apparently Barbara Millicent Roberts. Ms. Roberts turned 61 this year and she was independent for two whole years until Ken came along and became a distraction (#MilburyBurn). Barbie continues to be the most popular “fashion doll” ever produced in the United States, with two dolls sold every second in the world (WHAT? IS THIS TRUE?). Ever the career woman, she has had over 200 vocations in her 61 years including astronaut, firefighter, journalist, and, in 1992, Barbie took a run at President. I guess now we can add rink rat to that list.

In 2001, Bratz dolls started to give Barbie a run for her money. Bratz dolls are supposed to be a re-interpretation of dolls for pre-teen girls and a response to debates “among parents, educators, and researchers about the effects these products have on children’s understandings of gender, race, and sexuality” (Becker, Thomas & Cope, 2016, p.1219). Girlhood has long been a subject of study in the academy and popular culture represents one of those industries that is “perniciously effective in regard to [the] undoing of feminism, while simultaneously appearing to be engaging in a well-informed and even well-intended response to feminism” (McRobbie, 2004, p.255). Becker et al. (2016) argue that children’s media products commonly “reproduce inequality by leaning on racial/ethnic stereotypes, erasing the significance of race in shaping people’s experiences, or representing boys more often in a wider range of roles” (p.1221). Enter hockey Barbie.

Yes, there will be white and Black hockey Barbie dolls available, eventually. The Black doll is only being produced as a reaction to the reinvigorated wave of Black Lives Matter protests, despite the fact that the first Black Barbie was produced in 1980. In 1990, Mattel announced that it would “go ethnic” by launching Hispanic and Asian dolls…as if white isn’t an ethnicity unto itself. This is what white privilege looks like. It’s not a conscious desire to exclude BIPOC representation or presence, rather it is the unconscious practice of assuming that whiteness is the universal reference point. The white doll is for everyone! So, Tim Horton’s has decided to delay it’s rollout of the doll until both dolls are available.

Aside from the lack of racial diversity in children’s toys, surely a Barbie who plays hockey should be a celebration of expanding gender norms for girls, right? Yes and no. Hockey in Society guest contributor, Dr. Kelley Lee-Gilmore emailed me about these Barbies with a very short message:

Doesn’t look like any hockey player I know. Where are the shin pads? Trying to support female hockey by supporting a body image that is not biologically possible. Hated what Barbie did to my psyche growing up.

To Dr. Lee-Gilmore’s point, the 11-inch doll has received consistent criticism over the years of promoting an unhealthy body image for young girls. To scale, Barbie would stand 5-foot-9-inches tall, have a 39″ bust, an 18″ waist, 33″ hips and wear a size 3 shoe! She would weigh approximately 110 lbs. If you need a live woman for comparison, actress Margot Robbie’s measurements are reported to be 34-24-34 with a size 7 foot. We dismiss toys as trivial but as Ducille (1994) suggests, “toys and games play crucial roles in helping children determine what is valuable in and around them. Dolls in particular invite children to replicate them, to imagine themselves in their dolls’ images.” In 2006, Dittmar, Halliwell and Ive conducted a psychological study with 162 girls aged 5-8 where they were exposed to Barbie dolls and Emme dolls (supposedly more representative of the average woman’s body), or no dolls. The girls who were exposed to the Barbie dolls reported lower body satisfaction and a “greater desire for a thinner body shape.” These aspirational effects seemed to diminish or decrease with the older girls but the observations suggest that early exposure to these body ideals is problematic.

Barbie continuing to be reinvented but with a consistent physique. Photo by Mattel.

So, does putting a hockey stick in Barbie’s, probably freakishly small/big hands in comparison to her body, make this a counter normative Barbie? Maybe even a feminist Barbie? Is what Barbie doing more important than how Barbie looks? Or as Sherrie Inness posed in her edited collection, Action Chicks: New images of tough women in popular culture, “Do these characters afford a more powerful vision of womanhood than that afforded to women by media in the past? Or are they merely the newest trend in beautiful women fighting crime…doing little to challenge or question gender stereotypes?” (p.14). Inness explains that Barbie teaches little girls to worry about shopping, whereas G.I. Joe encourages little boys to worry about terrorism. The latter seems problematic in its own right but Inness also points out that children are able to subvert dominant narratives with their imaginations; thus, while toys can be instructive and reproductive, they are far from prescriptive. In this light, maybe hockey Barbie is exactly what little girls need in 2020.

Personally, as someone who grew up never enticed by dolls, I want one of these Barbies. I had dolls when I was a kid — people would gift them to me 🙄 — but I didn’t want to play with them. To Inness’ point, I think I recognized at a young age that I didn’t see myself in those dolls because of what they were or weren’t supposed to do. Keep in mind that dolls are gendered for girls and “action figures” are gendered for boys, illustrating that the toys marketed to girls have typically been passive objects but the ones for boys are supposed to be active characters. Doll play, for girls, is supposed to “[involve] sitting still, in a domestic venue, dressing the doll in various purchased outfits and grooming their hair” (Collins et al., 2012, p.107). Young Courtney said nuts to that. In Collins et al.’s (2012) study where they had a workshop for girls to reimagine Barbie, some girls would envision Barbie as a career woman who has it all, while others:

reported ingenious ways of destroying Barbie: Barbie would “bungee jump and die”; or she would be “throw off a top bunk,” “dissected,” or “jumped on”; or she would have “her head torn off to us as Halloween decorations.” Others coyly noted the damage they had secretly inflicted on Barbie, biting off her feet or discovering that “plastic hair burns easily.” (p.113)

Thus, the doll itself does not determine “girly” play. The notion of perfection was a consistent theme with the study participants and they recognized that Barbie’s physicality was not in fact normal for women. When asked to reinvent Barbie into their own vision through both race and purpose, some of the reimagined Barbies included “Mother Earth Barbie”; “Lady India”; “Save the World Barbie,” and “Real World Person Barbie.” Collins et al. (2012) argue “the challenge for feminism is to imagine and create new and more joyful ways for women and girls to live as embodied persons” (p.106). With the long resume that Barbie has crafted for herself, she is supposed to signal that little girls can and should be able to do whatever they desire. Hockey Barbie is definitely late to the party but “Professional Hockey Player Barbie” has a good ring to it and may prove to be a useful symbol in the continuing fight for professional women’s opportunities that pay a living wage.

While Barbie’s physical dimensions remain problematic and still need to be challenged, the fact that Barbie has taken up hockey represents a challenge to the passive Barbie that many of us had as children. I imagine young children running around the rink with their Natalie Spooner or Sarah Nurse Barbies scoring ridiculous breakaway goals and bodychecking their friend’s dolls, or Crosby “action figure,” into the boards. At least, that’s how I would (and will) play with my hockey Barbie. Barbie will definitely need to have her hair brushed after her powerskating lessons. Who knows how those will go with those tiny feet. I guess hockey Barbie is a feminist Barbie if that’s what you want her to be?

Ducille, A. (1994). Dyes and dolls: Multicultural Barbie and the merchandising of difference. Differences: A Journal of Feminist Cultural Studies, 6(1), 46+.