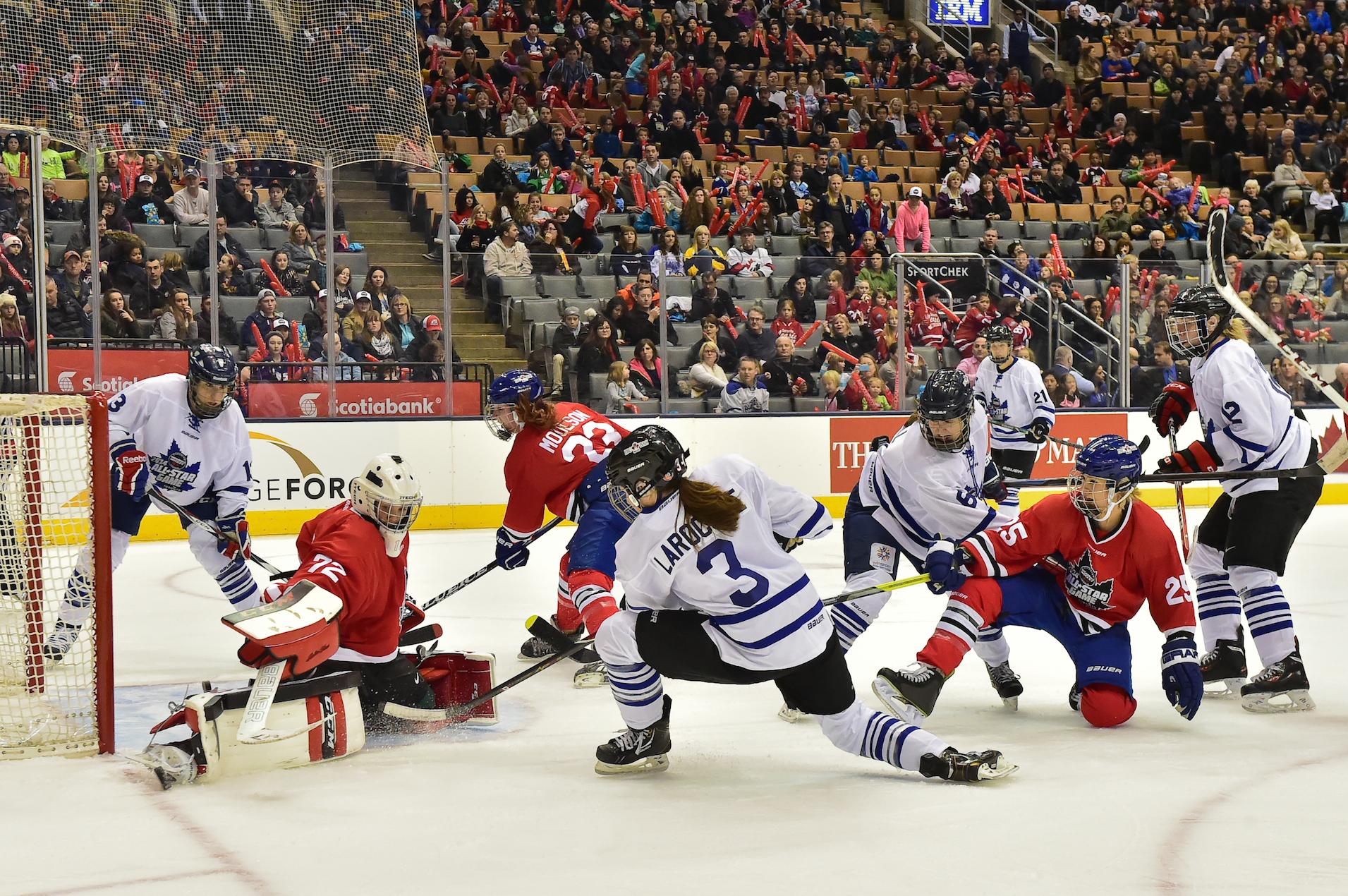 “Hello Canada and hockey fans in the United States and Newfoundland” goes the saying by legendary commentator Foster Hewitt, whose name is engraved on the broadcast booth of the Air Canada Centre in Toronto. In order for this article to be written, I am grateful to the Canadian Women’s Hockey League media coordinator Kristen Lipscombe for allowing me to sit in the press box as well as inviting me to the all-star draft party (a private function) the night before.

It is certainly easier to record observations high up in the 600-level press box section, where I could jot down notes frequently without facing the scorn of fellow fans for staring at my portable electronic device instead of making noise. There was also a television that showed Sportsnet One’s live broadcast next to me. Overall, when I write reviews of events, I try to document minor details that many people don’t already know and can’t find anywhere else. These details may be trivial, but they offer insight into many broader themes.

I strongly believe in making my research accessible to academics across different disciplines and I also want to present it in a way that won’t be easily dismissed by influential policymakers and the general non-academic audience. One problem I have observed in academia is that some experts travel to conferences only to engage with a small handful of other experts who already know and agree with existing challenges. Sometimes the dialogue in academia becomes very theoretical and ideological to the point where some of these experts already know their results before beginning their observations.

Before going to the CWHL All-Star Game, I consulted with several professors (including Margaret MacNeill, who did her PhD dissertation on the production of men’s hockey at the 1988 Calgary Olympics) and graduate students about potential issues to look out for and the refreshingly prevailing response was, “There are many, so go in with an open mind.” As stated in a previous article about objectivity, I won’t pretend to be non-ideological and apolitical in my writing or actions. Even though I dressed formally while covering this event instead of donning a Natalie Spooner t-shirt that I had just purchased on the online store, I won’t deny that I want to facilitate increasing equity in sport through the promotion of women’s hockey.

I widely shared the event information and five friends attended the all-star game. These friends range from a newcomer to Canada with little knowledge of hockey to a sport concussion expert who was sometimes the only person, let alone goalie, to attend female drop-in hockey sessions at the University of Toronto Varsity Arena last year. My friend enthusiastically told me that the average number of players has since increased to four, which is some progress, but there is the potential for much more progress.

Similar to my friend’s celebration that the equipment manager is not the only person to shoot on her at the Varsity Arena, the CWHL this past weekend found joy in celebrating rather modest successes with optimism for further growth. At the draft party, Cassie Campbell delivered a speech about the evolution of women’s hockey: Bauer is currently the sponsored supplier of CWHL hockey equipment while in the 1960s, the Pembroke Pandas women’s hockey team sold hockey rulebook sheets at men’s varsity games to raise money for hockey equipment. Campbell also pointed out that CWHL players now fly to more destinations instead of taking the bus.

During the actual draft, where team captains (pre-selected by fan polling) each pick five players before the rest of the players are randomly selected by randomly drawing sticks from a pile, the first two picks were CWHL co-founders Lisa-Marie Breton and Sami Jo Small. Both of them received a standing ovation from the delegates, as everyone knew their prominence in the development of the league throughout the past seven years. While it was an incredible honour to attend the draft party, I acknowledge my presence as an outsider with relatively limited knowledge of the CWHL. I only recognized the names of half the all-star players, Cassie Campbell, Commissioner Brenda Andress, and former Mississauga mayor and hockey player Hazel McCallion; and none of them knew me.

The CWHL community off the ice is very tightknit due to the fact that players, staff, and journalists accredited with the CWHL often have other career affiliations and voluntarily devote their time to help the league. Because players often have full-time work schedules aside from hockey, CWHL physician Laura Cruz states that veteran athletes are more philosophical about their long-term health and post-hockey career when they suffer concussions and other serious injuries. Nevertheless, this does not translate into a more cautious game. At NHL all-star games, it is common to see players skate at less than half their effort or skip the event altogether to avoid injury for a game that does not count for points in the league standings.

The CWHL All-Star Game on Saturday was much more meaningful and competitive, with perhaps more defensive backchecking in the first period than all of the NHL all-star games in the past decade combined. Defence does not necessarily equate to boredom, as in the CWHL All-Star Game, the pace was still fast and the players generated numerous offensive rushes that led to scoring chances and goals. Down by a goal late in the third period and on the power play, Team White even pulled its goalie and mounted incredible pressure on Team Red. Although Team White did not score, desperate hockey is the brand of hockey that the general public would most likely pay to watch.

Sandwiched between the quarterfinal of a darts tournament and bobsledding on the Sportsnet One broadcast schedule, these female hockey players realized that the best way to generate interest in the limited spotlight given to them was not to stand at centre ice waiting for breakaway passes that defenders wouldn’t try to stop, but to showcase their all-round hockey sense by playing a competitive game. During commercial breaks which intriguingly featured ads for male-targeted Philips razors and Don Cherry’s Rock’em Sock’em video sets, the players lightened up and joined the slow-motion wave that the crowd of 6850 was doing.

Out of the over-12,000 reserved tickets for this free event, this turnout is another modest success that the CWHL proudly celebrates. The audience is not only made up of girls’ hockey teams and their families even though many lower bowl seats have been reserved for them, but there is a noticeable amount of diversity in age and gender from a plain observation. In terms of the people in the press gallery, the vast majority is male. I’m not saying it’s bad to have informed reporters such as Rob Del Mundo and Mark Staffieri ask professional questions and genuinely care about the status of the women’s game, but it is necessary to have more women shift the often-male prevalent profession of hockey reporting in CWHL and NHL games.

Nevertheless, if there is going to be male involvement, I like the fact that public address announcer Andy Frost showed up and treated the CWHL All-Star Game in the same professionalized way as a Toronto Maple Leafs game. Then again, the entire event is actually a Maple Leaf Sports and Entertainment (MLSE) production, from emails with a “Leafs Nation” banner to the event page located on the Leafs website to repeated mentions of “your Toronto Maple Leafs proudly present the CWHL All-Star Game.” Aside from doing the wave, several fan contests took place during commercial breaks, with prizes featuring autographed jerseys from Morgan Rielly, Jake Gardiner, Jonathan Bernier, Joffrey Lupul, and Nazem Kadri.

During the first intermission, the Jumbotron screens showed Leafs highlights instead of Sportsnet’s live interview with Cassie Campbell and Brenda Andress. Overall, I give Rogers Sportsnet credit for increasing women’s hockey coverage, even if the position of the CWHL on its website is buried in the “More Sports” category with bobsledding (not to de-emphasize the accomplishments of Lou Marsh Trophy winner Kaillie Humphries) and the 20-minute skills competition portion of Saturday’s event was not televised to cut to bobsledding.

The 1961 winner of the Lou Marsh Trophy, Bruce Kidd, has described facilities such as the Air Canada Centre “men’s cultural centres” for catering to professional sports that glorify and reinforce the power of males. There are honoured jersey numbers of Leafs players, murals of Raptors players, an extensive dedication to Foster Hewitt in the broadcast booth, and a “Legends Row” that illuminates “great men that Leafs Nation was built on.” Similar to my note on male reporters above, I think these men are excellent people who have contributed significantly to the cultural sporting history of Toronto. Nevertheless, I think that there should be more diversity in and around the Air Canada Centre so that all visitors can see a broader range of “heroes.”

In light of the #BeTheHero campaign, Boston Blades coach Digit Murphy (who also handed out business cards of her organization to reporters in the post-game media scrum) discussed how CWHL players function as “wholesome” role models to both males and females, referencing other professional men’s sports plagued with off-field violence. Murphy explained that some CWHL players balance Ivy League academics or full-time medical jobs with hockey to make a living, and that everyone can learn from them. While this statement and all of the celebrations from the CWHL for its modest successes are admirable, the end goal should be loftier.

In order to advance as a “professional” league, players should not have to work at other full-time jobs in order to make money. Of course this requires greater financial revenue, and I hope that my purchase of a Natalie Spooner t-shirt can aid that cause. It is much easier for MLSE to take greater control though. If MLSE is serious about incorporating the Toronto Furies into “Leafs Nation” beyond once-a-year all-star games, it should make the Toronto Furies brand more accessible at the Air Canada Centre during Leafs games by selling their apparel at the flagship Real Sports store and more noticeable by potentially adding female hockey players on Legends Row. A future study could focus on the extent to which the Toronto Furies are featured at the Air Canada Centre, but I shouldn’t jump to conclusions based on assumptions and I might have to be invited to watch a Toronto Maple Leafs game from the press box to find out.

8 thoughts on “Beyond the Foster Hewitt Media Gondola: A Review of the CWHL All-Star Game”