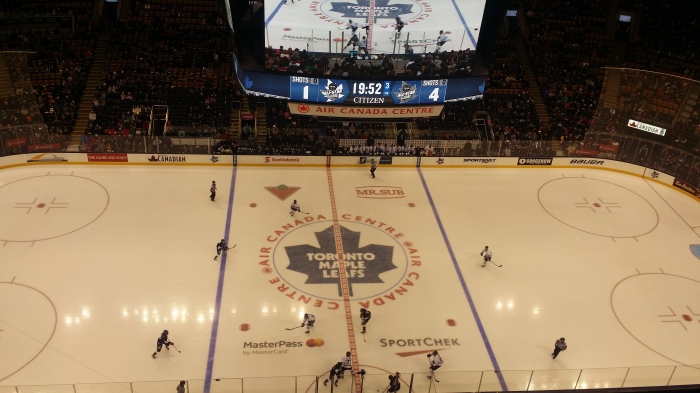 “Teams descend on the Air Canada Centre in Toronto, the biggest stage of hockey.”

This quote came from a World Cup of Hockey advertisement on the jumbotron but many similar messages came from the players and the organizers of the CWHL All-Star Game, held for the second consecutive season in Toronto. I’ve written an article about the inaugural CWHL all-star game, and it was a pleasure to sit in the Foster Hewitt Media Gondola again to offer a comparison between this year’s event and last year’s event.

I sat right below Sportsnet commentators, so I could hear John Bartlett, Cassie Campbell, and Jennifer Botterill describe the game as I’m watching it myself. To my right was Avry Lewis-McDougall and to my left was veteran reporter Mike Brophy. There were far more reporters in the press box this year (a substantial increase in female journalists too) and the CWHL reports that 22 private boxes were rented out this year (compared to none last year). The CWHL claims to have sold around 4000 tickets for $10 and given away 1400 more. Since a bit more than half of the lower bowl was filled, I’d say this is an honest answer.

Many fans in attendance were young children, and Commissioner Brenda Andress markets the CWHL as “family entertainment” that promotes positive role models and life values beyond hockey. In the post-game scrum, Andress conceded that playing hockey at a high level is temporary – whether it’s the CWHL or the NHL – and that the CWHL has a plan to set up its players with opportunities after they retire through strategic networking initiatives with female leaders in various capacities beyond hockey. This remark reminds me of Dr. Laura Cruz’s comments last year about female players who are more philosophical about their injuries due to the absence of a real salary.

On the television screens in the press box to my left and to my right were male professional athletes who make millions of dollars. Instead of showcasing the CWHL All-Star game live, Sportsnet aired the Vancouver Canucks vs. Pittsburgh Penguins game on one channel and the Barclays Premier League on another channel. Although I have followed my former hometown Canucks since the Mark Messier years, I think that Sportsnet could have locally televised that game and instead shown one of the premier women’s hockey events on the calendar on live television. From a post about the Women’s Outdoor Classic on the Stanley Cup of Chowder blog, it’s not good enough to say “it’s better than nothing” regarding the disparity in media coverage.

Nonetheless, promotion of the CWHL All-Star Game was successful enough to attract tens of thousands of votes to determine the captains of each team. A teacher colleague campaigned daily on social media for his good friend Sena Suzuki, the only non-North American all-star, to be captain. As someone associated with multicultural sport policy, I visualize sport in international terms (going beyond epic Canada vs USA matches). I welcome diversity in sport, as seen in Courtney Szto’s last post (more about myself can be found on the Passages Canada website).

It is encouraging to see that one of my students, a second-generation Tamil-Canadian, wants to join her high school male baseball team to pursue her interests when the only female equivalent at her school is softball. However, I would be cautious with this analogy for female ice hockey players, as one common misconception of CWHL’s mission is to rival the skill levels of male NHL players. Nonetheless, I would argue that the dedication of CWHL players to hockey exceeds the dedication of NHL players, as many of them continue to hold full-time jobs while training and playing elite-level hockey without proper compensation.

As with last year’s event, I was impressed by the meaningful approach to the game. Despite the 5-1 final score, the game was much closer than it appeared (too bad the shot counter didn’t work, as it would have shown an even distribution of shots and chances). Both sides had offensive chances, but there was no shortage of defensive plays that made the game flow. Although I have written about blocking shots and still question why commentators criticize players for fighting in a lopsided game (not that I condone fighting) yet praise players who block shots in the very next play, through this logic, it is admirable to see defenders sprawl out in the last ten seconds of the third period to break up a play.

Intriguingly, many players in the post-game interviews noted that this game was taken lightly. But if this high calibre of hockey is considered light, what is considered heavy? I think this rhetorical question can be answered by merely watching more CWHL games. It is encouraging to see that Brian Burke and Doug Gilmour, among others associated with the NHL, showed up to the event. Last year, I raised the issue of having a stronger, more accessible brand for the CWHL teams.

With the rebranding of the Montréal Stars to les Canadiennes de Montréal and the incorporation of a leaf in the Toronto Furies’ new uniforms, there is a visibly stronger partnership with the NHL teams in these cities. While the Maple Leafs still “proudly present” this year’s CWHL All-Star Game, promotion of the Leafs was much more subtle than last season. Rather than giving away Leafs’ uniforms, fans won autographed helmets and CWHL All-Star jerseys. I’m impressed that Real Sports has stocked up on CWHL merchandise, though the long-term availability outside of its website needs to be evaluated again in a few weeks.

If there’s one unresolved suggestion from last year’s article which seems timely, it’s the Legends Row. The CWHL All-Star Game took place a few hours before three “legends” were honoured in the NHL game between the Toronto Maple Leafs and the Montréal Canadiens. Hopefully, having female players on Legends Row isn’t a distant afterthought that emerged from my views from the 6th floor in these back-to-back seasons.