Last week I attended The Hockey Conference in Fredericton, New Brunswick. This conference only takes place every other year and attempts to bring together hockey enthusiasts of all kinds. We had everything from academics to coaches, and former NHL players to a Canadian paralympian in attendance. As a critical academic, it is both exciting and nerve-wracking  to present to practitioners in the audience. On the one hand, you want people working in the field to hear your research and hopefully implement some of the changes you suggest or at least look to make their own changes. On the other, there is the very real option that your research can fall on deaf ears. 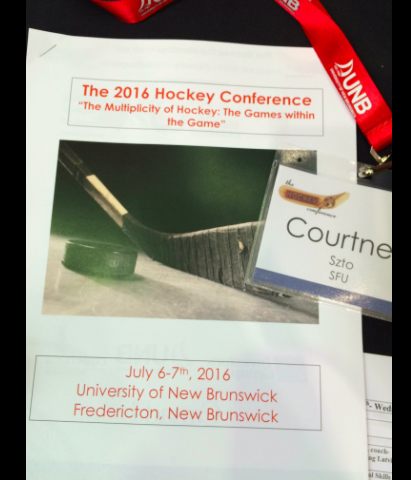 I research race in hockey and if you are a regular reader of this blog, or have working eyesight, you know that hockey continues to be a white man’s sport, especially at the elite levels. As a member of the North American Society for the Sociology of Sport, I have gotten used to a very diverse group of conference attendees and race is a guaranteed subject on the docket for many at the annual conferences. However, when I venture into Canadian only/Canadian dominant sport conferences the landscape changes drastically. Last year, I attended a Sport Canada conference and wrote about how sparse the discussion about race was.  Then, at last week’s Hockey Conference I ran into the same issue. I was one of a sprinkling of people of colour in attendance and I was the only person presenting on race in hockey during the two-day conference. With that said, the conference itself had arranged to have Ted Nolan speak about his experiences as an Aboriginal man in hockey (and he did so eloquently), and there was also a panel on the Aboriginal contributions to the early game of hockey in Canada. Still, with the papers presented during the concurrent sessions I was the only one talking about the elephant in the room/rink. So how multicultural is Canada in 2016? I mean really.

The first presentation in my session was about Quebec “nationalism” during the Eric Lindros draft saga. I then presented some preliminary findings from my ongoing research project on South Asian experiences in ice hockey. Most of my presentation was focused on the kind of racial slurs that players receive on the ice and how they are largely internalized as normal “hockey chirping.” I also talked a little bit about the HNIC Punjabi broadcast. After me, a colleague presented on Don Cherry and the normalization of Canadian militarism. I received a couple of simple questions during the Q&A portion but the majority of discussion was focused on the Don Cherry presentation. As I listened to the discussion about Don Cherry and his role in perpetuating a particular type of Canadian nationalism and masculinity unfold I thought to myself, “Does no one have any questions about what else my research participants had to say?”  I basically threw Canadian multiculturalism under the bus exposing the fact that racism is consistent for people of colour going through the game and that hockey is not the inherent unifier that we like to believe it is, but no one wanted to talk about that. We apparently have nothing to say about racism in hockey, either positive or negative.

And then I realized. I just presented to a room of approximately 40 people of which there were only four people of colour (including myself). Either the room had nothing to contribute to the conversation on race because the discussion was outside their wheelhouses OR they did not feel comfortable engaging in a public discussion about race with people of colour present.  Of course there is the other option that my presentation just wasn’t very good and didn’t warrant any discussion (believe me, I have listened to some bad presentations before and the only question I had at the end was WHAT?). But given that I was presenting original research, with unique findings, I find it intriguing that a bunch of hockey lovers didn’t have anything to say about racism/discrimination in hockey. And if nothing else, considering the amount of buzz the HNIC Punjabi team received during the 2016 playoffs no one even asked me about the guys on the broadcast.

This reflection piece is not meant to call out anyone at the conference, rather it is an open call for all of us to put race as an issue on the table for discussion. We need people researching race on hockey IN CANADA, and this scholarship should not just come from academics of colour. I saw men presenting about women’s hockey at the conference, heterosexually identified people presenting on issues of homophobia in hockey, and we played sledge hockey as able-bodied people. It is not only okay to cross identity lines, it is necessary.

Me playing sledge hockey for the first time in my Heisenberg jersey, shorts, and GoPro.

When Ted Nolan gave his keynote speech about playing hockey as an Aboriginal person he started to well-up with emotion talking about “being different.” It was a telling moment from someone “who made it.” And, when Cheryl Maloney and Gerald Gloade presented the Mi’kmaq contributions to the hockey stick and puck as we know it today, they were asking us to broaden our understanding of hockey and realize that the dominant narrative isn’t the same as a complete narrative. We have been taught for too long to either pretend as if we do not see colour, or see it as a non-issue. If watching American politics unfold south of the border hasn’t given us an appropriate entry point to discuss our own racial tensions then I fear for our future.

Towards the end of my presentation I talked about how my own research participants have been reluctant to use the word “racism,” so this critique is not only meant to flag the attention of white readers. My participants often refer to racism as “bias” or “that” but, as good Canadians do, the word racism has only been used sparingly, as if to not use up the quota on the word. It is a difficult subject to broach but a conversation that must be had.

So how do we start the conversation?

One of my research participants told me that no one had ever asked her what it was like being a South Asian hockey player until I interviewed her, and that none of her coaches had asked her if she was okay with the names that her teammates would call her. So as a coach, player, and/or administrator this is probably the easiest way to venture into this unknown territory: ask someone how they feel about being a “visible minority” in the game. Then listen.