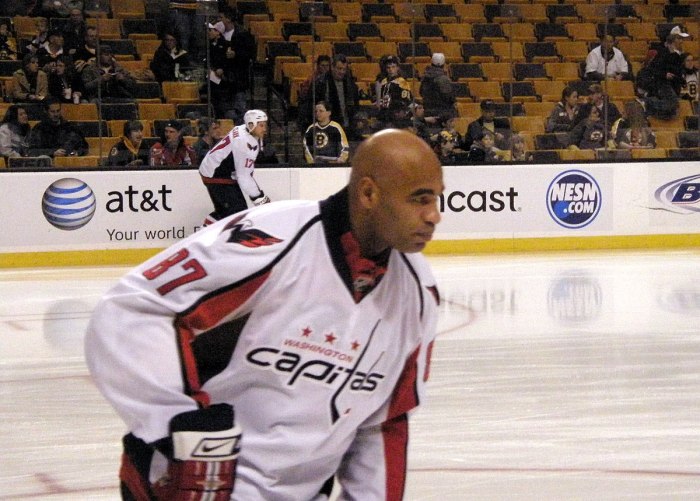 Donald Brashear, veteran of 16 NHL seasons and over 200 fights, now works as a Tim Horton’s cashier. The national Canadian media felt this was a story we needed to know about (even if the National Post was unconcerned about what Brashear looked like, running a photo of fellow black enforcer Georges Laraque in his place…). But why did we need to know this? The articles were brief, but all followed the same formula – Brashear is a “former millionaire player” who has recently “found himself entangled in legal and financial problems” and now works a service industry job, coded as a fall from grace to which readers are encouraged to feel superior. Social media users were quick to identify this as “job shaming”. One commenter responded:

Donald Brashear working at a Tim’s Horton is not “sad” or “pathetic.” He’s actually working to take care of himself and nothing is wrong with that. What it is, though, is a cautionary tale of when you make millions of dollars you need to be wise with it and protect your future.

While that’s not untrue, I think there is more to learn from how we talk about Brashear’s new job than to manage your money better.

The framing of the story is that it is shocking a NHL player would “fall” to an entry-level job, but many players, especially enforcers have rough lives after hockey. In recent years, there have been stories on how Stephen Peat and Matt Johnson have experienced homelessness. Patrick Cote went to prison for robbing a bank. Brashear himself was arrested for cocaine possession in the summer. In 2015, Victoria Silverwood analyzed how, in the wake of several enforcer suicides, the quick rush to blame concussions alone meant “we are ignoring a far bigger problem – not of a broken brain, but of a broken culture.” She outlines that during their careers, players live in an isolating hyper masculine world and often develop an over-reliance on prescription painkillers and alcohol; and, after their career, struggle with losing the identity that has defined them for their entire adult lives.

In 2011, Mark Norman wrote a detailed analysis of the New York Times series on the late enforcer Derek Boogaard, arguing the story was not really about Boogaard, but rather how the structure of men’s professional hockey is complicit in producing the damaging physical and mental toll demanded of fighters. Norman notes how elite teenager players abandon all other life possibilities with the single goal of making the NHL. Junior hockey actively encourages this tunnel vision, and only recently has even high school education become compulsory in junior hockey. Coaches and older teammates often put social pressure on the bigger, but less skilled players (especially if they are black or Indigenous) to fight as their last hope to move up the ranks. With the role comes constant pain. Addiction to pain killers and other drugs are common threads in enforcer stories.

The same threads of social pressure, training for a single goal, and pain management are apparent in Brashear’s story. But Brashear’s story is also one, that from another angle, could be framed through the media’s much loved resilience framing. Brashear was born into an abusive household and then put in foster care when he was 7 because his white mother’s new husband didn’t want a black step-son. Yet he “worked hard”, focusing himself on hockey, to “beat the odds” and played over 1000 NHL games. His mother commented to the Washington Post, “what else would he be? He has all this aggression… Instead of fighting back the people that hurt him, he fights the people on the hockey [sic].”

But it was not what Brashear wanted to be! Brashear would have preferred to be something else. In the same Washington Post story, he says “to tell you the truth, I never liked fighting. I always wanted to be the type of player that plays hard, hits, body checks and scores some goals. But that’s not what they [coaches and management] wanted me to be.” In Vancouver, Brashear was traded because he wanted out of his enforcer role to focus instead on crash and bang forechecking. His only choice to stay in the NHL was to keep punching.

It’s a truism that hockey teaches life lessons, but it’s difficult to figure out what hockey taught Brashear beyond violence as the correct way to deal with trauma. People in hockey saw that Brashear was aggressive and only saw it as fuel for face punching rather than someone who needed help and support. Harnessing this aggression lead to a cycle that just displaced his trauma, enabling his success on the ice, but doing nothing to prevent future barriers such aggression could cause. Twice Brashear was charged with assault off the ice, because aggression isn’t easy to turn on and off.

Brashear prolonged his hockey career until he was 43, playing and fighting in Quebec’s notorious Ligue Nord-Américaine de Hockey (and a 12 game stint in Sweden, where he did not have to fight). Forty-three is ancient in hockey terms, but too young not to find something else to do with your life. As Courtney and I wrote in January:

Women’s sports, on the whole, is far more interesting than men’s sports. That’s right, we said it. We make this assertion based on the fact that women athletes have to cultivate a life outside of the playing field, even if only to make ends meet.

In addition to women’s hockey being more interesting, it’s a lot healthier in the long term (though obviously unfair in the short-term salary wise) because there is something to do after the highly regimented, narrow world of playing in the NHL. Brashear tried, but bad real estate investments led to his company going bankrupt. He had capital from his playing career, but no particular skills or knowledge. This is not to say it’s impossible for former enforcers to find post-hockey lives, as many do. But we should understand the path is not easy.

So Brashear is now working at Tim Horton’s run by ex-teammate Pierre Sévigny, a new, and less lucrative, spin on how many ex-NHLers depend on the old boys club for post-playing jobs. This is not a cautionary tale of being wise with your savings, but a reminder of how quickly the “success” of resilience narratives can crumble if we don’t address the issues that required resilience to be necessary in the first place. The NHL dream career ultimately doesn’t “save” people, but only delays their abandonment. Once Brashear’s body was finished giving and taking abuse for viewer’s pleasure, his problems were once again his alone, likely worsened by the toll of physical injury, rather than healed. And now his body again becomes a source of entertainment, in the incongruity of seeing the former NHL tough guy serving coffee at a drive-thru. In his time as both a fighter and a service worker, no one sees Brashear as a person who is trying to clean up his life in a world where a criminal record and only a high school diploma make getting a decent job difficult — he is just a body. This post tries to write empathy back into the narrative around Brashear. Rather than mock his new job or decry the coverage for job shaming, we need a hockey culture that actually prepares men for life after the game by treating them like citizens while they are employees of the game.