Kelley Lee Gilmore (@profplum8), PhD. is a Tier 1 Canada Research Chair in Global Health Governance in the Faculty of Health Sciences, Simon Fraser University. This is Kelley’s second post for Hockey in Society.

As a self-confessed hockey obsessive, in serious withdrawal since the sudden suspension of the National Hockey League (NHL) season on March 12, 2020, I am among millions of fans who are excited by potential plans for return-to-play this summer.  However, as a professor of global public health, studying coordination of cross-border measures during the global response to COVID-19 pandemic, I remain concerned about how the league will “find a way” to hold a modified playoffs. We now know about the agreed format of the 24-team march to the Stanley Cup. What we don’t know is how these 24 teams spread across two countries, and with players from 17 different countries, will keep their personnel (along with the communities in which they will play) from contracting and transmitting the novel coronavirus.

At the heart of the NHL’s tentative plans, for which details are still thin on the ground, is the creation and maintenance of virus-free “neutral-sites” in two hub locations.  For this purpose, the league has shortlisted cities with lower numbers of current and projected infections, along with well-performing public health responses in place. In these locations, groups of teams from the same conference will gather to determine which two teams will go to the Stanley Cup Final. Importantly, if this plan is to work, the NHL must prevent any SARS-CoV-2 infections from entering these bubbles, and conduct ongoing surveillance to immediately identify any cases that occur within the bubble during the many weeks of the playoffs. It is a daunting challenge.

The critical role of virus testing

To maintain NHL hub locations as virus-free “bubbles”, once formed, there will need to be highly controlled movements of people in and out, alongside extensive testing of everyone once tucked safe inside. Commissioner Gary Bettman describes preliminary plans for the league to test all participating players and personnel each evening, with results to be available the next morning. There are two types of tests that players could undergo: viral and antibody. Viral tests determine if a person is currently infected with the coronavirus and thus capable of infecting others, even if asymptomatic. Antibody (serologic) tests determine if a person has previously been infected. It can take 1-3 weeks after infection to make antibodies that can be detected by testing. For these playoffs, the NHL will use the viral test although, until an effective vaccine is available, antibody tests may also become a part of the league’s return-to-play planning. Importantly, in the use of either type of test, the key word is reliability. The results from either provide likelihoods of current or previous infection but neither provide 100% certainty. There are known problems of false negatives and positives which can lead to errors in practice and worse outcomes. Antibody testing is especially uncertain at this time. While there are around 200 different tests under development worldwide, spurred by a desire to create “immunity passports” as the basis of reopening societies and international borders, many promising tests have subsequently proven inaccurate. Testing is made even more challenging by unknowns about the strength and duration of immunity bestowed by the virus on those infected.

Before any pucks are dropped, the NHL will need to specify in clear detail how daily testing fits within a broader strategy of prevention, detection, and control of the virus.  Who is tested and when, and how results are used alongside other measures such as good hygiene, contact tracing, quarantine and social distancing, will determine their effectiveness at keeping the playoffs rolling. Most importantly, what is the protocol if a person tests positive?  Despite all the extra precautions, hockey is a contact sport played by 12 players on the ice at one time often at close quarters. Team benches are also known to be high risk infection areas.

The worst case scenario would be a player testing positive after a game.  Presently, NHL Deputy Commissioner Bill Daly maintains, “Our medical advisors [believe] that a single positive test, depending on the circumstance, should not necessarily shut the whole operation down.  Obviously we can’t be in a situation where we have an outbreak that will affect our ability to play. But a single positive test, throughout a two-month tournament, should not necessarily mean an end for the tournament.” However, the World Health Organization’s guidelines followed by public health officials worldwide, including the US Centers for Disease Control and Public Health Agency of Canada, is that any individual testing positive must isolate for 14 days. If symptoms worsen, health care may be sought. In addition, all “contacts of patients with laboratory-confirmed COVID-19 be quarantined for 14 days from the last time they were exposed to the patient.” If one player tests positive, all players and many staff from both teams would be considered contacts. This could essentially mean two teams are immediately taken out of action for 14 days. A scenario of multiple confirmed cases could shut down an entire 12-team hub. 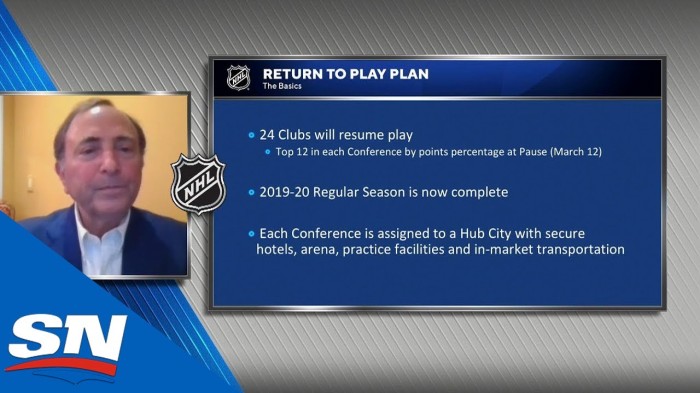 There are many diagnostic viral tests currently available, varying in how they are conducted (nasopharyngeal swabs, sputum) what they are testing (molecules, antigens) and, critically, how long they take to return results. Most tests currently require samples to be sent to laboratories which then take several days to report back. The NHL strategy, however, is dependent on a rapid viral test administered on site (point-of-care) rather than at a health care or specialist testing facility. The problem is that reliable rapid point-of-care tests are presently limited in availability. A number of pharmaceutical companies are urgently developing new tests capable of reporting in minutes, with the Food and Drug Administration providing Emergency Use Authorization. If such a rapid test does become available by the summer, there will need to be sufficient tests for the league to use. With each team limited to 50 personnel, and the modified playoffs to take an estimated two months to play, Bettman estimates that 25,000-30,000 tests would need to be conducted at a cost of millions of dollars. The cost of testing varies, depending on the type of test, ranging from $10-$20 for a viral test, to $100 for a genomic test, to lower costs if a rapid test is developed. Other professional sports leagues are also seeking to start/restart and will presumably also require rapid tests.  If not developed on time, the NHL may rely on the type of sputum tests currently used in Hong Kong for citizens returning from abroad with results available in about eight hours. Players will also undoubtedly prefer spitting into a cup than having a swab placed deep into their nose and throat each day.

As much as players and fans desperately miss hockey, the NHL is hopefully also acutely aware of the ethical challenges of getting players back on the ice. When coronavirus infections were first detected among National Basketball Association (NBA) players in March 2020, and wider testing of players and personnel followed soon after, criticisms were raised about privileged access by professional sports teams to scarce testing resources. Indeed, the reliability and availability of tests became a major focus of concern in the US. Faulty test kits, widespread shortages, and inequitable access are now believed to have worsened community transmission in many American states. More reliable tests have now been developed and are more readily available, with the US now conducting more tests than any other country. Yet, with a population of 331 million people, 17.4 million tests conducted to date represent only 5% of the population. The stark inequalities in number of cases and deaths from COVID-19 along racial and socioeconomic lines raise even more uncomfortable questions. In this context, one might well conclude that professional sports are hardly essential services, and thus entitled to priority access to the scarce resources needed to fight a global public health emergency.  Bettman acknowledged that an ethical return-to-play plan is premised on sufficient testing capacity: “I am told that there can be enough (testing) capacity, and certainly over the next couple of months, there will be more capacity….we certainly can’t be jumping the line in front of medical needs.” However, without any specifics on the type of tests to be conducted, it is not possible to project whether there will be a shortage or not. How the need to stem an estimated US$1 billion in lost revenues this season will figure into the NHL’s ethical stance also remains to be seen.

Beyond testing, there is a duty of care by the NHL to keep team personnel, their families and the wider communities they operate within safe and well. Personnel with underlying health conditions, may be put at higher risk of infection, severe illness and even death. For example, COVID-19 deaths are disproportionately higher in men over 50. Large numbers of NHL coaches, managers and other team staff, let alone Bettman himself, fall into this demographic. But, of course, risks from COVID-19 are not confined to older males. CDC data, to 23 May 2020, reports 542 males between 24-34 years died of COVID-19 in the US. Few people are aware that, in 1919, the Stanley Cup was not awarded in the end because the deadly influenza pandemic decimated both teams. The decision to press on with the series, until Game 6 was cancelled hours before puck drop, cost the life of player Joe Hall. How many infections, let alone deaths, will the NHL be willing to accept to ensure the Cup is awarded?

Finally, from a public health perspective, the primary goal has been to control virus transmission at a level that does not overwhelm health care systems (flatten the curve) until an effective vaccine heroically appears over the horizon. Most people are now familiar with the twin pillars of good hygiene and physical distancing to “flatten the curve.” Engaging in a sport which seems contrary to these practices could send out the wrong messages to a public already “pandemic fatigued.” The NHL could become part of the problem rather than part of the solution.

The virus is setting the timetable

NHL executives are undoubtedly working flat out, guided by the advice of medical and public health experts, to figure a way to stage the playoffs safely in uncertain times. This article focuses on the difficulties of testing. But there are other logistical factors to consider – how will the league navigate cross-border restrictions between Canada (with lower numbers of cases and deaths), the US (the world’s coronavirus epicenter) and other countries where players have been sheltering?  How will personnel safely move between the two hubs? What is the legal liability of the NHL should personnel should fall seriously ill?

Perhaps, most importantly of all, there are many aspects of this novel coronavirus which are out of the control of public health officials, presidents, and even NHL commissioners.  The virus is throwing up its fair share of scientific puzzles. The role of asymptomatic transmission is highly worrying. The long-term health effects of infection on the human body remain unknown. The development of an effective vaccine is far from certain. The mutation of the virus, and the possibility of the disease becoming endemic and seasonal, is now being seriously considered by virologists and epidemiologists. These uncertainties mean that the virus, and not people, are setting the timetable. The battle against this pandemic is far from over and the NHL may have to play the long game.

One thought on “[Guest Post] Testing times for the NHL playoffs: Keeping players safe during the COVID-19 pandemic”